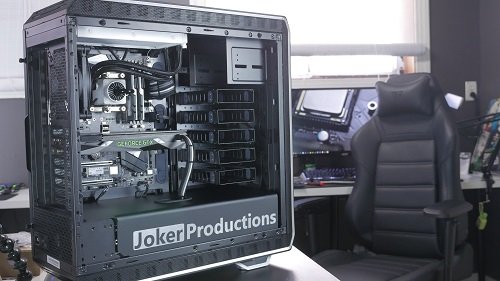 Today I’m going to be walking you through a $2,000 2017 Gaming PC Build which I’ve code named as Frame Raider. Clearly this a play on words. Framerates and also being that the build is Silver & Black. It fits the aesthetic of my favorite football team the Oakland Raiders. I thought it was catchy so Frame Raider it is.

The goal of this $2,000 build was to be able to get the most frames per second possible on PC games without any CPU bottleneck getting in the way. Up until recently, I’ve been gaming on an i7 6800K which is a six core/12 threaded processor from Intel that I keep at 4.3GHz. However, after testing that CPU against the i7 7700K in this build which I was able to overclock to 5GHz at 1.365v it was clear that the faster quad core was going to be more beneficial to deliver high FPS.

For those who need additional cores, we’ve also tested the recently released Ryzen 7 1700 against the i7-7700k in games. It’s definitely worthy of consideration at this price point.

In our graph you can see that the slower speeds on the i7 6800K hold back the Nvidia Geforce GTX 1080 from its full potential. The reason for this is that for every frame your graphics card processes, it also needs the CPU to deal with that and deliver it to the end user via the monitor. When the processor falls behind here it likely won’t be very noticeable to the enthusiast user out there until you see a side by side comparison like this which makes it crystal clear, even an X99 based i7 6800K with six cores can be a hardware bottleneck to an enthusiast set on achieving 144fps.

Of course, the GTX 1080Ti, might be preferable for some of you at this point. You can take a look at our GTX 1080 Ti vs 1080 ultrawide benchmark here. 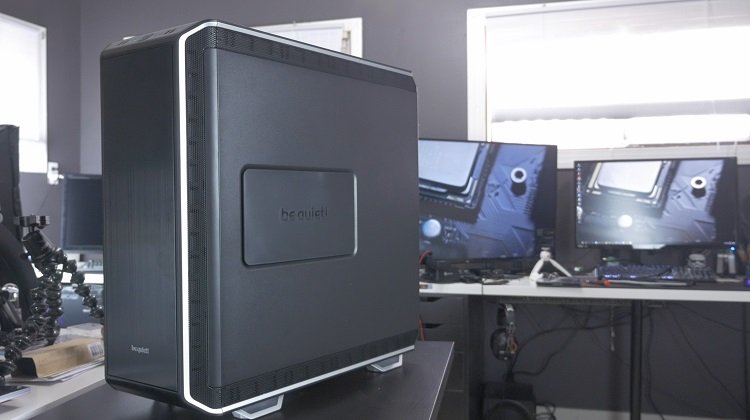 Starting off with the case we have the BeQuiet Dark Base Pro 900. This is the silver version which means it has these silver accents going around the chassis as well as the feet on the case. You can also get these in all black or with orange accents. The exterior is brushed aluminum primarily, but we do also have a tempered glass side panel so we can see all the goodness that is inside. Overall, it’s a good and quiet case if you’re willing to spend a little extra. 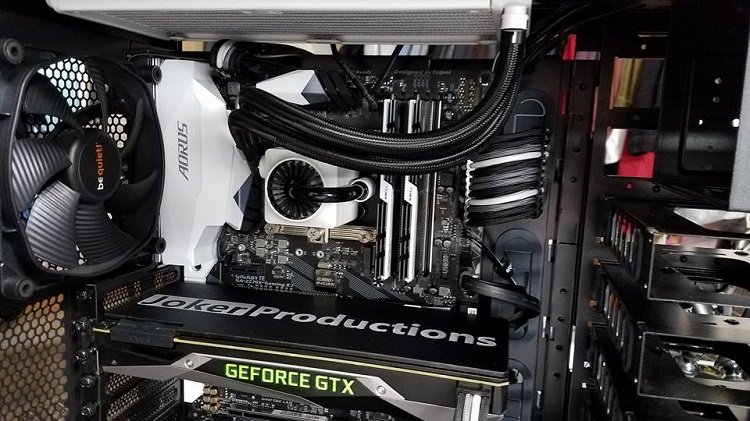 I chose to do a top mounted radiator this time around with the Deepcool Captain 240 EX because the white really fit in with the monochrome color scheme. The Case does support up to 360mm radiators if you want in the top and front, although that would require removal of the dual 5 ¼” bays as well as the 7 hard drive sleds, each one capable of housing a single 3.5” mechanical drive or two, 2.5” SSDs. 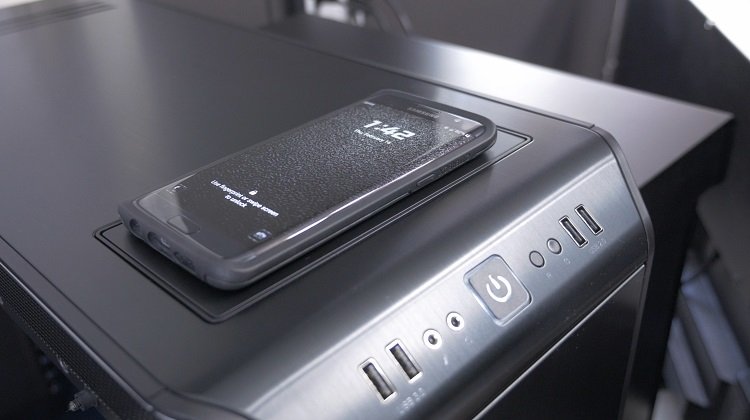 The last feature I wanted to show you on the case that is really cool and kind of separates it from other enclosures on the market is the wireless charging on top. So for smartphones that support it like my S7 Edge, you can just put your phone here any time you need a quick charge with minimal effort. 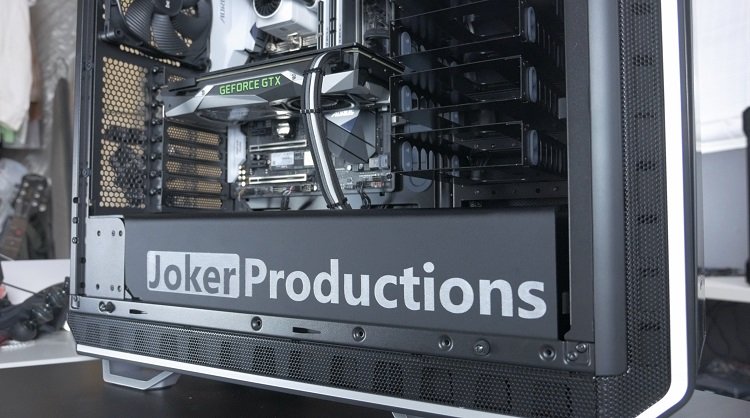 The only drawback for me on this case was not having a power supply cover which is a feature I love to see in cases to help hide all the cable mess down in the basement. Thankfully though,  there are now places we can go to get things like custom power supply covers. The one I’m using here that has my Youtube channel art was provided by V1Tech.com along with the sleeved cable extensions and the backplate cover for our Founder’s Edition GTX 1080.

I opted to get mine done on a matte black material with silver colored engraving, but you can do LED lighting on these including RGB, glossy, or whatever. You can pretty much work with V1 Tech to get the shroud exactly the way you want it.

The power supply in our $2,000 custom PC is the Bequiet Dark Power Pro 11, 1000W which is semi-modular. The 24-pin connector does come pre-attached and cannot be removed, but V1 Tech helped out here with custom extensions as well to tie everything together and kept them clean with nice cable combs. 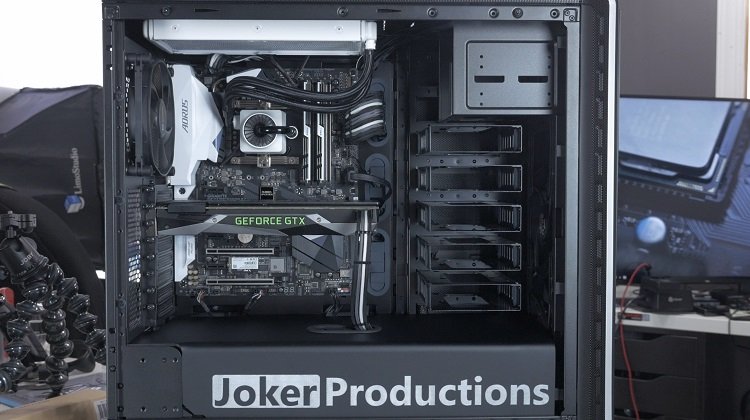 For connectivity on the Gigabyte motherboard, we do have PS/2, USB 3.1 Gen1, Displayport as well as HDMI which is HDCP compliant, a red USB 3.1 Gen 2 port and type C connector. Rounding off the rear i/o we have dual gigabit lan ports, 2x USB 2 and two more USB 3.1 Gen 1 ports in addition to all our audio ins and outs.

The RAM in this build is the G.Skill TridentZ DDR4 which supports an XMP profile capable of hitting 3200MHz which was supported by this motherboard. I didn’t have to do any tweaks to the timing to be able to get that to work smoothly. Just like our case, this RAM kit has a sexy brushed aluminum exterior making it one of the nicest memory kits I’ve had the pleasure of working with.

Thankfully we’ve also got nVME support so I am utilizing the 256GB Adata XPG8000 which is just stupid fast. The PC is able to boot up in just a few seconds. Running CrystalMark I was able to see the nVME drive hitting sequential read speeds of over 2000MB/s and write speeds of over 1000MB/s.

I did a comparison to the 512GB Adata SU800 which I’ve also installed in this build on one of the rear mounted hard drive cages to give you an idea just how much faster an m.2 drive is capable of being of a standard SATA drive. Because of the much faster read speeds, we will be using the XPG8000 as our primary boot partition, while the SU800 will be tasked with storing our games to ensure quick load times.

All said and done this build comes in at just under $2000 when not including the custom parts from V1 Tech so somewhat reasonable I feel considering the performance it can deliver like we saw in that comparison to the 6800K. The GTX 1080 has been powering all of my 1440p gaming needs since I bought it so I’m excited to have it in Frame Raider now along with a 5GHz quad core so I can see its full potential in games.

Looking for a quick parts list for this PC Build? Here’s all you need to know.