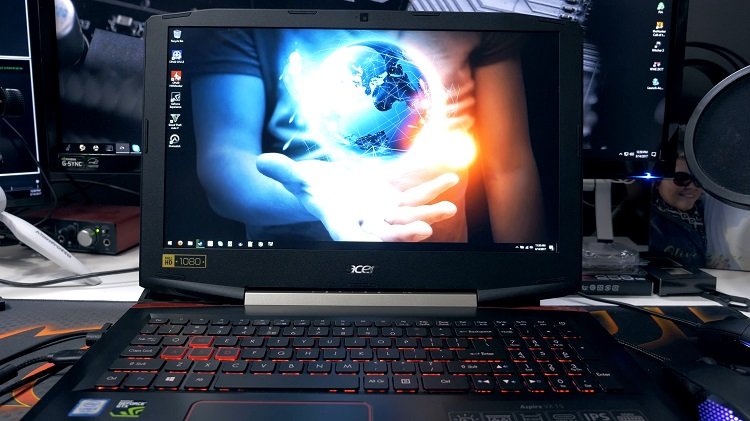 Today we’re reviewing the Acer Aspire VX 15 which is a performance gaming laptop that’s available for around $1,000 or for just under $800 depending on the options you choose.

While the included 256GB SSD was blazing fast at boot speeds and load times it was not enough storage to hold the 10 games I benchmarked here for this review so I would definitely look at purchasing a second 2.5-inch drive so you can fit more than a few games. However, if you do want to add a second drive it will require some additional hardware from Acer to mount it in the laptop. Thankfully they are providing that free of charge on request, but I’d like to see this included along with the laptop to make the process easier on the end user.

As the Acer Aspire VX15 comes in several different variations in 2017, here’s a look at the differences between them. Models include the VX5-591G-5652 (which we’re benchmarking), the VX5-591G-7061, VX5-591G-75RM, and VX5-591G-76RK. Other than the core hardware, the laptops are the same. Here’s a look at the various options you can purchase. The VX 15 also made our list of the best gaming laptops and laptops for college students.

The display on here is a gorgeous. It’s a full HD 1080p IPS display. That means great viewing angles and accurate colors. When you put full 1080p on a 15-inch display you get a very tight pixel density of 147 pixels per inch. It is just a 60hz display here and also no G-Sync, but you won’t see those features on a laptop this affordable. 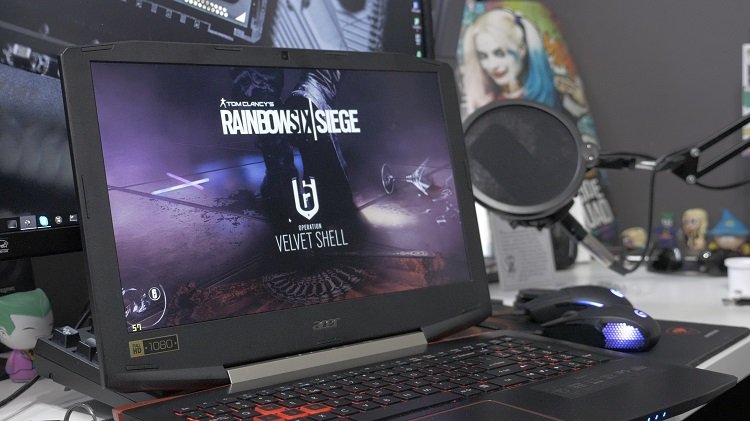 For our connectivity, we have a Kensington lock, power charging port, USB 2.0, an SD card reader and a headphone output. Unfortunately, no microphone input was included on here. On the other side, there’s a USB type C connector, Two USB 3.0’s, HDMI out and lastly an RJ45 LAN port.

For charging the laptop there is an external power brick included, although it’s on the smaller side so not too much of a burden. 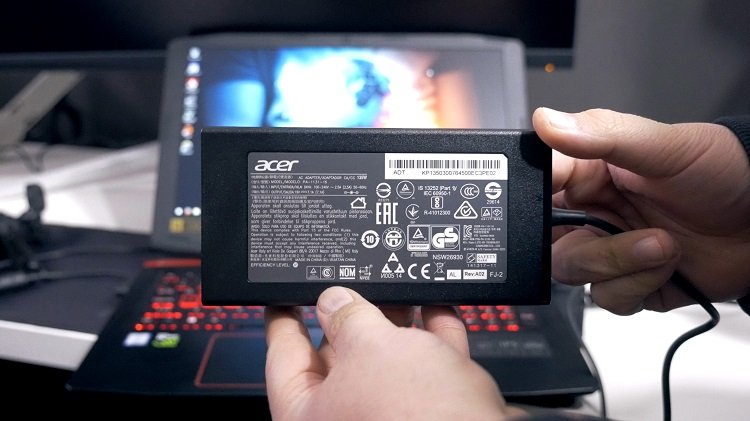 The keyboard is your standard chicklet style membrane keyboard we see on most laptops these days. It does have the option to enable or disable red LED backlighting for the entire keyboard. 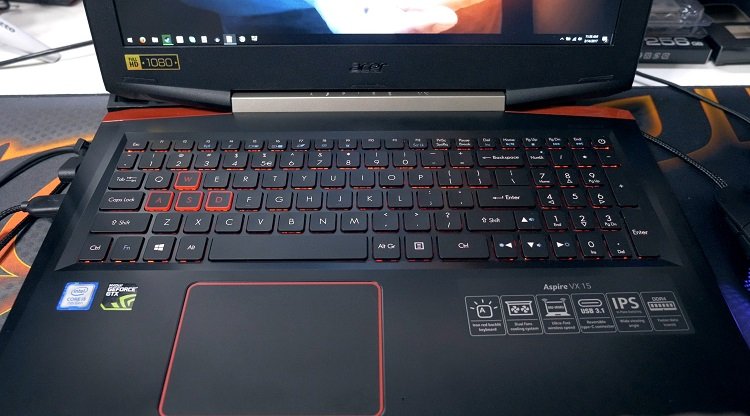 The i5 7300HQ is advertised with a Turbo Boost of 3.5GHz and it was able to hit that at times during games. However, I found 3.3GHz to be a more consistent boost speed during multi-threaded workloads and gaming.

After running the CPU-Z stress test for an hour the CPUs highest temperature was 69C on one of the cores. This is well within safe operating temperatures so I didn’t feel temps limited our CPU in any way.

Having a speed over 3GHz on an i5 processor in a laptop is a pretty nice speed and there were only a few titles that got CPU bottlenecked. GTA V and Battlefield 1 being the two biggest. There were several times while benchmarking GTA V that I would see the GPU not being fully utilized, but the CPU was at 100% load. However, this is not a major concern for me as all the games I tested still delivered a very playable experience.

The GTX 1050 proved to be quite the little 1080p workhorse. I regularly saw my core speed boosted at 1645MHz and it never crossed over 70C. I tested here in 10 games that I thought would appeal to people seeking out a mobile gaming solution like this for under $800.

All of the games we tested were at High settings and native 1080p resolution. For Rust, I used the “Good” preset as they use a different naming scheme than what most games do. Rust was also the only game that really struggled to run on this laptop. That’s likely due to engine optimization with Rust. I was running the DX11 client version so if you have any suggestions for better 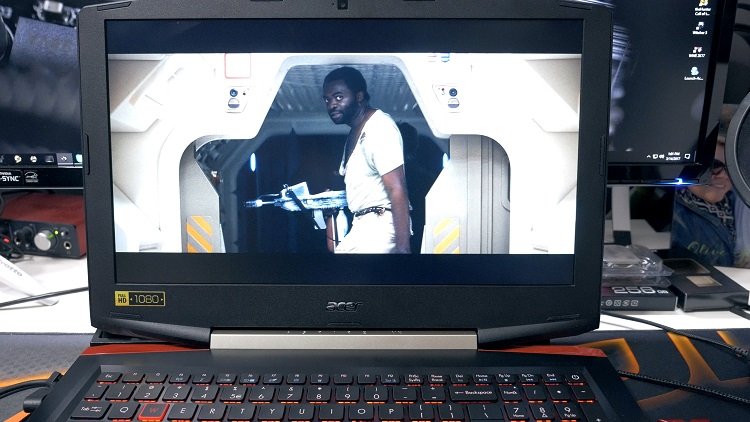 In all our other games though you can see that the VX15 is more than capable of powering modern titles at over 60fps average and only coming down below 60 on the minimums in a couple of games. On a positive note, games like Rainbow Six Siege and Overwatch run like an absolute dream. I tested them at high settings. In a game like Overwatch, you shouldn’t have any issues maintaining 60 frames while bumping that to the ultra or epic preset.

CS:GO and TF2 both over 100fps average and never went below 60. GTA V, in one of the most demanding areas of the game, Sandy Shores held an average of 67 FPS with a minimum of 52. This was one of those games that really pushed the CPU and GPU to their respective limits so it’s nice to see it can even power that.

In conclusion, I can wholeheartedly recommend the Aspire VX15 in this configuration. The CPU and GPU are both able to keep with modern games. At just under $800 this is an amazing entry level gaming laptop that would be perfect for students that want to game in the dorms and have something lightweight to carry around to class. The laptop comes in it just about 5 pounds. So it should be easy to haul around campus or travel with as well. 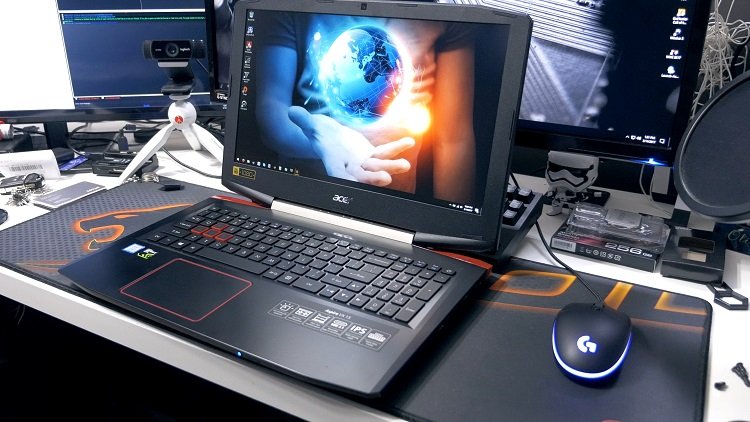 I also love the aesthetic on here. I’m not usually one for the typical black and red gamer look, but Acer knocked this one out of the park. The plastic back which gives the look and texture of brushed aluminum is stunning in my personal opinions. When it comes to the appearance alone, this is one of the nicest looking laptops I’ve seen.

If you want to pick up the Acer Aspire VX 15 laptop, check out the pricing in the table above. If you have any questions I didn’t answer, please don’t hesitate to use the comments section as I’m pretty active down there.