We have had 4K monitors for a few years now and shortly after that, 4K gaming monitors with features like G-Sync started to crop up.

Until now, many of these displays were limited to smaller sizes that resulted in less than ideal desktop scaling.

Combining the G-Sync technology with a 32” IPS gaming panel with a 4ms response time which is just right for gaming at 60Hz, comes in at a whopping $1299.

To justify this cost we really do have to look at the sum of its parts.

While gaming would look jaw-dropping with a 4K pixel density on smaller displays, it left many people wanting a larger option for desktop use. The problem with 4K is that text and icons begin to look incredibly small due to the scale of the resolution. To put it into perspective, imagine everything on your desktop shrinking to 25% its current size if you are currently operating natively on a 1080p screen.

I’ve actually been using a 40” Korean VA panel for over 6 months and the scaling at that size is fantastic, but I understand that a 40-inch display is not practical for many people. This display also lacked any G-Sync feature which is something I’ve used since its inception and covered deeply with the Acer XB270HU, Asus PG278Q and more recently, the 1440p Acer XB271HU. I also consider it to be mandatory to have one of the modern adaptive sync technologies. Frame stuttering and screen tearing are things of the past.

As a part of this review I’m also testing the smaller 27” version of this display for comparison, the Acer XB271HK. While the performance and specs are identical, the big difference is the size and how that affects scaling at the desktop and gaming.

For many people, a 27”4k display could be a real concern if you have trouble with small text. Desktop scaling has improved with Windows 10, but that doesn’t guarantee it to be supported well in all applications. The 32” version, the XB321HK, solves this very well giving the user ideal pixel scaling at the desktop. I found I did not have to resize any applications or websites on the 32” display, while the 27” I did have to do a fair amount of tweaking.

I certainly dipped my toes in the waters of 4K gaming on my powerhouse system with dual-GTX 980 Ti’s in SLI and an i7 5820K and it was a sight to behold. Modern games that spent the time putting additional detail into textures really opened my eyes to what lower resolutions are missing out on.

This was quickly washed over though by the feeling of the loss of my smooth 60fps gaming that I had become accustomed to at 2560×1440. Actually, I was gaming at 144hz so 60hz was an adjustment, getting below 60fps was just not an option for me even with G-Sync so I opted to play many demanding titles like Tom Clancy’s The Division in 1440p.

I found this gave me excellent performance at a solid 60fps with performance to spare. On the 32” display anti-aliasing was more of a concern due to the larger screen size so having a strong AA solution is a must I think in games at 1440p on a 32″ screen. On the 27” gaming monitor this was not an issue as it felt the same as playing on my 27” 1440 monitors.

I realize this could create some controversy and there will be those that say 4K or nothing, but I just personally prefer to have comfort in a smooth gaming experience with all the options turned up. And even with my SLI gaming system, it is still just too demanding in some of the newest games out there, but when it can run 4K at 60, I certainly take advantage and it is glorious.

One of the greatest things to me as a power user and video editor is the additional screen real estate offered at 4K. Going into Sony Vegas, Premiere or Photoshop gives the user a large full 1080 workspace with zero compromises. 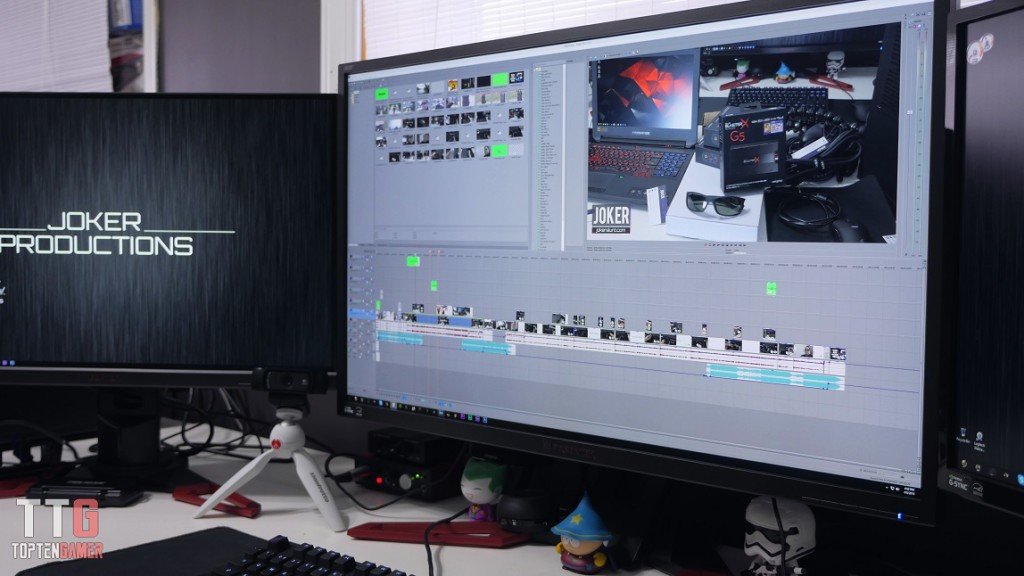 Even though this is a gaming panel, it still sports a 100% sRGB rated, IPS panel that is perfect for the person that wants to split their time between stunning visuals on games and doing accurate color work for film and photo editing.

I’ve also been incredibly impressed with the deep blacks here on both the 32” and 27” monitor that I feel even rival those of my VA panel. For those not familiar, VA panels are notorious for being able to deliver some of the best blacks you can get while IPS has a better color range and viewing angles.

Acer has a complete overhaul on their Predator gaming lineup with an aggressive gamer aesthetic. With its large red feet sticking out from underneath it gives a wide base that is needed to support the heft of the display.

The 27” version simply screws in at the base which is detached, while the 32” requires a bit more support with an adjustable arm bolted into the back that anchors into the feet and tightens into place. Thankfully they’ve even maintained height adjust functionality in addition to tilt. I’m really glad they didn’t opt to leave out the height adjust like some other monitor manufacturers producing large displays over 30”.

Also along in the box you thankfully get an HDMI and Displayport, the latter of which will be required if you are planning to take advantage of the Nvidia G-Sync technology.

To wrap things up, you are getting an amazing display in the XB321HK. The colors pop thanks to its IPS panel and when you combine that with G-Sync on a 32” 4K display, you know exactly what you’re doing. I think this display fills a niche that is not welcoming to everyone because of its $1299 price tag, but if you are the type of person that needs a professional monitor that can also game and want zero compromises, then that is why Acer have created it.

I’ve fallen completely so head over heals for 4K and the desktop experience that I’ve walked away from 144hz gaming and haven’t looked back for one second because of the value to me as someone that spends more time at the desktop than I do gaming. For most of you, that is not even a hurdle you will have to overcome if 60hz gaming is all you’ve ever known and you can consider yourself lucky on that account.

The last point I wanted to drive home was how seamless it was for me to use either the 27” or 32” Acer panel for gaming at 1440p so that I could still get a silky smooth gaming experience on demanding titles. I did not feel as though I was missing out on anything and when you can take advantage of 4K then you will love it. It is the future.