Can You Use A FreeSync Monitor with an NVIDIA Graphics Card / GPU?

Looking for a budget 144Hz FreeSync monitor but have an NVIDIA graphics card? Unfortunately, you can’t use FreeSync along with this option. However, I recently grabbed the Pixio PX245C to see how it would perform. Mainly, I wanted to try out the compatibility of it and see how smooth it would be. You might be up for an option like this again if you’re looking for an inexpensive 144Hz monitor or you’re planning on grabbing an AMD graphics card as your next choice.

For the system, we used the GTX 1060 Founder’s Edition, a RX 570, and the FX 8370. So, this is a very basic PC we’re using to see how the frames work at both high and low settings. This is because there are a couple of things to consider with FreeSync. One advantage is that it can help eliminate stutter when you drop below the monitor’s native refresh rate. 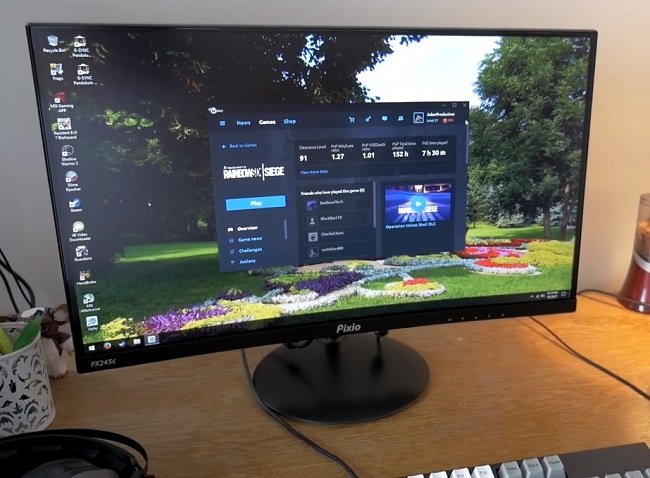 If you had VSync on and you’re using a 60Hz or 144Hz screen and you drop down below that number, that number would instantly be cut down in half to 30 or 72 frames. With a FreeSync or G-Sync monitor it keeps this completely smooth whenever your frames drop, thus avoiding that lag spike. This is where Adaptive Sync technology comes in.

The other thing that it helps with is overcoming the tearing that can happen if you go over your screen’s native refresh rate. For example, if you went over 144Hz you should see some visual tearing in your screen without FreeSync or G-Sync. Of course, if you use an AMD card with G-Sync or NVIDIA card with a FreeSync monitor, you wouldn’t get those advantage. So, as I mentioned before, we’re here to monitor the smoothness of the setup instead.

Rainbow Six Siege with the GTX 1060

I play this game almost daily. So, it’s a good game to test for me. We’re hovering around 60 FPS with the game maxed out other than 2xMSAA. Going up to 8 x MSAA we go down to the 30s and of course, lose a lot of that smooth feel. Would FreeSync save that? We’ll find out when we switch to the RX 570. However, if you’re going down to the 30 or 40 FPS range it may still not have what you’re looking for.

Now, I’m getting rid of HBAO+ and turning off the anti-aliasing in order to reach around 90 frames per second. It’s buttery smooth and actually feels very similar to my 144Hz G-Sync display even though I’m using a FreeSync display here without it enabled.

Honestly, I wouldn’t have any issues running my games like this full-time and you wouldn’t be missing out on too much with VSync off. I doubt many people would spot much of a difference. Dropping it down to low the game still looks great. We’re coming up over 144 FPS here and the tearing is not very noticeable at all. So, I have no issues here with frame variance or even going over the monitor’s native refresh rate. And honestly, I don’t really notice much difference between this and the $800 G-Sync monitor I typically use.

Rainbow Six Siege with the RX 570 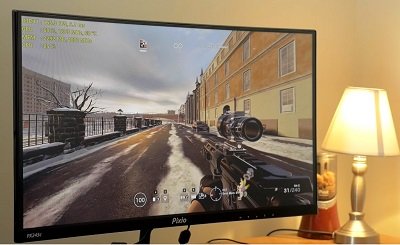 I have this game pushed up to the max and we’re hovering around 90 to 100 frames per second. It’s very smooth with FreeSync turned on. Ramping up the AA to 4x MSAA we’re in the 40FPS range. I’m struggling to feel a lot of difference between this and with the GTX 1070 as I can definitely still feel the input lag when we’re in the 40FPS range. So, even with FreeSync on there is a fair amount of what feels like input lag to me. It’s either that or the frame drop between where I typically play at around 144 and now at around 40FPS. Overall, FreeSync won’t really make 40FPS feel more smooth but does make the transition feel more smooth. Hopefully, that makes sense.

So, between this and playing with the NVIDIA card with VSync off the difference is fairly minimal. So, the take away here is that if you have a 144Hz display with VSync off, you’re more than likely ok. This is especially true as you’re unlikely to go over 144 FPS in most games.

Gaming with a FreeSync monitor and an NVIDIA card worked a lot better than I thought it would. I wasn’t able to tell a big difference with the monitor between the NVIDIA and AMD cards. I think you will see smoother transitions if you’re planning to run VSync along with Freesync. However, with it off, it was a very good experience overall.

Overall the takeaway here is that, I’d play with VSync off with a 144Hz monitor. On a 60Hz monitor, this might change substantially. This is especially true if you’re getting over 100 frames. However, on a 144Hz screen, it was really very smooth overall even with high or low frames.