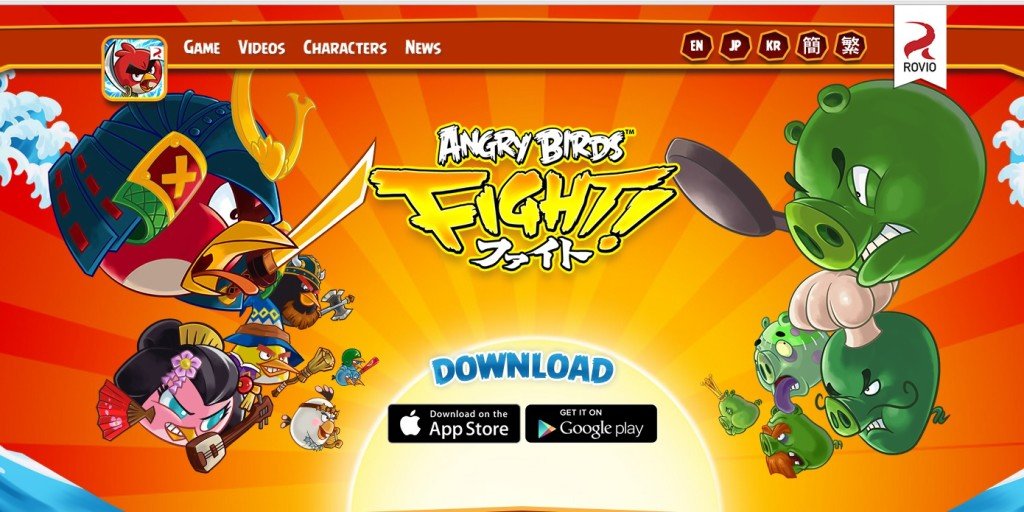 Rovio’s Angry Birds Fight is a game I picked up several weeks ago that’s started to grow on me. I certainly wasn’t going to write a review on it; however, after seeing the misinformation on other review sites about the game, I thought I’d try to offer my insight.

Angry birds fight is a puzzle game that combines puzzle solving with RPG elements including bird levels, items, and a storyline. It has a real-time rank system for fighting and various challenges that Rovio changes week to week. Unique items can be found through these challenges and depending on where you rank at the end of a certain challenge, you’ll be given certain rewards or items.

Understanding the most important Rules of the Game should help you to understand what you need in order to achieve a high ranking.

Quickly matching panels will give you bigger and better combos as you go. 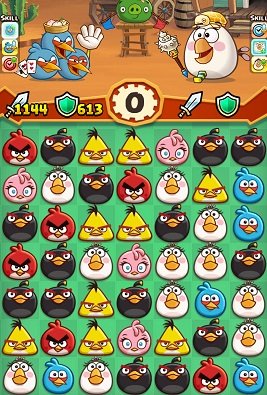 Matching your Color of Panels:

If you match the color panels of the bird you’re using, the attack and defense points are doubled.

When you match up 4 panels of your bird’s color you sabotage your opponent. The type of sabotage is based upon the color of the bird you’re using. We’ll go over sabotages and which we think are most effective in a minute.

When you match five panels you trigger fever time. During this time, you get twice as many attack and defense points by matching panels. In addition, an angry panel appears which you can click on to sabotage your opponent at the perfect time.

At the end of the match, there is bonus time which randomly erases panels on your screen which count towards your overall score.

What are the best items / item Powers in Angry Birds Fight?

Items for birds include hats, weapons, and accessories while items for your ship include the hull, the bow, and the mast.

Items are ranked in the following order; C, B, A, S,  and SS. C and B items can be found while battling or completing missions while A, S, and SS items can only be found by completing in-game events or using gems to open an item from the Slots or Mighty Eagle’s treasure box. The higher the rank of an item the better stats it has and the more effective its item power.

You can use your coins to upgrade the items you have up to 3 times each. The higher the rank of an item the more expensive the upgrade and the greater overall defense, attack, or health boost to the item itself.

A big part to having success in Angry Birds Fight is understanding the item rankings and powers. Here’s a quick look at some of them. Some obscure or special mission items have been excluded as well as items I simply didn’t take a picture of. These include power cancelation as well as a bonus against those of higher level. The SS items have a sort of golden ring around them or throughout which is more powerful than the same power at a lower item rank. 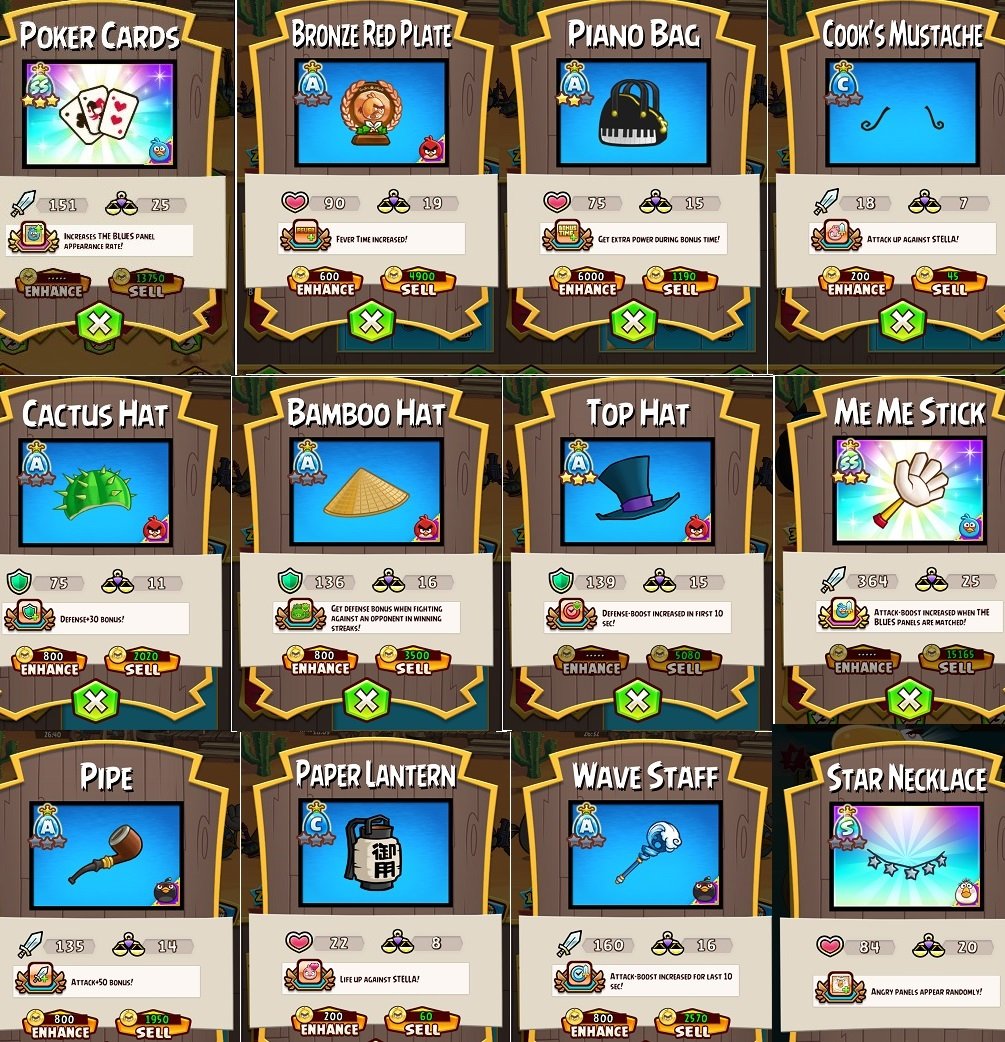 In my opinion, the ultimate goal is to get 3 SS items. Keep in mind that the golden item powers are much stronger than their counterparts.

These 3 work together to make your bird very difficult to beat – especially if you have all 3!

If you don’t have one or any of these, I suggest you use the strongest hat or weapon you have while using an A level panel appearance item if you have it.

Ranking the Best Angry Birds Sabotage from First to Worst:

While all the sabotages can be ignored in some way, there are a few that can really slow you down. I’ll do my best to rank them from best to worst from my own personal opinion.

Bomb: Making all your panels black and white seems to really have an affect on me personally. Over time, if you’re able to remember the faces of the panel you might be able to get over it. Still, Bomb’s sabotage makes it rather hard.

The Blues: Blue paints your panels in a way that makes it hard to see what they match with. I’ve often wondered if the painted panels you match also don’t count towards your overall attack and defense. While blue can be ignored for the most part upon the first sabotage, it’s relatively difficult to do anything if Blue starts to get on a role and can really get in the way by the end of the match. This is especially true in later levels where many players have the panel appearance increase item.

Red: While the boxes are a little annoying, I can often get rid of them entirely within a second and while I’m still matching other panel pieces.

Chuck: Chuck leaves a line in your screen horizontally that can truly get in the way of you matching that 4-panel line you’ve been planning for. On the other hand, if you don’t happen to be working on the part of the screen where Chuck sabotages, or can easily switch to work another side, it can often simply be ignored.

Matilda: Matilda’s sabotage digs a line in your opponents board vertically. Players can play around this sabotage much in the same way they do Chuck’s.

Stella: Stella sabotages her opponents by blowing bubbles onto their screen. Since you can see through the bubbles rather well, this seems to be fairly inconsequential. I would thus put it in last place.

Don’t agree? Vote for the best sabotage below!

Overall, Who is the best bird?

Rovio has done a good job making all the birds fairly even. At first, the best idea is to use the bird you have that happened to get the best equipment from the slot. That being said I’d say the best bird would ultimately be the one with the best power with the best sabotage being somewhat of an afterthought.

In my opinion, this would be Red.

While all birds get to use all of the 4-panel powers to some extent keep in mind that the bird of the same color that has an item which increases panel appearance rate will get it more. Since the red power also gets rid of red panels, it gives it a big advantage vs other birds.

Don’t agree? Vote for the bird you think is the best below!

Tips for Increasing Your Win Percentage in Battles

First of all, there’s a lot of good information above this, so be sure to read it as we won’t be listing it twice.

Use both hands. Don’t get lazy and swipe with just one hand when you can use both. It takes less time and makes you a lot faster.

Go for combos. Combos happen when you start to quickly match panels. The bigger the combo the bigger each panel match will give you. Knowing the time between what continues a combo and what doesn’t will allow you to keep things going.

Don’t unlock your other birds on purpose.

Start by trying to get good items for Chuck and Red. Getting good items for two birds is a lot easier than 6. This is especially true when the best items can only be acquired through gems.

Only use gems for slot items.

My son has been playing Angry Birds Fight with me from the start. Recently he started over. One of the reasons was because he was using gems to get more bird energy rather than investing that into his birds. Using gems for energy is a waste.

Don’t have a couple SS items by Levels 12-14? Consider starting over:

It doesn’t take long to start over and get to about level 12 to 14. If you’ve gotten exceptionally unlucky in the slots and still don’t have any SS items, consider starting over. It’s a lot easier to do that than to grind for them later.

Beat all Level 3 challenges to get more gems/items.

When I first play Angry Birds fight I didn’t see the challenge that comes after you move on from an area to another area and from map to map. Swipe up and down to move from map to map and challenge pig ships and boats to get extra gems. Getting 3 stars on all of these will allow you to get a bonus once you’ve completed all of them on a map. This will be where a lot of your gems come from.

Enhance only your best items.

I typically only enhance SS items. As your birds level up and opening slot items gets more sparse, you may have extra gold to spend on S item types as you simply won’t be able to have SS items for all your slots for quite a while.

Since the game moves you from one area to another without telling you in any way that you forgot to complete a mission, go back and be sure to finish missions with gems. For me, I went back to 7-7 and 6-6 in order to get some free gems once I figured this out.

What Rovio needs to change about the game

Levels are actually a bad thing. Starting birds on a high level and gaining levels on monsters is not good. The higher your level the higher your opponents level and gear. Often times this makes it so you don’t want to even use your birds that have poor gear.

SS items can only be earned from the slot or weekly events. Earning one in a fight on rare occasion would make it a lot of fun. Technically S items are also possible in battle; however, after more than 1,000 fights I still haven’t received one. S items should become more common than they are now and SS items should show up about 1/1000 battles.

Bird Powers are not equal. The fact that red’s power removes all the red panels on the screen gives it a huge advantage. You can save one, match other panels, and then activate it to remove all red panels. Not only is this more helpful than other powers, but since your own bird’s panels give you double, it’s overpowered compared to what other powers can do.

More maps and less time with later maps. As you go from map to map the amount of areas in the map changes. Once you get to 7 or 8 you’ll be itching to get out of there as the higher areas all require more points / boots which are required to complete it. I’m currently on 7-8 which requires 280 points / boots to complete. This might take all day! If Rovio’s afraid of players acquiring too many gems, lower the amount of gems per map and increase the amount of maps for a change in scenery.

Battle rankings are only based on total points. Quantity not quality. Technically you could be the worst in the world in this game and still be number one if you have the most fight points. Weight should be given to overall win % and quality of opponents played. Within the top 10,000 Rovio could eliminate the level matching and allow all of the top players to play against each other in order to gain battle rank.

Adding players within the game. Not everyone has a lot of Facebook friends playing this game. If there was an easy way to add a tag from an Angry Birds Community, this would be ideal.

An option to Pay to remove ads. While I don’t plan on paying a lot of money to play the slot, I might play it so I don’t have to watch ads between battles or to receive a battle boost.

Overall, Rovio has given us another fantastic free to play game. While there are elements that would allow you to pay to win, players can ultimately earn the best gear by working towards it. Even though there’s room for improvement, the ranking system is fun and gives you the incentive to play. If you haven’t played, I recommend you try it out!