Aula recently contacted me to review their Aula Wings of Liberty Mechanical Keyboard. As a keyboard junky, I was thrilled at the prospect and had thought about buying a keyboard with Kailh switches in the past just to test it out. After contacting Aula’s rep, I learned that Aula makes their own “Aula” switches in the same city that Kailh mechanical switches are produced. Having peeked my curiosity even further, I accepted the product sample.

The Aula Wings of Liberty Mechanical is one of more than a dozen mechanical keyboards which I’ve seen on the Aula website. In addition, the Chinese manufacturer makes gaming mice, headsets, and mouse pads.

Clearly the market for mechanical keyboards is getting more complicated. Having not tried every Kailh and Aula switch, it’s hard for me to make a full comparison. Are Kailh and Aula trying to copy German manufacturer Cherry MX? Definitely, and from what I’ve seen they’ve done a good job of it. Are the switches identical? In my opinion, no. That being said some may like some of the differences between the various Chinese-manufactured mechanical switches.

How’s the quality? Even mainstream gaming manufacturer Razer is using a green switch designed by Kailh in their BlackWidow design. Anandtech does a good job of explaining exactly what Razer’s Orange and Green Kailh switches do, but this still leaves us with only so much information. No one can blame Razer for trying to use Kailh as a source for mechanical switches as German manufacturer Cherry often is unable to cover the demand for mechanical switches.

From what I’ve seen Razer’s new green Kailh switches feel very similar to MX blues. My guess, is that Razer made sure of this before hopping on the bandwagon. Despite changing to what is certainly a cheaper switch the Razer Blackwidow still retails for around $119. For other so-called clone switches, this spreadsheet does a good job with comparing them.

How does this compare to Aula’s switches? Hopefully, as I run the Wings of Liberty Mechanical keyboard through the hoops, I’ll be able to provide some insight. 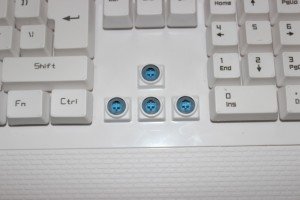 For just under $50 the Aula Wings of Liberty Mechanical Keyboard offers the average gamer a mechanical key experience at a fraction of the cost of Cherry’s MX Blue keys. The keyboard includes no frills like a volume nob or extra G-keys. Certainly this was done to keep the cost down as much as possible. It’s simple and even includes a large-sized enter button like keyboards of old.

The switches themselves are covered with a silicone anti-spill gel membrane on every switch for dust and water resistance.

Speaking of keyboards of old, this one may remind you of the typing experience you once had on an old classic IBM mechanical keyboard. It does feel and even look a little bit like that. Aula uses a reinforced metal plate on the back which makes the keyboard fairly heavy at around 2.6 pounds. As for color the white looks good on some desks and horrible on others so be sure to keep that in mind before pulling the trigger. Of course, Aula does have keyboards that come in other colors.

As for color, the white looks good on some desks and horrible on others so be sure to keep that in mind before pulling the trigger. Of course, Aula does have other mechanical keyboard options. 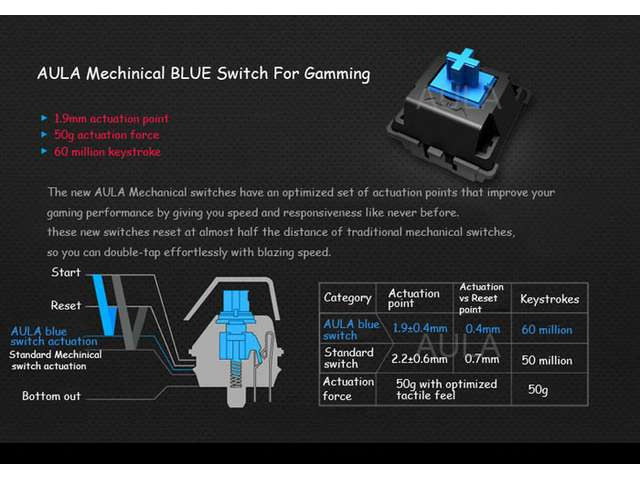 As for typing, I can say that overall it wasn’t bad. Is it as consistent as typing on a keyboard with Cherry MX Blue keys? I’d have to say no. For whatever reason, it felt quite a bit more stiff and the keys didn’t feel as uniform throughout. Tactile feedback felt at least as loud or louder than other MX Blues I’ve used. You can see it compared to the MX Browns in my video.

For lifespan, Aula claims that its switches have a 60 million keystroke lifespan or 10M more than the MX Blue competitor. So far, I haven’t see this verified by an outside source.