So you’re ready to get that Skylake or Kaby Lake processor but aren’t sure what motherboard to purchase. This is the list you’re looking for. Below, you’ll find our list of Z170 motherboards ranked in order of quality, price, and features. We update this list as new 1151 boards are released or price points are adjusted.

While this certainly isn’t a checklist for everything new with the 1151 platform, it is a good summary of essential parts. Keep in mind that Z170 and Z270 motherboards don’t work with Intel’s Coffee Lake. Z370 motherboards are also here for those looking for a Coffee Lake option.

DDR4 Memory: DDR4 is the new standard for 1151 motherboards. It’s more energy efficient, achieves higher MT/s, and has a higher capacity per stick of 16GB vs the previous DDR3 standard. Overall the performance benefits of DDR4 are minimal at this time but may make a bigger difference as manufacturers tighten timings.

Those who want to skip DDR4 on the 1151 platform can certainly do so by purchasing a budget DDR3 Skylake motherboard.

For purchasing information, here are my thoughts on the best DDR4 RAM and Memory for the money. While it won’t be new for those coming from the X99 socket 2011 motherboards, DDR4 memory is still rather new for the mainstream consumer line of motherboards.

The Skylake 1151 platform introduces 6 new chipsets including the H110, B150, Q150, H170, A170, and Z170. It’s compatible with Skylake as well as Kaby Lake Intel processors. While Wikipedia does a good job of showing some of the main differences between the compatibility of these chipsets, here are some key points worth looking at. The Kaby Lake 1151 platform includes the B250, Q250, H270, Q270, and Z270 chipsets. Below you’ll find a list of our favorite Skylake boards. Go here for our list of the top Z270 Kaby Lake Motherboards.

DDR3 and DDR4 Support: Some LGA 1151 motherboards support DDR3 while others support DDR4. Unidimm support never really took off. DDR4 support beyond 2133MHz is only found on Z170 motherboards.

Additional USB 3.0 Ports: With the Z170 chipset 10 / 14 USB ports may be USB 3.0 depending on what manufacturers take advantage of.

Alpine Ridge Controller: With 4 PCIe lanes the Alpine Ridge controller offers support for USB 3.1, Thunderbolt, DisplayPort and is found on only some 1151 motherboards. Expect to pay a small premium for boards that offer these options.

Other Thoughts: A Z97 system may ultimately provide more frames for gamers if they’re able to find a cheap and good Z97 board on rebate and go with the less expensive Haswell CPU options. That being said, most will still prefer to go with the newer platform.

While we have yet to have a look at how all the 1151 motherboards compare when it comes to overclocking, here are a few boards that have been reviewed and seem to be a good value. Too much money? Also, be sure to check out our list of the best budget motherboards from $50 to $150.

Good Z170 Motherboards Under or Around Budgets of $200

I’ve been impressed with Asus’ mid-range Maximus HERO Board entry ever since its Hero VI launch for Haswell’s Z87 chipset. The Maximus HERO VIII looks to build upon that.

Since its release, this board has received the TweakTown Best Overclocking Award as well as Guru3d’s recommendation. While I’ll admit that overclocking at this price level is fairly similar across brands, it’s features like 5-way optimization, 2nd generation T-Topology, and SupremeFX 2015 audio that really set this board apart.

One rather unique part of the audio is that this time around it includes an ESS ES9023P DAC that can power headsets from 32-600 ohms for optimal sound quality. This should give gamers the volume and environment they’re looking for. For networking, the Hero VIII uses Gamefirst III. This technology prioritizes game-related packets in order to eliminate laggy gameplay. 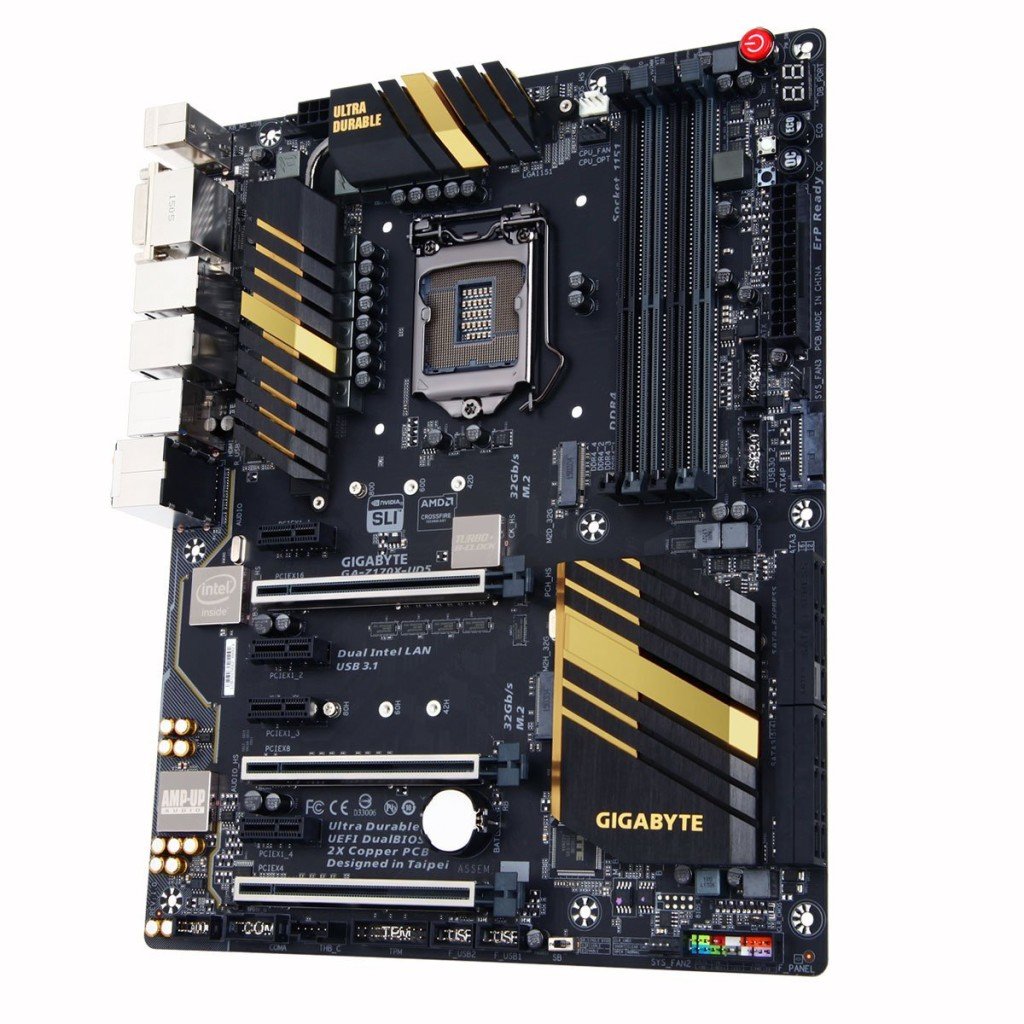 The Gigabyte GA-Z170X-UD5 is a motherboard we recently added to this list because of its many connectivity options for the price. If you’re looking for a configuration that gives you more than what the standard Intel configuration gives, this might just be the board you’re looking for. They’ve added a second NIC and two more SATA ports.

In addition to its plethora of connectivity options, Gigabyte uses All Direct Intel USB 3.0/3.1. The choices they’ve made here are very workstation friendly. That being said the board also comes with plenty of overclocking features like a POST code display and voltage read points along with other standard features. Of course, you also have your standard overclocking button if you’d prefer not to do your own tweaking.

Now that this board has been out for a while we’re giving it a thumbs up as it simply gives you more features for a reasonable price of around $189. If you want a well-built board from a manufacturer that didn’t skimp on the quality simply to add numbers, go with the Gigabyte GA-Z170X-UD5.

Also, consider the Gigabyte GA-Z170X Gaming 7 as a recent entry to the under $200 price point category. It’s regularly in that price range and often goes lower with rebates.

MSI’s recent releases in both the GPU and motherboard world have impressed me greatly. Their $200 release into the Z170 market and Hero VIII competitor is their M7 Gaming motherboard. It recently received an Editor’s Choice award from TechPowerUp and shines with its compatibility and competitive pricing. Highlights include USB 3.1, Twin Turbo M.2, and Dual SATA Express compatibility as well as automated overclocking with the Game Boost Dial and one Killer E2400 Gigabit jack. Overall it’s worth a look in the $200 to $230 price range. Look for additional features in the table below.

Another entry to consider in the highly competitive $200 Z170 market is the ASRock Fatal1ty. Other than its amazing aesthetics ASRock’s focus on graphics is what sets this board apart. The motherboard itself allows for two triple slotted GPUs in either SLI or CrossfireX.

If you’re looking for a less expensive mid-range board that still has a lot of features of the $200 plus boards, the Asus Z170-A is a good place to start. Even overclockers will find that Asus’ $150 to $165 entry is more than enough for most builder’s needs. Most builders will gravitate towards this sort of board vs. some of the premium boards listed above and for the average overclocker, I can’t blame them.

While it’s not new I felt like this list needed to be updated with the Gigabyte GA-Z170X-Gaming 3 which is probably the bestselling Z170 motherboard in the under $150 category right now.  It supports M.2 and SATA Express while still maintaining a price that’s affordable for the mid to entry-level PC builder.

In addition, the color scheme works with a lot of builds out there. It’s definitely one you should be looking at in this price point.

Overall this motherboard gives you 95% of what many boards twice its price do in terms of performance. Most people wouldn’t even notice the difference.

My choice at this price range would ultimately be between the PC mate (shown above) and the Gigabyte GA-Z170 HD3. Gigabyte’s boards in this price range have been a favorite of mine for several generations. Good quality, lots of features, and a decent ability to overclock. This board is no different.

If there’s one con to this board vs. the PC mate, it’s that the PC Mate has support for USB 3.1 and more PCI Express slots at a price point of only $5 more than the HD3. On the other hand, the HD3 has more SATA 6GB/s and SATA Express connectors.  Overall, you’ll have to decide which brand you trust more and which features mean more to you. Want something smaller? Here’s a look at our favorite Z170 and Z70 Mini-ITX Motherboards.