Today, I’ll be walking you through some of the best run & gun filming gear for all you would-be filmmakers and aspiring YouTubers out there. This gear list will have everything you need to shoot and edit your movies, vlogs or event coverage.

Keep in mind that we’re using the word affordable lightly. Compared to other gear on the market it is affordable. However, it admittedly will be out of the price range for some. For those of you who don’t have enough money to afford all of this I offer the following suggestion. Afford what you can. Start with what you have. Casey Neistat, a highly successful YouTuber, has proved in the past that with shaky video and decent audio you can still captivate an audience. Story trumps video quality. Audio, on the other hand, is something you’ll want to get squared away from the start.

What is a Run and Gun Setup?

We’ve already reviewed some beginning YouTuber equipment here. So, if you’re just getting started and want to sit at a desk, on your bed, or stand up against a wall this may be a more practical setup. However, run and gun is characterized by going from location to location. In these situations, you’ll need to be able to get your lighting and equipment setup quickly. So, if you’re planning to be a YouTuber who is out and about quite a bit, here’s what I’d recommend in 2018. 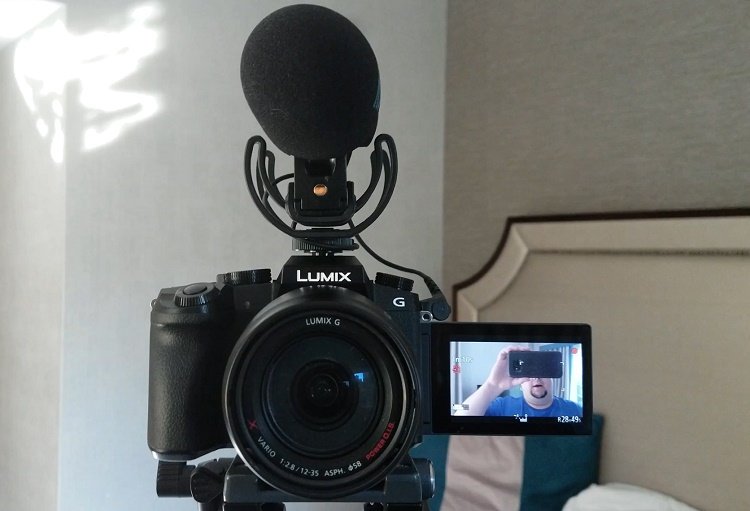 Hands down the best 4K camera under $1000 right now is the Panasonic G7. Not only does it come in at a cool $599, but it has loads of features to make shooting video even easier. In addition to doing 4K, it’s also capable of full HD 1080p 60 FPS.

Two features that stand out on the Panasonic Lumix G7 are the focus peaking and histogram. With focus peaking, you’ll always know what’s in focus and what isn’t when you’re shooting manually. I used to primarily use autofocus, but with focus peaking its honestly easier. And you can still lock on to your subject by dragging a box over them with the on-screen display. Once focused which happens instantly, you get blue lines over your subject so if you’re moving around a lot or they are, its easier to keep track of them.

The second feature I’ll point out is the luminosity histogram to ensure you’re always getting the best light into the camera to make your job easier in post-production. There’s nothing worse than capturing something only to find out afterward in post that parts of the shot are too blown out or the blacks are completely crushed leaving portions of what you shot unusable.

The only shortfall of the Panasonic G7 I can think of is that it uses a micro four-thirds sensor. The reason this is not great is that it limits the light getting into your lens by half when compared to a full-frame sensor. When shooting video that’s a very big deal because of the restrictions we filmmakers run into with shutter speed and obeying the 180° rule. The reduced amount of light getting in also affects depth of field or bokeh you can achieve. All in all though this is not enough to deter me as I’ve shot in some pretty dark places and still been ok since the G7 can shoot even at 3200 ISO and still get a really clean image.

Hands down one of the best lenses you can grab to work directly with the Panasonic G7 is the Lumix 12-35 f/2.8. The main reason being is that’s its a native lens to Panasonic and it can focus damn near instantly. On top of that, it features a great range of 12-35mm which compared to a full frame would be 24-70mm so you got something wide enough to hold at arms length, but also enough zoom to not be right on top of your subject if need be. Last but not least the low aperture of 2.8 will allow you to get a lot of light into the lens which is super important when dealing with a micro four-thirds sensor.

For these reasons the Lumix 12-35mm is your one stop shop for pretty much every shot, you’ll need to pull off without ever having to reach into your camera bag for another one. There are less expensive options out there like the G Vario 14-42mm which you can purchase in combo for cheap with the camera itself; however, this is my preference right now. 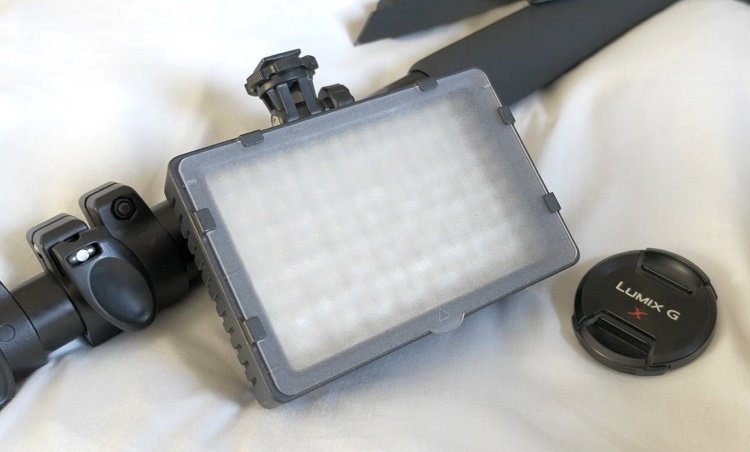 There are a lot of more expensive options than the Neewer CN-216 that can help cut down on the weight, but its hard to justify the cost of those when the Neewer does such an amazing job at just $40. You can affix the LED light to the top of pretty much any DSLR or mirrorless camera as long as it has a hot shoe mount on top.

It has 216 LED’s built into the unit that are powered by six AA batteries and you can easily dim or brighten them with a dial on the side of the unit. The six batteries do add a decent bit of weight to your setup, but if you’re covering an event or convention that doesn’t have the best lighting then you’ll be really glad you brought it along in your camera bag. 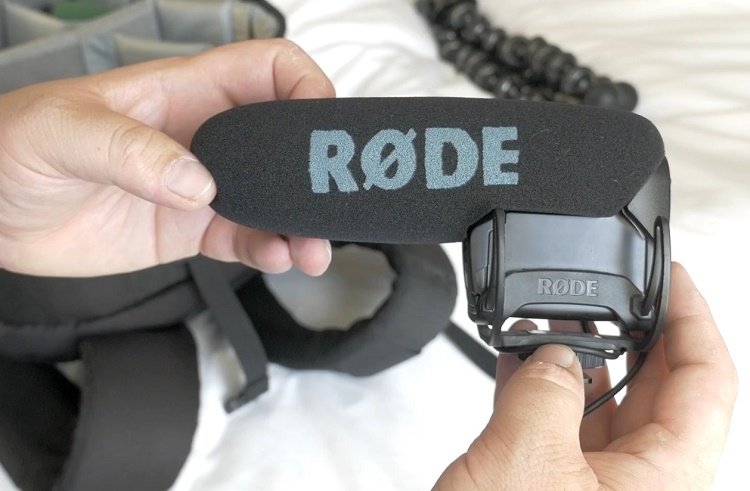 As a Youtuber myself in the tech industry I do a decent mix of vlogging when traveling to conventions as well as interviewing people for the companies I work with.

For a great vlogging microphone, I would go with something that mounts directly onto your camera like the Rode Videomic Pro. You can pick one of these up with a built on shock mount which is great at removing any rumbles when the camera is shaking around.

The Rode mic has three different recording modes; a default one and one with -10db and +20db. If you’re filming in a noisy environment then the -10db is the best setting and one that I use pretty much all the time since the camera is usually at an arm’s length away with the Rode mic attached on top via the hot shoe. Lastly, it uses its own battery solution so you don’t have to worry about it draining your camera battery at all. 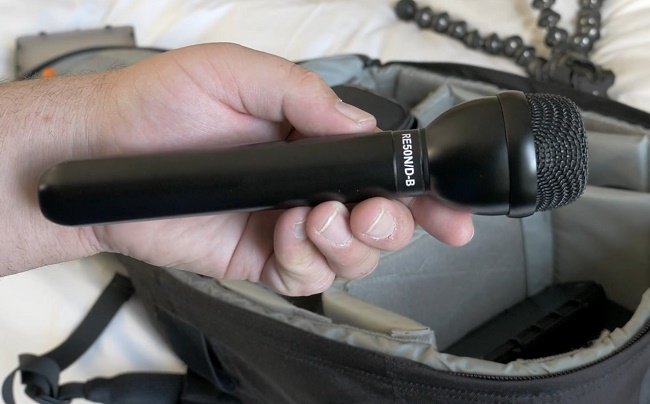 For interviewing purposes I rely on the Electrovoice RE50N/D-B which is an industry standard for many professionals out there including some of the big news stations on television and with good reason. It has a solid steel construction that makes it very durable and the fact that it is a dynamic microphone means it won’t pick up a ton of background noise so the audio you’re primarily hearing is the voices of you or your subject being interviewed.

Now since the Electrovoice uses an XLR output you will need an adapter cable to record directly into your camera if you don’t have a dedicated solution with XLR. I use a cheap 6-foot cable that is very affordable and does an excellent job recording right into my Panasonic G7. 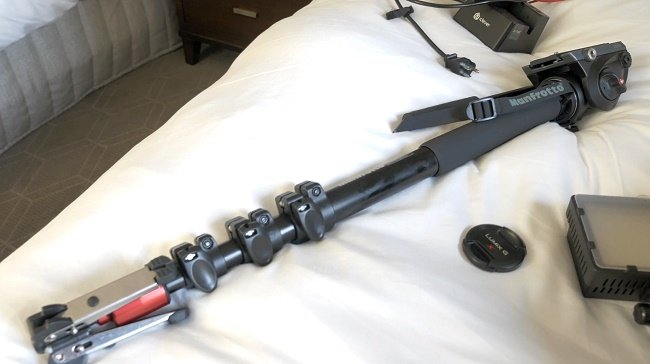 When I’m traveling I always bring two tripods with me. Actually, one isn’t a tripod exactly, its the video monopod from Manfrotto with a fluid base. The one I’m using also comes with a great fluid head that I use back at home in the studio on an actual tripod, but having it in the field gives you a couple options for getting fluid pans. You can either move the head or the actual monopod itself that has a 3-legged base with a small footprint.

The 3-small legs at the bottom are greatly appreciated to help stabilize shots and are even capable of keeping the monopod upright as long as you have a flat surface to put it on. Be weary of leaving it on carpet or other uneven surfaces though as it can fall over on those somewhat easily.

The other tripod I always bring with me is the Joby Gorillapod with ball head. I primarily use this for vlogging or if I need to shoot anything hand-held quickly. You may remember this from our how-to vlog like Casey Neistat article as it’s his choice for everyday use on his vlogs. The ball head helps out if you ever want to set the tripod down so you can ensure the shots are level. 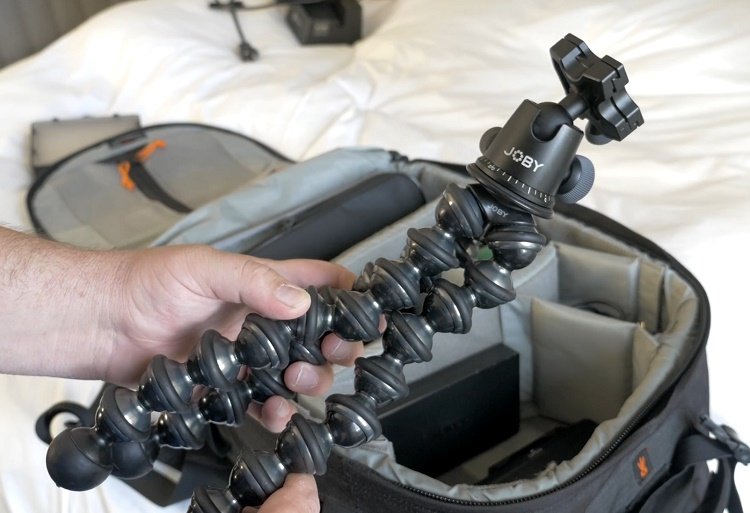 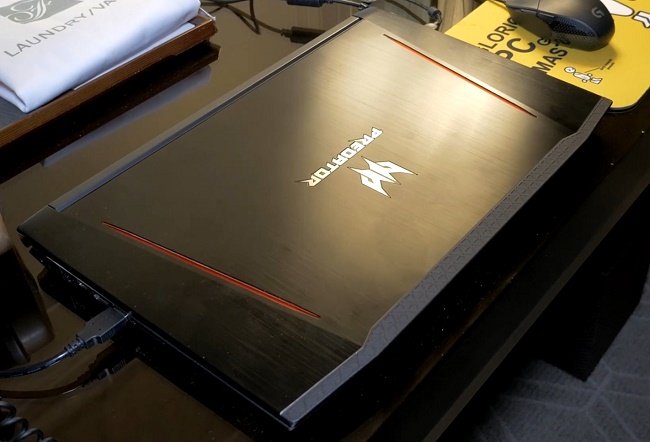 I recently received the Acer Predator Helios 300 for editing videos and it has quickly become my favorite one to date. In the past I’ve edited on big and bulky gaming laptops, but the Helios 300 comes in at just under six pounds which is not bad at all for a fully equipped gaming laptop with an i7 processor, 16GB RAM and a GTX 1060.

I was able to process 4K video with ease on the i7 of this laptop with 10-minute 4k videos with multiple layers taking around 40 minutes to render. That’s honestly not bad at all when you consider how brutal 4k can be on your processor. Since I use Sony Vegas I was also able to leverage the GTX 1060 to assist with video encoding so that likely help cut down render time by at least a few minutes. Not only that, but I was able to play some of my favorite modern games at ultra 1080p from the hotel.

I hope you found this article informative if you need gear for when you’re shooting video away from the studio. It took me a lot of trial and error to get to where I am today and I think I found the perfect balance of gear for my needs and hopefully it works for you as well.