Nvidia’s G-Sync technology was announced late in 2013 as the answer to many a PC Gamer’s prayers for a solution to a dilemma that has plagued us ever since moving on from CRT monitor’s in favor of higher resolution LCD and LED displays. Since then we’ve been forced to choose v-sync to cap our framerate to match the refresh rate of our monitors which would incur input lag and the possibility of stuttering when our framerates would drop. Many competitive gamers had chosen to simply run v-sync off and having no framerate limits, but then we would see some pretty bad tearing when a game was running at frame rates over the monitor’s native refresh rate.

That brings us to today where G-Sync is just now starting to become a common technology implemented in new displays. By my count, there are currently 8 G-Sync displays on the market, but we will be focusing on the two 2560×1440 offerings from Asus and Acer. If you are more interested in FreeSync displays, this site recently had an article discussing some of the best FreeSync panels available.

The ROG Swift was released last year to much excitement as not only one of the first few G-Sync monitors available for purchase, but also because it is 1440p and capable of a native 144hz refresh rate. Before the Swift hit store shelves, many gamers had resorted to purchasing overclocked Korean 1440p panels to get the high refresh rate they were looking for. Pair that with a super slim bezel, matte finish and beautiful gamer aesthetic. It was quickly apparent that Asus had a real winner on its hands.

Shortly after its release, there were many customer complaints in regards to the quality control at Asus with the Swift. Dead pixels and backlight bleeding were a common complaint with many consumers upon receiving their displays. I personally received two bad ROG Swift’s before ultimately returning it to get a full refund. I would have certainly taken my chances a third time if it hadn’t been for the TN panel with a rather aggressive AG coating that Asus had utilized. The TN panel that Asus had employed left a lot to be desired in terms of color reproductions and viewing angles.

The Swift definitely has some striking specs on paper and it manages to execute them well for the most part. 144hz, G-Sync, 1440p and 1ms response time are a huge driving factor behind this monitor and if you are a competitive gamer looking to do 1440p gaming then it’s hard not to recommend. However, if you’re concerned with desktop experience and not looking strictly for a gaming display then the second monitor we are looking at may be more your speed.

The Acer XB270HU is making big waves right now in the monitor scene. Much in the way that Asus did with implementing a 144hz 1440p display; Acer is now doing that with the first ever 144hz IPS panel that is available outside of overclocked Korean panels.

One of the biggest issues that had kept IPS displays from being adopted as gaming monitors were the slower response times that resulted in some pretty severe ghosting. Not the kind of thing that a gamer looking to plop down $800 on a monitor is looking to deal with. Thankfully Acer managed to trim down the response time to an acceptable 4ms.

Having used this monitor for gaming and desktop work for over a month now, I’ve not noticed any perceivable ghosting while gaming. It is only when running Blur Busters ghosting test side by side with a 1ms panel that I could see a difference and even then it was very minimal. It’s a sacrifice I would be willing to make for the superior colors and viewing angles of an IPS display. 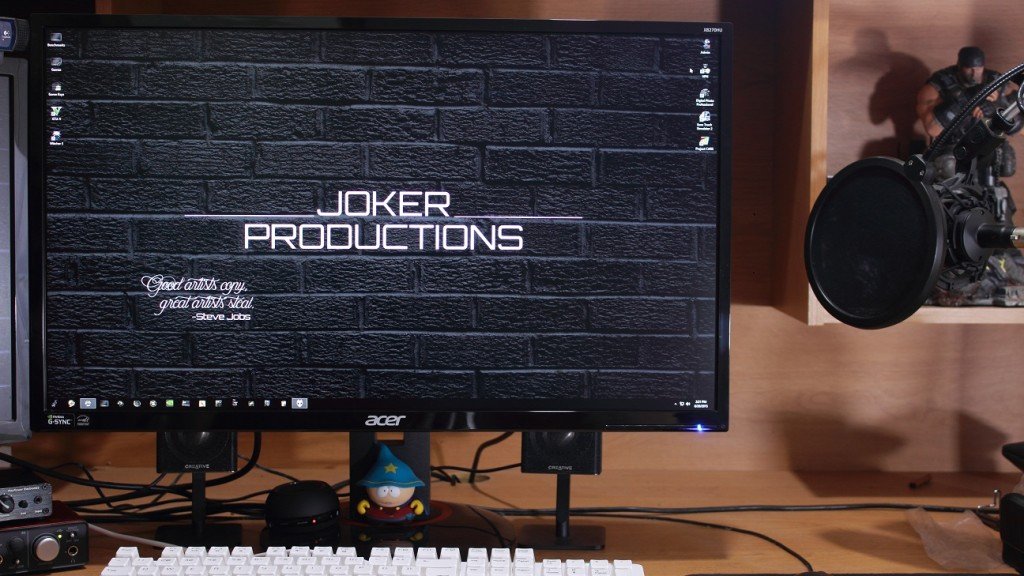 The biggest drawback of the Acer is the aesthetic. This is one area that the Swift had excelled in, but unfortunately, Acer went with a glossy finish and what some would argue as a rather cheap stand that I would expect to see on a $200 1080p display and not an $800 G-Sync capable monitor.

The glossy finish even extends to the interior of the not so slim bezel and creates reflections of what is being displayed at the edge of the screen. Taskbar icons, system clock and active browser tabs are the most noticeable especially when they are light colors.

The Acer has also been met with some quality control issues early in its release cycle. Many consumers have reported on Amazon and Newegg of receiving display with dead pixels and having to return them, although they don’t seem to be as frequent as the ROG Swift. We will have to see if this issue persists later in the XB270HU’s release or if Acer will get the problem under control and start shipping working displays more consistently.

There is one more 1440p G-Sync monitor that is worth noting. The Asus PG2749Q is set to come out later this year. It’s a particularly exciting display because it will essentially be an IPS version of the ROG Swift. Combining the amazing colors and viewing angles that are present with the Acer XB270HU and putting that into the stand and bezel of the Swift may be too much for enthusiast level gamers to pass up. I know I will be anticipating its inevitable release and hoping that Asus can iron out some of its shoddy quality control.

Between these two monitors, they both have their positives and negatives. The ROG Swift is a sexy looking monitor with a blazing fast response time, but suffers from those poor viewing angles and colors. On the other hand, the Acer XB270HU is doing everything right on the display side at the small cost of having a slightly slower response time and unwelcoming aesthetic. That being said; I would take the better display every time because I am going to spend a lot more time looking at the screen then I am at the stand which is why the Acer XB270HU is still sitting on my desk today.

Right now there isn’t a whole lot of choice for gamer’s and PC enthusiasts looking to pick up a 1440p G-Sync display. Hopefully, that will change soon though as the monitor market is moving faster than ever before. New displays are coming on the scene almost every few weeks so if you aren’t sure about either one of these displays then your best course of action may be to just wait and see what develops in the coming months.

If you’re looking for the best GPU solution to run either of these 1440p displays then be sure to check out my article on the best 1440p graphics cards available right now.