Spending a fortune on a tablet just to have your child scratch or break it is an experience my wife and I would like to avoid repeating. Unfortunately, it’s already happened twice.

Despite these accidents, we wanted them to have a tablet. The allure of OverDrive, a free app that allows you to borrow e-books, along with free educational apps was too great to overlook. For that reason, we decided this year that we’d get each of them their own kid-friendly tablet.

To avoid losing a lot of money in the case of “accidental tablet destruction”, we decided to go with something not only kid-friendly, but cheap. And while the old phrase “you get what you pay for” commonly comes to mind whenever I make a cheap purchasing decision, tablets were an area where “expensive” simply hadn’t worked out in the past.

In my search for the ultimate cheap and kid-friendly tablet, I went through 15 popular kid’s models. I began by wanting something fast enough to work smoothly on modern apps with kid-friendly parental controls. I ended up realizing that a decent screen and a Micro SD Card for expansion were just as important.

In addition, I found a whole lot of junk out there. Many out-of-date tablets are still selling for the same price as tablets with updated hardware and software. With that in mind, here are a few current tablets that I’d recommend.

Before discussing the pros and cons of the Kindle Fire, it’s important to realize that when you buy a Kindle you’re truly buying into the Amazon App Store and Silk Browser. In other words, the Kindle Fire doesn’t come with the Google Play Store. There are ways around this, including easy ways to install the Play Store on a Kindle, but for those of you who aren’t tech-savvy or prefer not to deal with it, you’ll want to know what you are getting into.

In 2015, Amazon released the $49.99 Kindle Fire 7″ and 7″ Kids Version for $99.99. While the specs are the same, there are a few differences between the two. The Kids Version comes with a tablet cover, a two-year worry-free guarantee, and a year’s worth of Amazon FreeTime Unlimited. The cover will set you back around $20 if you purchase it separately and the two-year worry-free guarantee is everything it sounds like. If your kid breaks the tablet, Amazon will replace it.

FreeTime Unlimited is a subscription service that offers 10,000 age-appropriate content titles for kids ages three to ten that can be used with up to four children.

As you can see the various monthly fees associated with FreeTime Unlimited change based on whether or not you have prime and with how many children and tablets you’re using it on. If you’re not sure whether you want it or not, there is a free 1-month trial associated with it.

Ultimately, you don’t have to feel obligated to go with FreeTime. There are plenty of free apps available through the Amazon App Store as well as Prime-only free apps that regularly come up. This includes OverDrive, the free app which allows you to borrow e-books from libraries. As we were purchasing 4 tablets it would have made sense to go with at least one Kids version of the tablet for the extra value. Unfortunately, in the heat of a Black Friday deal, I missed out.

In terms of performance, you’ll get a lot more out of the Kindle Fire than you will with other tablets on this page at the same price. The speed is plenty for our kids modern apps, the IPS screen looks great, and Amazon even allows for a Micro SD Card with up to 128GB of additional storage. Amazon makes you pay for this by showing Lockscreen ads as well as locking you into their Play Store.

What about Lockscreen Ads?

On your child’s Kindle Fire there are Apps on the lock screen. By this I mean when you wake the Kindle Fire from sleep they’ll show up on that screen until you unlock it. I didn’t find this to be that annoying, but if it is to you, then you have two choices. Pay $15 to remove them or use the method I linked above to add the Play Store in order to remove the ads.

In my opinion, the Kindle Fire is the best cheap kids tablet on the market if you’re willing to work with some of the kinks. You simply get better performance and quality for the same price or less than other tablets. In addition, the parental controls for it are much more intuitive than free Apps available at the Google PlayStore. While I do have a lot of apps which I’ve purchased on the Google Play Store, the pros outweighed the cons for us. 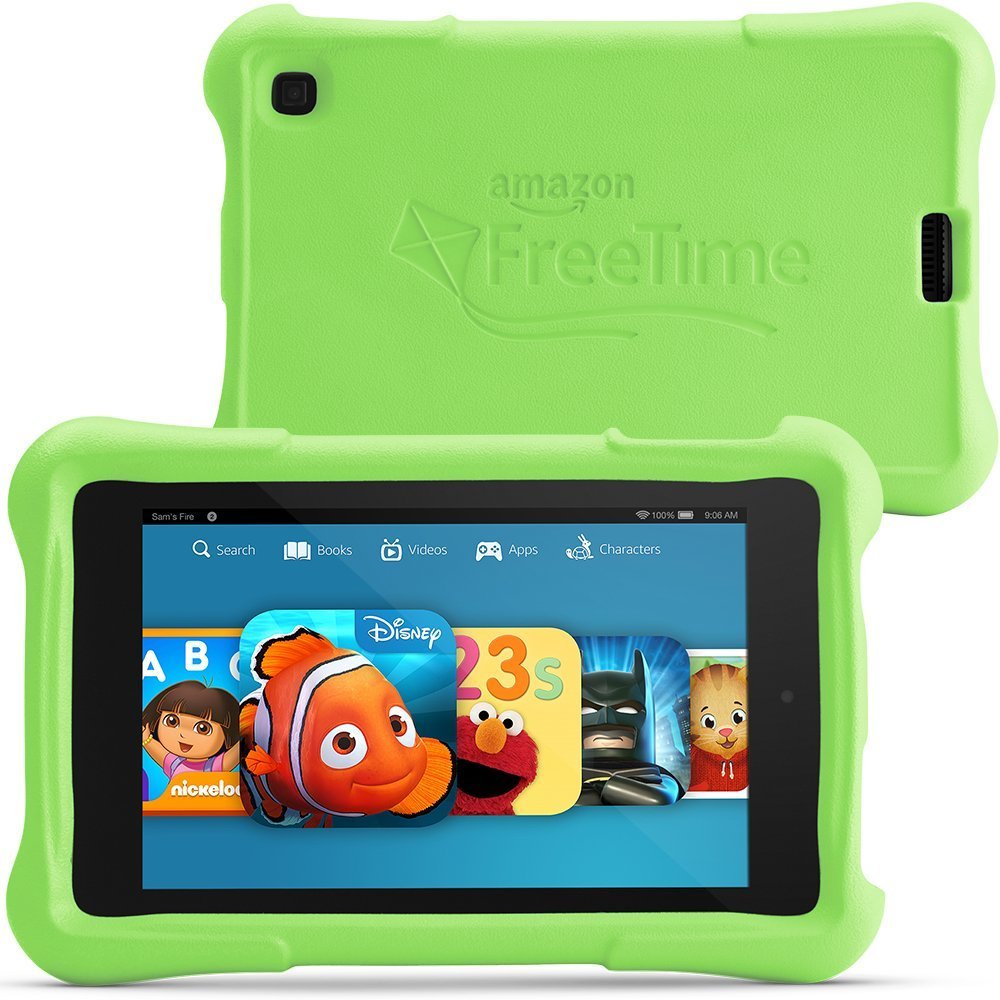 If you’re looking for a Kindle Fire for your kids, you’ve probably come across two similar versions of this tablet. The Kindle Fire HD 6″ is the beefier more modern version of the Fire with a higher IPS screen resolution of 1280 x 800 and a faster 1.5GGHz quad-core processor. It’s a bit more expensive than the Fire 7″ coming in at around $120 for the Kids version and $100 for the standard version.

While we think the kids version makes a lot of sense, the standard version was a bit harder for us to support and especially since the larger, albeit slightly slower, Kindle Fire 7″ is half of the price. What’s more is that the Kindle Fire 7″ offers a Micro SD card while the HD 6″ does not.

Overall, you’ll have to decide whether performance and a better screen resolution warrant the need for the HD 6. For us, it simply did not.

For a cheap and good Android tablet, I like Dragon Touch’s new 7″ IPS tablet. It comes with the Zoodles parental control app and the Android 4.4 operating system. In addition, it comes with a few extras that other tablets in this price range don’t come with like an HDMI slot and Bluetooth compatibility.

The Dragon Touch gives you a lot to like for around $60. The performance is reasonably smooth and the Android OS makes it easy to get loads of cheap or free educational apps. In addition, the display looks better and performs better than previous generations. 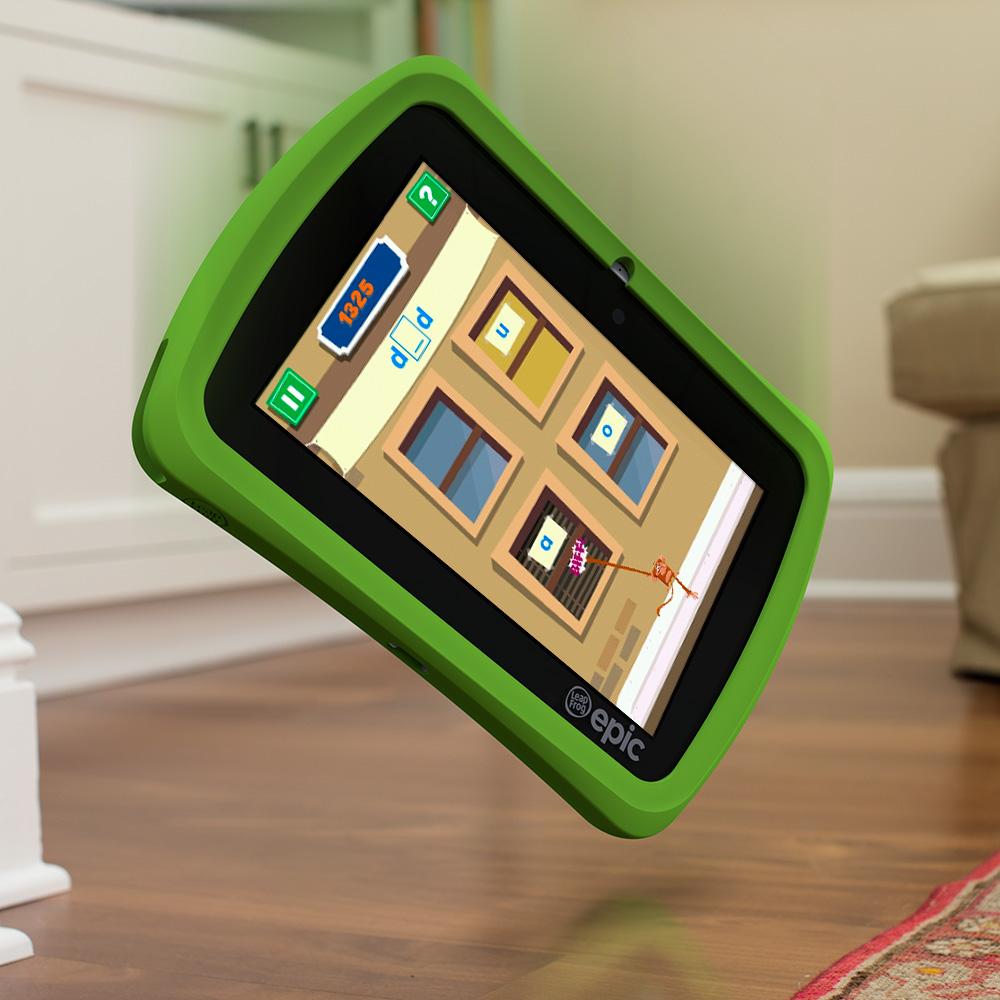 I have a love-hate relationship with the LeapFrog tablets that have come out as of late. The tablets, including the epic, are all good performers. Clearly LeapFrog has integrated Hardware that works well with the software they’ve given. Educational games are all polished and mostly a solid learning experience.

The Epic has a big advantage vs previous generations of LeapFrog devices mainly in that LeapFrog chose to use a version of Android 4.4 rather than its proprietary system. This allows for far more games at reasonable prices than previous devices. Still, you can’t install the PlayStore with the LeapFrog Epic and many of their featured games cost as much as $20. In a world of Free or $1 to $5 apps, this seems rather expensive.

What’s more is that the hardware inside the LeapFrog isn’t exactly that impressive. The TN rather than IPS panel is a downside vs. other apps in the category and the camera offers rather poor quality photos.

The LeapFrog still has a lot going for it. The polished apps, as well as the out of the kid-safe system out of the box, will still hold appeal for many. In addition, the Epic comes with 20+ apps included which means that kids will have something to do right out of the gate. 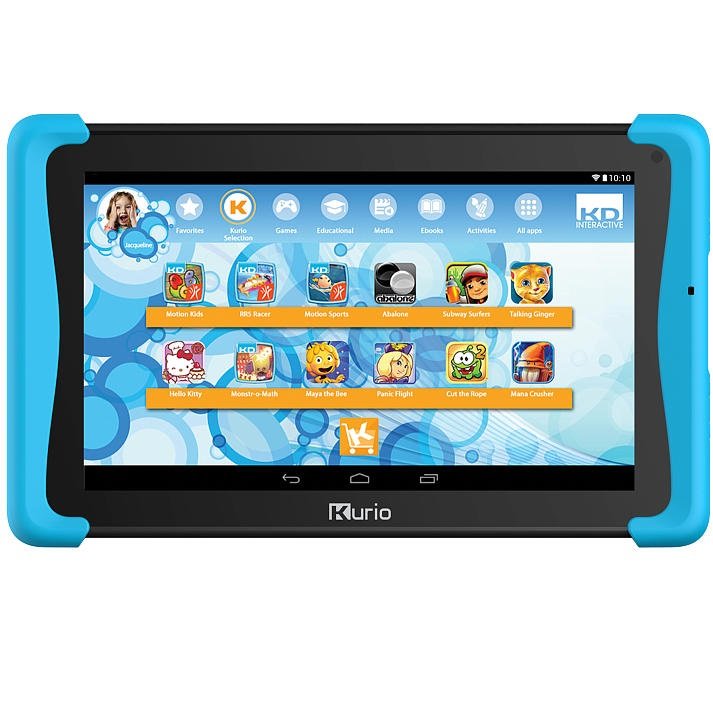 The Kurio Xtreme 2 is a recently released tablet that’s available for as low as $80 on sale at Toys R’ Us or as much as $120 elsewhere. There’s a lot to like about including the Android 5.0 operating system and a quad-core Mediatek MTK8127 processor and dedicated 3D graphics chip. The 16GB memory is higher than other options in its category out of the gate and can be expanded up to 32GB with a microSD card.

The Xtreme 2 also is compatible with Bluetooth 4.0 and has a .3MP front-facing and 2.1MP rear-facing cameras. Connectors include a Micro HDMI and Micro USB port.

The Performance of the Xtreme 2 is good along with the higher capacity storage. Modern hardware makes it fast enough for most modern apps and the 90 pre-loaded games and e-books have a lot to offer out of the box. If there’s one downside to the Xtreme 2 it’s that it doesn’t have an IPS screen.

The cheaper TN panel is probably good enough for most kids but does suffer a little when put side by side with the Kindle Fire. If you can get it for around $80, it’s worth the price. At the full MSRP of around $120, I’d pass on this one.