People are always asking me how I make my videos and what I did to help grow my Youtube channel. A lot of work goes into building a channel and brand on Youtube, but there are definitely certain upgrades you can make along the way to improve the quality of your content.

The main goal with these upgrades is to bring your channel to a more professional level so you can see a return on your investment of time as well as any money spent on equipment for making videos.

Getting started on Youtube is relatively easy once you figure out what your content is going to be and the direction you want to take the channel. The majority of today’s advice is going to concern people who are actually filming themselves or their subject on camera. For those who are out and about a lot or want to film their daily lives, also be sure to read my recent post on the vlogging like Casey Neistat.

When you’re first starting out it’s important to put yourself out there and get comfortable on camera so even if you start out with filming on a smartphone or webcam then that’s okay. It’s all a learning experience and just posting videos and watching them back is going to teach you a lot.

Now that you are ready to make videos let’s jump into the first upgrade I would make to help grow your channel:

The Best YouTube Audio Equipment to Use from Low to High

I have found that audio is probably one of the most overlooked facets of the video production process by many channels just starting out. Speaking from experience, I can tell you that nothing will have an audience abandon you quicker than bad audio. I can put up with watching something that looks like it was filmed on a VHS, but if it sounds like the audio was recorded through a tin can, then I’m not going to watch it unless you have the only video around on a topic that I am absolutely desperate to be informed about.

One of the first upgrades I made to my videos was getting a Blue Snowball microphone. It’s probably one of the most popular microphones out there because it’s affordable at just around $60 and it’s compatible with any Windows or Mac computer. It’s driverless so that means it’s plug and play.

The audio quality is decent as far as USB options go and it offers three different modes; one of which supports omnidirectional recording so if you are recording multiple people or move around a lot when filming then this will be a great option.

I’ve seen many people look at higher end USB microphones as an option that cost over $100, but at that point, you are much better off picking up a nice XLR microphone with an audio mixer. For around $120 you could easily pair up the MXL 770 with the Behringer Xenyx 502, 5-channel mixer. This will allow you to power the microphone and give you more control at the source, resulting in vastly superior audio quality.

With a USB microphone, you’re extremely limited and there isn’t much you can do to color your audio, other than doing it in post, and it’s always better to make adjustments at the source if possible. That is why I advise a mid-range XLR option over a high-end USB option like the Blue Yeti or Audio Technica AT2020 USB version.

On the high-end, your options really start to open up. Large diaphragm and dynamic microphones are a highly contested debate, but for me, it has to be a large diaphragm microphone like my AT2035 by Audio Technica which runs around $150. This includes a shock mount, carrying bag and pop filter. You could definitely find more expensive options out there, but I’ve found that there are diminishing returns with $200+ options unless you are a professional broadcaster and really making a significant amount of money to justify such a purchase.

As far as an audio interface is concerned, I use the Scarlett Solo by Focusrite because it gives a very clean sound and virtually zero distortion. When I need to record audio on the go then I turn to my Zoom H4N which could also be used as a desktop audio interface for your XLR microphone so if you are on a budget and tend to need a more portable option then it could be a good choice for you.

Lighting is crucial to having good looking video. If your subject is not properly lit then the camera is going to have to compensate for that and it will never give as good as a result if you had just used proper lighting techniques.

If you are filming indoors then chances are you won’t have enough natural light to film with good quality. Luckily you can make this upgrade without spending a ton of money.

If you really need a lot of light for shooting product videos for review then a softbox set like the one from Limo Studio might be a better option since each softbox contains a two light holder for additional brightness. This is key for getting all the small details to show up on products you may be filming for your channel.

Beyond the Umbrella – Soft Boxes 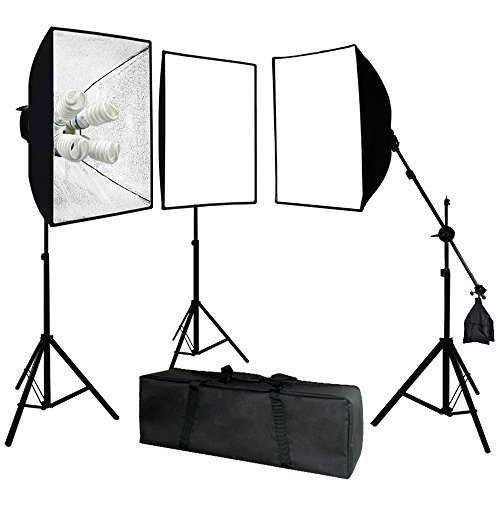 While an umbrella kit is a great option under $50 to get you started; if you have more money to spend initially or are looking for your next lighting upgrade, then a 3-way set of soft boxes from Limostudio is the way to go.

Limostudio offers the best bang for the buck option, including bulbs along with their soft boxes. While the build quality isn’t ideal if you intend to transport them around often, if you plan to use them in a home studio then they will serve excellently at $119.

Chances are your operating system already has a free editing software. Microsoft offers Windows Movie Maker, but it is extremely basic and it will only get you so far. Moving on from there you have quite a few options, but I’ll be focusing on two of those. Sony Vegas is what I first transitioned to when I need a more robust editing software and it is still a great intermediate level software for making your videos.

Eventually, though you may want to move to a more professional utility like Adobe Premiere Pro CC. Premiere is really the best of the best and that’s why many professionals that edit videos for a living choose to use it. It’s a great option to use with this photo editing PC which you can build yourself.

Paired up with other Adobe software like Audition, After Effects and Photoshop; you’re looking at a suite of tools that will help you run your channel and take your videos to greater heights. Thanks to the Creative Cloud, almost anyone should be able to afford one of their packages which start out at $20 a month for one program which you could use for Premiere. If you need color accuracy, you’ll also want to look for a color accurate monitor.

What’s the Best Camera to Use for Recording YouTube Videos in 2018?

Chances are you have been making videos for a little while now and you’re getting comfortable in front of the camera so it’s probably time to make an upgrade to a DSLR or one of the many mirrorless options out there. My weapon of choice in 2017 is the Panasonic Lumix DMC-G7KK.

While last year I would have recommended the Rebel T5i, this year the Lumix DMC-G7KK wins as it does 4k and is a much better camera for video overall. I’d even put it over a Canon 5D Mark 3. The T5i is still great if you’ve got it and takes great stills, but at the same price point, I couldn’t recommend it over the Lumix option.

One more option would be the Sony RX100. It’s a touch more expensive either of these options but it shoots in 4K or 1080p 60fps. Also, since it’s a mirrorless camera, it is going to much more lightweight and portable. If you plan to do a lot of vlogs on the go or you just never know where or when you might be filming, the RX100 from Sony is excellent. It’s also fairly rugged so you can feel confident having it in a bag so it’s ready to go at a moments notice.

This last one really can be a freebie. Just take into account where you film your videos and think of it as your set. You wouldn’t see Sportscenter filmed in a laundry room or some messy place to consider what your audience will be looking at behind you. Try to find something that looks nice and is maybe relatable to the content you’re producing. If you talk about games, then maybe you can film in front of your gaming setup or shelves with game collectibles. You can also try my run and gun setup if you’re out and about a lot.

The possibilities are endless so use your imagination and make good use of what you have around you. If all else fails, pick up a green screen for relatively cheap and make your background whatever you want it to be.

I hope you enjoyed the 5 tips to help improve your Youtube channel. If you found this article helpful then please do let us know by leaving a comment down below and be sure to use our links to any of the products discussed here in this article.