Today we’re taking a look at a Ryzen 5 build we’re calling Gladiator. It’s 100% game ready and features high value parts. First we’ll focus on the build itself and then follow up with a full round of benchmarks for both gaming and productivity. For benchmarks, we’ve taken this system through its paces and compared its performance to the Intel i7-7700K which costs around $100 more.

That being said $100 is just the start of it as this build comes in at under $1100, not including the RGB fans and custom cables. Right now Intel has nothing to compete with that in the productivity work space, in terms of value, for their X99 parts.

Corsair provided out the bulk of the parts for this particular build, including the cooler I’ve got on the Ryzen 1600, the Corsair H60. It’s certainly doing the job here and is perfect for cooling the 1600 which is one of the lower TDP variants from AMD, only pulling 65 watts. I’ve tested other non-X variants of Ryzen with the 65 watt TDP and even the Wraith Max was more than sufficient for cooling these processors. So the H60 is really all you need in terms of an AIO.

I ran Aida64 for over an hour and the 1600 leveled off at 60 degrees celsius with just a single 120mm fan on the radiator, configured to pull air out of the rear of the chassis.

I would also like to add just how easy it was to install the H60 for Ryzen. I’ve dealt with a few other all in one coolers recently for Ryzen and their mounting hardware felt like an afterthought on the AMD side. With the H60 it was so simple and enjoyable to work with. The metal bracket slides over the top of the pump and is magnetic. So, it holds it in place while you attach the screws that latch onto the stock motherboard hardware. I really wish other AIO manufacturer’s would take a cue from Corsair when making mounting hardware for AMD processors.

For the memory in here, I’ve got some white dimms in the form of the Corsair Vengeance LPX 16GB kit, which easily hit 2933MHz on the stock XMP profile. I received a black kit of the same exact RAM with my Ryzen processors at launch and since then they’ve been the most stable RAM I’ve paired with Ryzen. Other kits from Geil and G.Skill have had issues in my personal testing that have yet to be ironed out. However, the LPX kits have been super stable right out of the box using default XMP profiles. 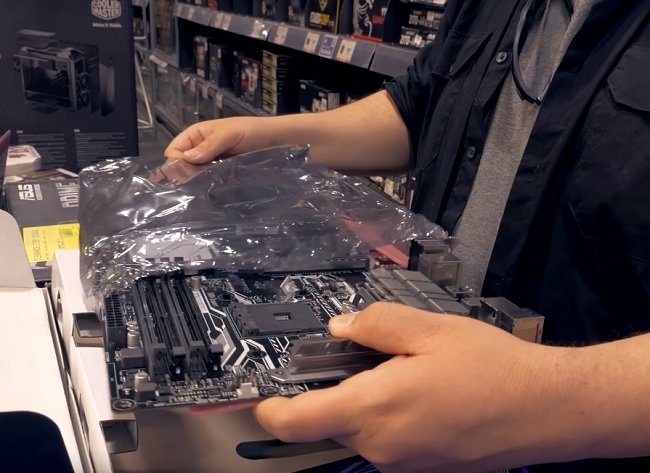 The motherboard in here is the Asus Prime X370 that I picked up the other day at Microcenter on an open box deal and it has worked flawlessly for me. I made sure to update to the latest BIOS from the Asus website and have yet to have a single crash outside of when I was dialing in my overclock. I paid only $105 for this board, but brand new its listed at $150. So it’s definitely one of the more affordable X370 boards out there and doesn’t seem to skimp in its feature set. I’ve been happy with it thus far.

For the graphics, I ended up using my GTX 1060 Founder’s Edition after a poll on Twitter for which GPU I should use in here. I honestly would have rather made this an all AMD system, but I’m still waiting to hear back on RX 570 & 580 samples. Also, to be perfectly honest, this graphics card will likely change very frequently as I test cards on the Ryzen 1600 so you can think of the 1060 as a placeholder. 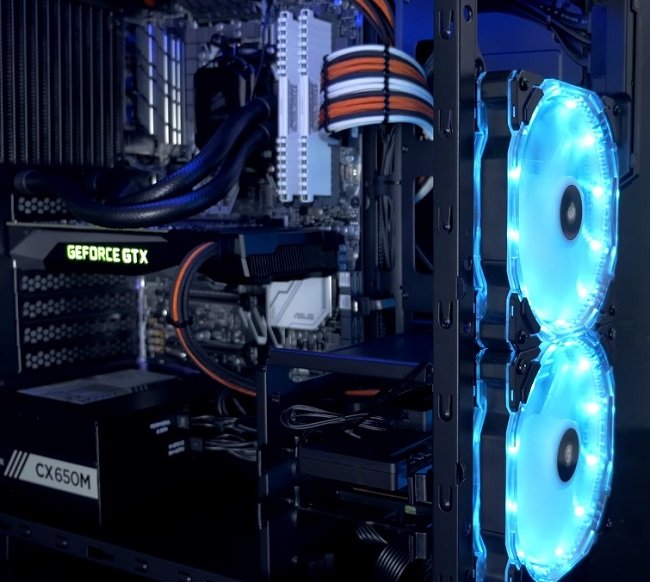 All the parts here are inside the new Corsair Spec 04 which is a very reasonably priced case at just $50. It’s not feature rich and it saves on some areas like grommets for the cable cutouts as well as not having a PSU cover, but compared to what else is out there on the market at this price point, it’s doing really well in my opinion. Building in here was fairly straightforward and I didn’t encounter any issues in the build process.

It did however only include a single fan at the front that I replaced with Corsair’s HD140mm RGB fans and connected to the new Commander Pro for controlling the lighting and fans in the Link software. It was a bit of a mess initially getting everything in here with a control module and lighting hub, but thanks to some crafty cable management and utilizing the hard drive cages, I was able to keep everything nice and tidy at the end of the day at least on the front side which is visible while on the backside, that was a different story.

You get a lot of control with the Commander Pro, but I just wish it could be done with less of a cable mess. I guess that’s just the cost of having a set of software controls at your fingertips for RGB lighting if that’s something you need. Unfortunately I had a lot of issues getting my lights to work properly as only the default rainbow effect seemed to work properly. Setting lights to a static profile would work on one fan and not the other or disable all lighting entirely. Being that the commander pro is a new piece of hardware from Corsair, I hope these issues can get ironed out with a few software updates.

Speaking of crafty cable management, the custom cables I have in here were provided by Wazz Mods who does an amazing job and gets orders out super fast. I had been sitting on these cables for a couple months waiting for a build to use them in and I’m glad I finally did as the white accents of the mobo and RAM really work well with this color scheme in my opinion. 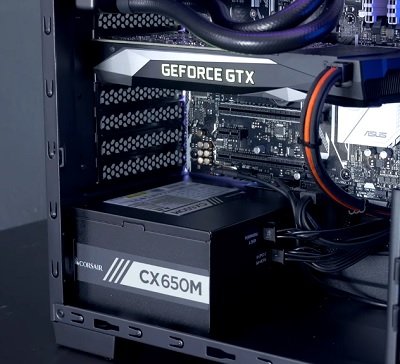 For the PSU I’ve got the CX650M which is more than enough juice to power Ryzen and any accompanying GPU I may want to throw in here. It’s a semi-modular PSU so the cables from Wazz were extensions. However, everything fit on the backside of the Spec 04 fine as the door has large bulge in the center to allow you some lee way in terms of how you fit all your cables in there.

Lastly for the storage I have a Corsair LE 480GB SSD for the boot drive and important programs. Being as I want this system ready for handling tasks like video editing for testing, then I think an SSD is essential. I’ll end up throwing in an additional 1TB SSD for my game storage, but for anyone out there trying to build this system then you would be perfectly fine with a mechanical drive like an HGST 2TB.

So, for $1100 I think we ended up with a really killer system. As I mentioned, I’m not including the price of the cables and RGB extras as those aren’t really necessities, but are just some nice options if you want to spruce up a completed build and customize to your liking.

I have no doubt in this systems capabilities to power modern games at 1080p as well as some 1440p gaming. I played some Rainbow Six Siege on it at 1440p on Ultra and it handled it like a boss. I will be doing a follow up video with benchmarking on the 1600. I’ve actually got a few graphics cards on the way that I think many of you are going to be excited to see introduced to our new game testing.

On top of games I want to run render time testing, dolphin emulator and other CPU intensive benchmarks that I think will really help exemplify the amount of power you are getting in the 12-threaded Ryzen 1600. The entire Ryzen lineup is remarkable and never siezes to amaze me with it value and how it makes a high-end workstation affordable for people out there that can’t drop close to two grand on a fully specced X99 system from Intel.

But please let me know your thoughts on the build as always down in the comments, including what you may have done differently. If you want links to the parts used here in the system, I’ll be sure to link to them all individually down in the description below. If you enjoyed this build video don’t forget to leave a like below and subscribe if you’re not already, but until the next video, I’ll catch you guys next time, turrah.