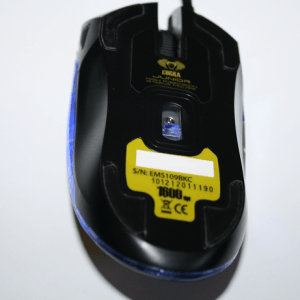 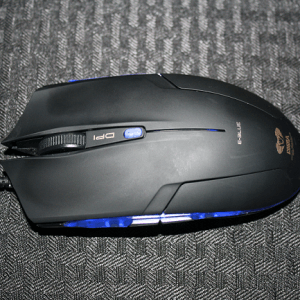 Professional gamers know that the price of a mouse doesn’t always relate to its effectiveness. In fact many of the most-used gaming mice in professional circuits aren’t even labeled as gaming mice, like the Microsoft Intellimouse 3.0.

Released about a year ago the E-Blue Cobra came into the gaming mouse world as a budget option for entry-level gamers in the under $20 category. It’s attractive look, large size, and flashy blue LED lights caught the eyes of many gamers looking to save a buck. Since that time, Chinese manufacturer E-Blue also released a mouse that they called the Mazer and lowered the price of the E-Blue Cobra to around $12. In this post we’ll take a look a close look at the Cobra and it’s features and compare them vs. the newer Mazer model.

On its website E-Blue lists the Cobra’s specifications as the following: 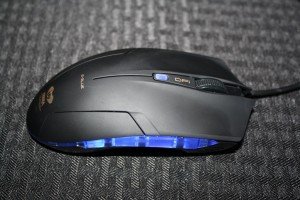 DPI: The DPI has a quick button and on their website E-Blue says that its adjustable from 600,1200,1800, and 2400 DPI. My particular version, model EMS131BK appears to have up to 1600 DPI despite having the same name. There appears to be a Cobra Jr. which I purchased and a standard Cobra. Despite having the name “Jr.” It is exactly the same size as the other version so personally I’d go with whatever one you can find cheaper.

E-Blue Cobra Review and Impression After some Use:

When I first received the E-Blue Cobra I was surprised at just how large it was. Putting it up against my G500 it was very similar in length (maybe a bit longer) and a bit shorter in width. This is ideal for people with medium to large sized hands. The cover feels very similar to the satin wide grip on a G9X. The scroll wheel is made similarly to other mice like the DeathAdder, but overall feels a bit more flimsy. E-Blue uses an AVAGO 5050 chipset sensor which is cheap, but precise for the money you pay for this mouse.

Overall the DPI switching is good and the mouse feels well-built for something you can get from $12 to $15. One problem I did notice is that I couldn’t find a way to turn off the LED lighting. If you keep your computer in your bedroom, then you’ll definitely need to either unplug it at night or cover it, yes it’s that bright. 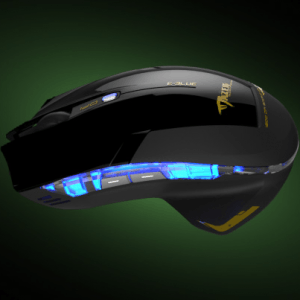 While I’m not sure what I think about the name, the Mazer, listed by the manufacturer as for professional gamers, is a newer model by E-Blue that offers a few features that the Cobra doesn’t have for about $6 to $8 more. This seems to be a fair price considering that the Mazer has a better sensor in the Avago 5090 Chipset, a braided cable, additional DPI (500,1250,1750, and 2500dpi), and an extended click life. Another really cool feature you’ll find on the Mazer is a thumb rest and pinky rest which E-Blue compares to “aircraft wings”. While some of that may be lost in translation you get the basic point. Another advantage that the Mazer has vs. the Cobra is that it comes with a more durable rubber scroll wheel.

There are versions of the E-Blue Cobra and Mazer available for both right and left-handed gamers. Be sure to pay attention to the mouse type.

For $12 the E-blue Cobra is a really good mouse. While I would probably lean towards the Mazer for its additional features, the Cobra does exactly what it’s supposed to, which is to offer an affordable mouse where no other manufacturer can. Getting into the $20 range with the Mazer you should also look at other good gaming mice like the CM Storm Xornet, Perixx MX-1000 Iron, Gigabyte Dual Lens Gaming Mouse, and Team Scorpion X-LUCA which many may prefer. Still, at the $10 price category, the Cobra takes the cake.