The Elgato Game Capture HD60 S will be available on April 18 for $179.95 or €189.95. Elgato is running a new “early access” program where users can sign up to be one of the first to try out the HD60 S with special “Day 0 Edition” branding on their units. The signup form is here.

Let’s take a look at what this Elgato HD60 S (for short) is and how it differs from the normal HD60 and HD60 Pro.

The HD60 S comes in a similar form factor to the original HD60 capture card – but with more clear emphasis on the “HDMI IN” and “HDMI OUT” labelling (the labels on the HD60 were very hard to see) and an almighty USB Type-C connection. This replaces the standard mini-USB 2.0 found on the previous models and is necessary for the higher fidelity image quality and low-latency streaming via the “Instant Gameview” mode.

“Instant Gameview” is a feature previously only available on the Game Capture HD60 Pro model, which allows the video preview (via their Game Capture software or a third-party streaming app such as OBS Studio to have very minimal latency between the real-time video stream and the feed that’s being recorded or broadcasted.

Such latency issues made live streaming with the previous Game Capture cards very complicated when using third-party apps, as manual delays had to be applied to microphone inputs and any webcam inputs within streaming software to sync them up together.

Besides the Instant Gameview feature, how does the HD60 S stack up against the previous HD60 models from Elgato?

For the first time, Elgato is requiring users to be running Windows 10 64-bit and have an available built-in USB 3.0 port to connect the device. This requirement will limit who can actually use the card. Thankfully the HD60 S does not require a USB Type-C port, specifically, and a USB Type-C to USB 3.0 cable is included in the box, along with a HDMI cable and the device itself.

Priced in-between their primary HD60 capture card and their more professionally-oriented HD60 Pro model, this device features a nice middle-ground of the capabilities of the two cards. 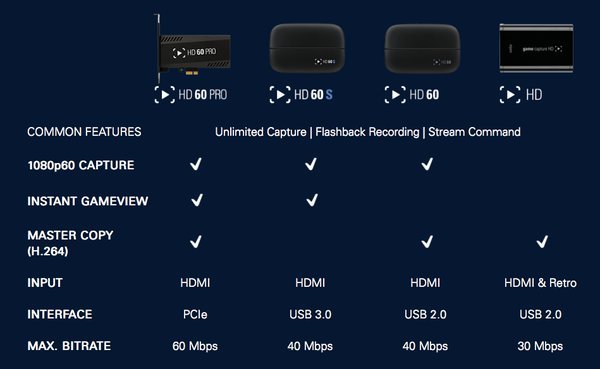 The HD60 S also feeds an uncompressed video signal to the user’s PC to help keep the latency down, and so users can also use third-party apps such as VirtualDub or OBS Studio to record a lossless or completely uncompressed video file from the device. While lacking 10-bit color depth, this does pose the HD60 S and HD60 Pro (which can also do this) closer as a competitive to more professional capture solutions (such as from BlackMagic) for those who want to capture the highest possible quality from their HDMI sources.

Where this new device differs from the HD60 Pro, however, is by lacking dual encoders. The HD60 Pro features dual H.264 encoders to deliver a full 60mbps “Master Copy” stream to the user’s hard drive as a local recording and stream a lower-bitrate stream copy to Twitch, YouTube Gaming, etc. This means that HD60 S users must choose between having a high-bitrate local recording or a lower-quality live stream copy. This shouldn’t be a big deal for most users.

While YouTube-compressed uploads don’t entirely convey the video quality that can be achieved by any device, Elgato has uploaded a few quality samples at 1080p 60fps to provide a general idea of what videos from the HD60 S would look like on YouTube:

At this point, Elgato has covered every price point between $100 and $200 with a capture card that does something for just about everyone. The original Game Capture HD is still a great pick for those looking to record older retro consoles or get very basic 1080p recording over HDMI, whereas the HD60 Pro is what those who stream or record on a more professional level might want – with the dual H.264 encoders and uncompressed access via PCIe.


Those looking to stream and want an external solution, but have a powerful PC to drive it, the HD60 S now poses an appealing choice to buy. However, if you have a desktop with a free PCIe slot, it’s hard to not recommend just saving up the extra $20 to get the HD60 Pro instead.