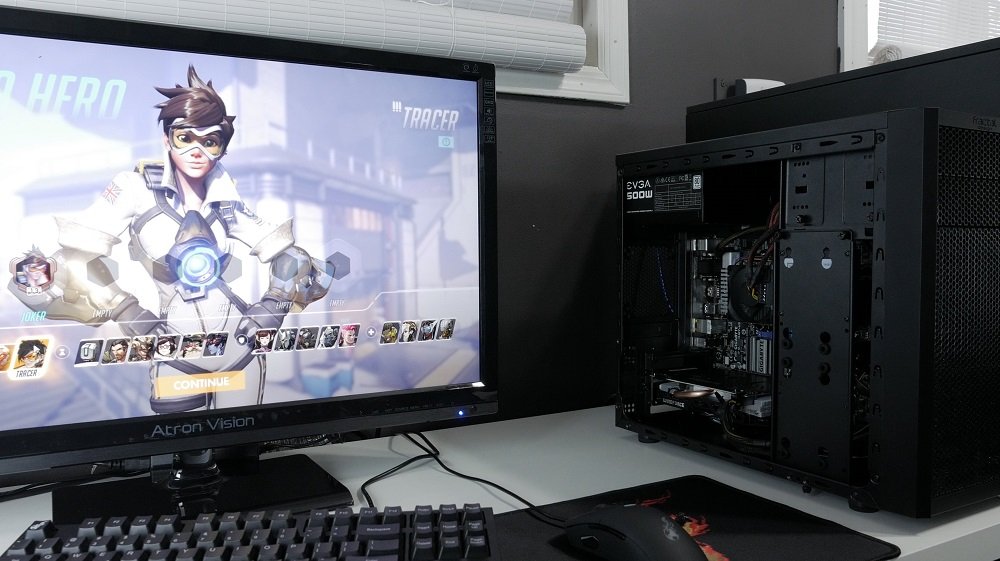 Recently after playing the Overwatch beta and seeing how well optimized the game was, I became curious about how well this title from Blizzard, creators of the famous World of Warcraft franchise, could run on a $400 Gaming PC.

Roughly its the price of a modern gaming console.

I decided that to get the best build for the money, I would have to build an AMD Gaming PC for the right price to performance ratio. Let’s explore some of the parts used in this build and my decision-making process behind those choices. 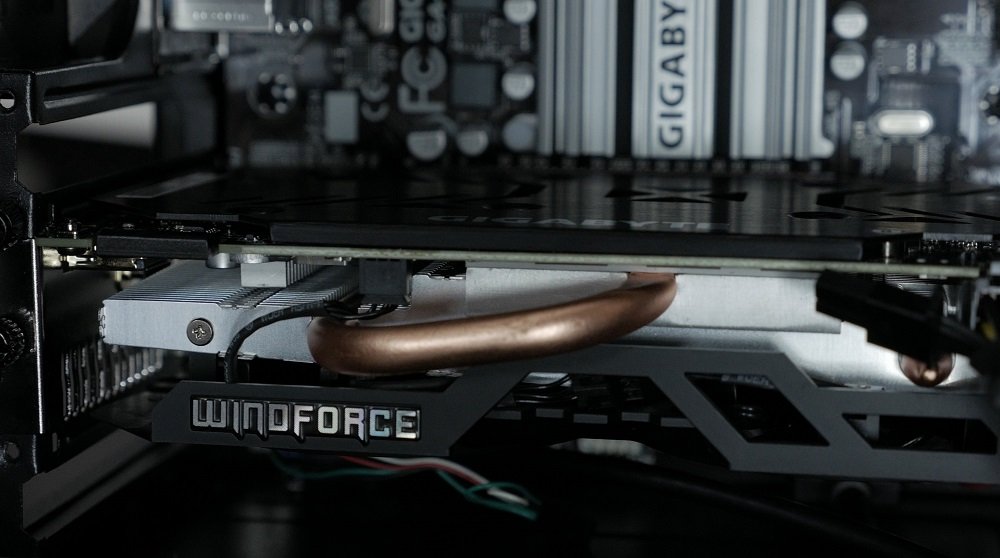 I knew that I would need a graphics card under $150 and the most obvious choice for me was the R7 370 2GB card. I wasn’t picky about which model to get as I just went with the cheapest R7 370 which also turned out to be quite the nice little card from Gigabyte.

The cooler on it performs very nicely to help keep temperatures below 65C and even when overclocked in the mATX enclosure we went with.

The card is also aesthetically pleasing to my taste being an all black design which is rounded off with a sexy backplate to give added rigidity and protection to the PCB. 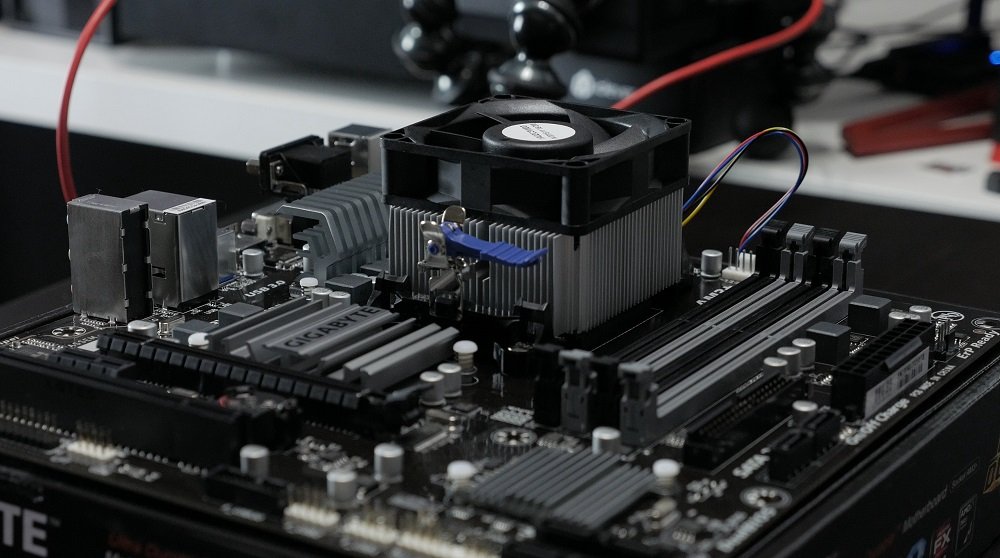 I wrestled with this part choice quite a bit as spending an additional $20 would have allowed me to go with the FX8320, an 8-core part from AMD. However, in my stubbornness to build a gaming PC under $400 for playing Overwatch at ultra settings, I settled with the 6-core, FX6300.

I can report that this was in no way a limiting factor in my testing of Overwatch, seeing my CPU stay at a comfortable 40% usage even in the thickest of engagements with effects turned up. This meant that I had plenty of headroom for CPU performance.

The motherboard, like the graphics card, was just a matter of finding the most affordable board available, but I did have one requirement. It needed USB 3.0 support because I wanted a case with front panel USB 3.

Once again Gigabyte came in with the clutch victory with the 78LMT-USB3. With naming like that, I knew I was in the right place. There was absolutely zero mistaking whether or not this board supported USB 3.0. 😛

How Much Memory Is Enough?

A lot of people ask me what the right amount of memory is for a budget gaming PC. For years, the answer has been 8GB and that has not changed. I picked up 8GB of Crucial Ballistix @1866MHz which should be plenty of memory for our purposes.

On the storage side, I decided to go with a $60 PNY 240GB SSD and favor speed over mass storage. I thought it more important to get the system up and running with options for expansion later. I could have gone with a 500GB WD Blue drive for about the same price, but for me speed trumps space on the boot drive. Let’s just get this thing up and running the fastest it possibly can and then we will worry about storage on the next paycheck.

Choosing a Good mATX Case Under $40 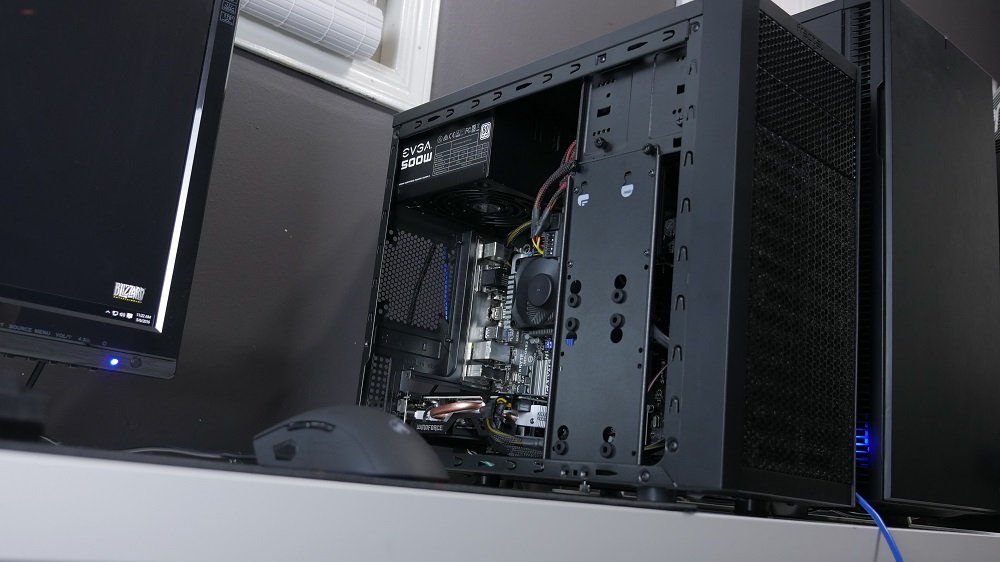 I spoke previously about wanting USB3 support and the reason for that was the Fractal Design Core 1000 which is arguably the best mATX case under $40. The open design of the interior and lack of traditional hard drive enclosures give it excellent airflow.

Hard drive mounting is achieved with a metal piece that extends across the length of the case vertically from the bottom of our 5 ¼” bays. Here you can attach up to 3x, 3.5-inch mechanical drives or four, 2.5-inch drives. For a smaller build, also check out my mini ITX build in a bag post from a few weeks back. 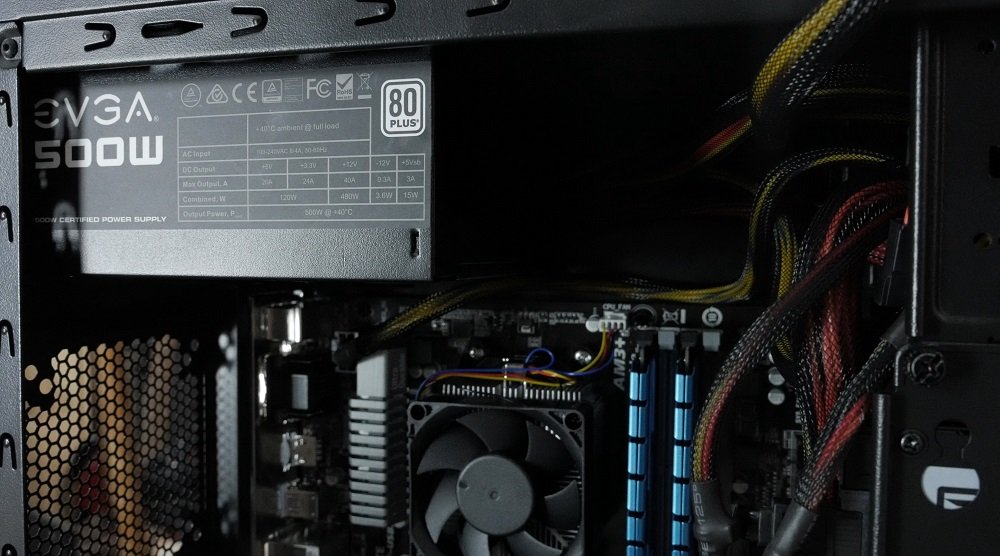 For the power, I chose to stick with EVGA, whom in my opinion makes the best PSU’s you can get at their price point. These are often competitive with even more expensive options from Corsair. The 500W model was enough for this build.

It is worth noting this is a non-modular power supply. This means that all of your cables come pre-attached and you’ll have to factor the storage of those cables into your build process. I used the vacant 5 ¼ inch bays for my extra cables that went unused. Overall this allowed me to keep airflow ideal through the case by only using the included front fan and our stock cooler from AMD on the CPU. The latter helped with the price as I did not have to put any of the budget in jeopardy for a third-party solution.

Okay, so can it run Overwatch? It can and not only that, but we were able to achieve an average frame rate of 65 in a full multiplayer match. The game was also being played at full 1080 HD resolution and a mixture of the in-game ultra and epic preset with 100% resolution scaling.

For a system that costs as much as a console, this is really impressive on a brand new game here in 2017. They call it “Blizzard Polish” for a reason because Overwatch is a prime example of how well a game can run when the developer’s take the time to optimize for a wide range of hardware.