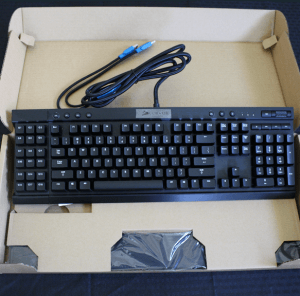 I’m an avid PC gamer who enjoys all types of genres, but I especially enjoy FPS-type games. Specifically, I have a group of friends who play competitively a couple of times a week. Recently one of the members of my team purchased the new Corsair Vengeance K95 mechanical keyboard so I asked if I could un-box it and do a review of it before he began to use it. Whether or not it helps him in the game is yet to be decided, but the features for this keyboard certainly look promising.

I think when you ask this question you really have to ask what the appeal of all gaming focused hardware is. Overall, gamers are looking for an edge over the competition. While there are many better ways of doing this for beginners, professionals separate themselves by a fraction of a second. It’s at this skill level where gaming hardware like a mechanical keyboard shines. 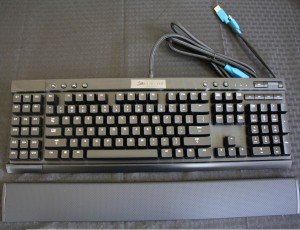 Mechanical keyboards give you a tactile feedback which helps to make you quicker over time and unlike a rubber dome keyboard you don’t have to bottom out the keys in order for it to register.

There are four main types of Cherry MX mechanical switches which differ based upon feedback level and response. The K95 uses a red MX mechanical switch, probably the most popular for FPS-type gamers. It has a moderate level of feedback and doesn’t require you to press down quite as far as other switches.

Unlike the previous K90 version, the K95  is 100% mechanical and as so is a bit pricier than the K90. It seems well worth the cost to not have that feeling of some mechanical and some membrane keys as you move across the keyboard. In addition to this the macro keys now seem to be a bit higher. 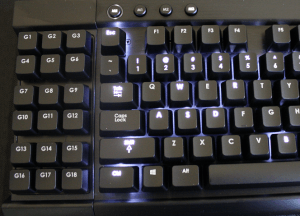 In addition to the keys the K95 has white LED lighting vs. the Blues in the K90. As you can see in the picture to the right you get M1-M3 memory banks which have a preset lighting mode for First Person Shooters, MMORPGs, and Actions RPGs. These can also be modified for customization.

Corsair really built this keyboard like a tank. That being said if you spend this much for a keyboard, then you expect to get something that will last you a long time. The Aluminum uni-body construction gives it increased strength and ruggedness.

If you’re not used to using G-keys or don’t want them, then the K70 is another really good option that Corsair has available. If you want up to 54 presets and key combos for MMORPGs, and fighting games, then you’ll fall in love with its flexibility. 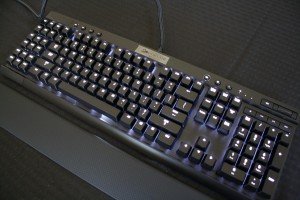 If you move quickly on the battlefield and often press multiple keys at the same time or very quickly, then you know just how limiting a rubber dome keyboard can be. With 20-key rollover every key that you press counts. with 100% Anti-Ghosting.

If you’re like me and use your gaming equipment also at work and home, then having a wrist rest gives you long hour comfort during all times. If it gets to be too much of a hassle, then you can simply remove it.

USB 2.0
The Corsair K95 Vengeance is a wired keyboard which gives you up to a 1000HZ report rate. There’s a also a side feature that gives you options between 8ms, 4ms, 2ms, 1ms and BIOS mode for those who want advanced options.

Multimedia Keys
When I’m playing I like to have all the volume options right in front of me. The K95 uses a volume roller and has a stop, previous, paus and play, next, and mute button.

The K95 comes with a 2 year warranty, but our guess is that you won’t need it. This keyboard is sure to be a good competitor with other favorites like the Black Widow, Ducky Shine II, and Das Keyboard. If you have the money, then it’s a solid investment for your long-term professional or casual gaming aspirations.

For more information be sure to check out Corsair’s Website.