Loctek recently contacted me about reviewing one of their monitor mounts. As I use a pair of monitors and am thinking of upgrading to a no fewer than four monitor setup in the next couple of years, I agreed but asked if they’d send me their D5D and D7D model so I could compare them.

For all intents and purposes I knew that the D5D would handle my 24″ to 27″ monitors; however, it was the quality of the D7D I really wanted to test. Being able to position my monitors precisely where I need them to be is important to me. 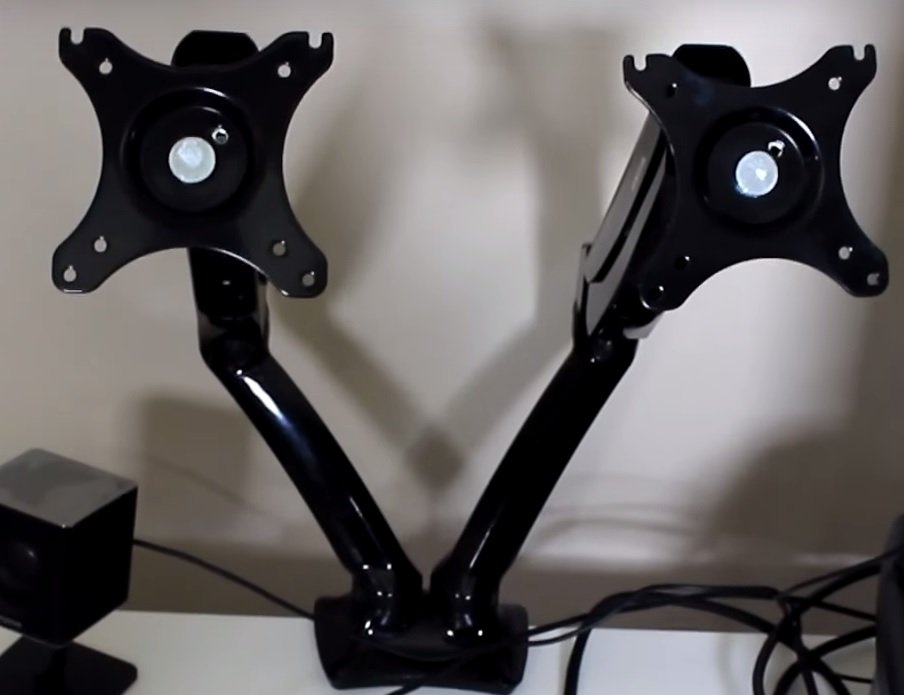 The D5D dual monitor mount costs around $100 and is aimed at users who want an inexpensive and ergonomic option for mounting their monitors. It fits in the middle of cheaper and less attractive $50 models and gives as many features or more than many other models in its price range.

Upon unboxing, the D5D feels fairly substantial. On the other hand, it has more plastic on it than I originally thought. The arm mounts are covered in a protective plastic covering which was a bit difficult for me to remove as it got pinched up underneath the arms.

The D5D uses standard 75mm and 100mm VESA mounting holes that can be found on many monitors to attach the monitor to the mount. Before you buy this product you’ll want to make sure that whatever monitor you’re using has these holes. The mount itself can be clamped to the back of your table or installed through a grommet system for those who have, or would rather drill, holes. 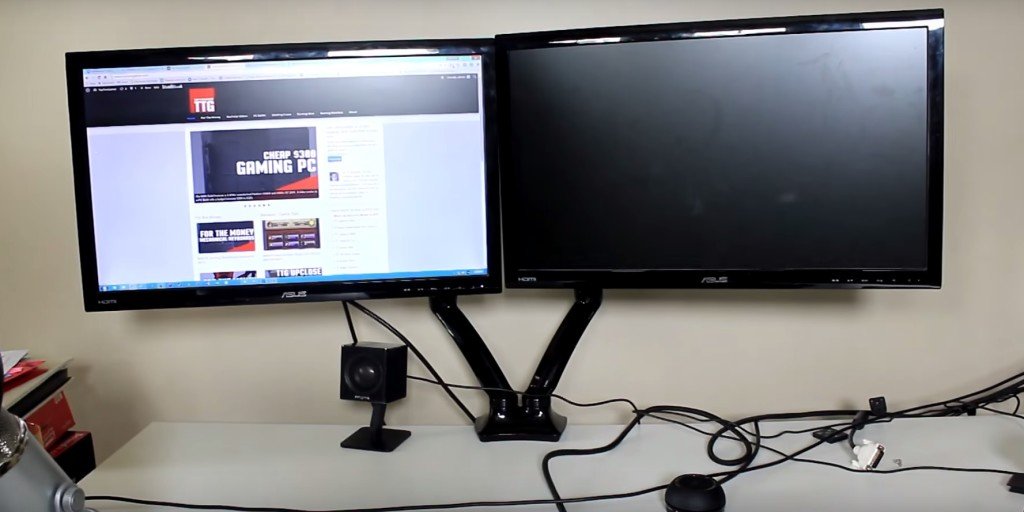 For adjustment, it has a gas spring hovering system that easily allows you to adjust the height. Once you have the appropriate height, simply adjust the tension on the mount to ensure your monitors stay in place. I used 2 24″ monitors from Asus which had no problem staying perfectly in place. Loctek lists the maximum weight as 11 pounds per arm or 22 pounds total for their mount. After installing these monitors, these numbers seem accurate.

You can also horizontally rotate your monitors with the D5D’s hinges. Cable management is done through the bottom of the arms and Loctek includes a plastic cover for your cables.

Overall, the D5D works as intended. In my opinion, it’s attractive and competitively priced when compared to competitors like AmazonBasics, Halter, Mount-It!, and Vivo. It also is easier to adjust and adds a bit more height than other budget options out there.

It’s a bit difficult to receive a budget product and then review it side by side with a product which costs twice as much and remain unbiased. The D5D is a quality product for its price level and certainly does the job of fitting your monitor into any workspace. That being said the D7D is much more smooth in design and adjustment.

Unlike the D5D, the D7D feels like a piece with the Loctek advertised “aircraft-grade aluminum”. The arms themselves shine and truly make it look fantastic. Unlike some clunky mount options out there, the D7D’s gas spring hinge and single arm are as slick as butter. The clamp, grommet, and everything about the D7D is even more substantial than the D5D and has to be in order to support the nearly 20 pound per arm weight limit.

The D7D is installed in the same way as the D5D through the clamp, grommet, as well as 75mm and 100mm VESA holes. It took just a few minutes to add the clamp to the stand, pads to the clamp, and then clamp it to my desk. Cable management is done through the upper and lower portion of the arm and a plastic casing goes over the top.

Adjusting the mount on the D7D was a bit easier than the D5D. Loctek uses more of a ball hinge system that allows for easier movement and allows for a slightly higher degree of tilt (-90 to 15 degrees)  and swivel (-90 to 90 degree) angle.

The monitor also reaches up substantially higher than the D5D as well as many other mounts out there. If you’re looking for a monitor mount which has a high reach, this one will probably do the trick. You can see my video below to get an idea of just how heigh it will go.

As with the D5D, you can lock the tension of the D7D in once you have the exact location you want it to reach.

The D7D also has a hub on the bottom of the mount that has audio as well as USB passthrough. This is convenient for those who keep their PC tucked under their desk.

Final Thoughts and D7D vs D5D

The D7D is twice the price of the D5D. If you don’t need something heavy duty, it might be advantageous to go with the D5D. That being said I like the height and easy adjustment options of the D7D. It costs about twice as much and feels about twice as substantial. In addition, it adds to the look of your office rather than simply blending in. Overall, I’d recommend both of these products at the $100 and $200 price points for those looking for a more substantial solution than other cheap or poorly designed dual monitor mount options on the market. Feel free to ask me any questions you have about the mounts in the open discussion area below.