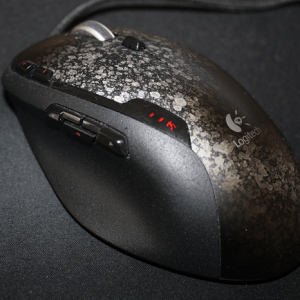 It’s hard to be a consumer in today’s world and not get lured in by false promises and advertising. Often, I think about all the reviews I’ve done for new products and what I’d think about them if I’d used them over time. Some of them certainly would have deserved the praise I’d given them, while others would fail over time. Perhaps some of the products I disliked at first would have received updates and improved for me as I used them as well.

Lately I’ve been reviewing a lot of gaming mice. This includes the new 2013 Razer DeathAdder as well as the COD MW3 Logitech G9X as well as plans I have for several more. I’ve used versions of both of these products in the past and been impressed with there wear over time. Did they make me a better gamer? Perhaps a little bit, but the majority of my improvement has generally come from practice.

Instead of my normal review I thought I’d do something a little different and review a product I’ve used extensively over the last two years, the Logitech G500. I originally chose the G500 because I wanted something that I could use for both work and gaming. This particular mouse was especially attractive to me because of its weight tuning options and believe it or not its dual scroll mode. Dual scroll mode is something that can be found on other mice, but I really like the feel of it that Logitech gives in the G9X and the Logitech G500. 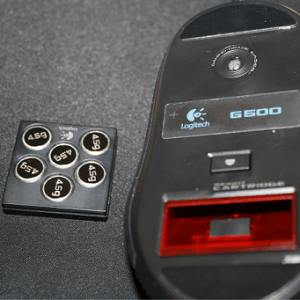 Logitech advertises this particular mouse as having a laser sensor. Since it has the same one as the G9X it naturally has the same DPI at up to 5700 dots per inch. Despite having heard I’d be better off with a hard mat for this particular mouse I still enjoy using the SteelSeries QCK mat along with it. I’ve read numerous reports about how an optical mouse actually performs better on cloth, but have still not been able to  notice a difference in accuracy between it and the DeathAdder on the QCK.

Wear and Tear
As you can see the years have been mostly kind to the G9X. If I was just looking at the body of the mouse itself I’d certainly have no complaints. As you can see the only thing wrong with it is actually that the paint color has rubbed off a bit. Like the top, the bottom has warn surprisingly well and the slick feat still appear to be in nearly as good as shape when I originally bought it. It’s a little scary to see the dirt and grime that comes from two years at being on my desk, but I’ll give it merit for livability. 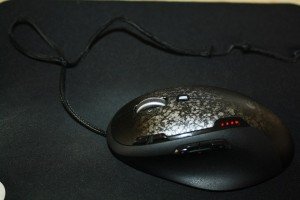 If there was one thing that has bothered me on this particular mouse its that the braided cables would twist and then never come undone. For some reason after time the cable tightens in the area that it gets twisted in and won’t allow you to untwist it as you can see in the picture.

I decided at some point in time that I’d remedy this by making a small incision. That was probably a bad choice as it would have looked better if I’d simply left it slightly twisted.

Would I buy it again?

My current one looks like it’ll serve me for a few more years, but yes, I wouldn’t think twice about buying another one. While it may not be the most expensive or accurate mouse on the market, it’s my favorite when it comes to everyday work because of its slick look and ergonomic design. It also does a good job for gaming.