If you’re an elite gamer, then you know that no equipment that you can purchase is going to make up for a lack of practice. In Battlefield 3, for example, if you don’t have a good understanding of a map and its hiding places, you’re at a serious disadvantage. That being said if all things are made equal, then it’s the small details that really make the difference between a gamer that is good and one that plays on a professional-level.

Today I’m reviewing a mouse that’s not new, but is worth looking at in terms of its of precision and accuracy as well as its overall bang for your buck . The Logitech G9X came on the scene in late 2009 and since then has been a favorite among gamers looking for precision and flexibility. I’ve used the G9X in the past along with the Razer DeathAdder and the G500. I like all of them for different reasons; however, the G9X usually came in at a considerably higher price point than both of those models. Enter the Call of Duty MW3 Edition of the G9X.

Originally released in November of 2011 Call of Duty Modern Warfare 3 was added to the COD series which has become one of the most popular FPS series of all time selling over 100 million copies. With the

release of Modern Warfare 3, companies scrambled to release popular series branded gaming peripherals. Logitech featured the MW3 game logo on its G9X and did so in large quantity. Thankfully many of these are now still available for a deep discount nearly 2 years after the games release. Considering Logitech has closed production on its super popular gaming mouse, now is a good time to stock up if it’s something you have to have.

Is the Logitech G9X COD MW3 version the Same as a standard G9X?

Yes, in fact the interchangeable grips can be switched out between a standard G9X and a Modern Warfare 3 one. There is no discernible difference between the two except for the logo and an additional mouse pad that the MW3 version comes with. Here is a brief unboxing video we did which shows precisely what this particular model comes with:

If you like to change your grip depending on what type of game you play, then the G9X might just be for you. The Logitech G9X comes standard with 2 interchangeable grips, wide and precision. The wide grip has a satin feel, is ergonomic, and ideal for those who like using a palm grip while gaming. On the other hand, the precision grip is for additional accuracy. It’s grip is a bit more course and it’s design is straight rather than curved. This is ideal for those using a more precise claw or fingertip style grip.

The Logitech G9X allows you to place up to 4 weights into its weight-tuning slot. Because it comes with four 7 gram weights and four 4 gram weights you can add as little as 4 grams or up to a max of 28 grams. This additional weight can add additional precision for FPS-style games. I tend to use it when I’m only playing a few hours at a time. 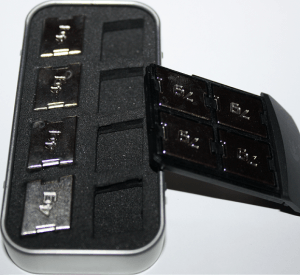 Onboard memory is ideal for those of you who like to play at LAN parties or tournaments. The G9X allows you to store up to 5 customized profiles which you can easily switch between by pressing a button on the bottom of the mouse.

Despite being a few years old the G9X is still one of the more accurate mice available on the market today. With a laser engine and up to 5600 DPI it gives you the precision you need for games where timing and targeting count. In addition you get full speed USB for a more immediate response. It uses the same laser engine as the G700 in the AVAGO S9500. Some may argue that a optical mouse is better on a cloth surface, but I find that the S9500 sensor still does particularly well on surfaces like the SteelSeries QCK. If you’re worried about how a laser sensor may perform on a cloth pad, then you may want to pick up a hard surface mouse pad rather than a cloth one.