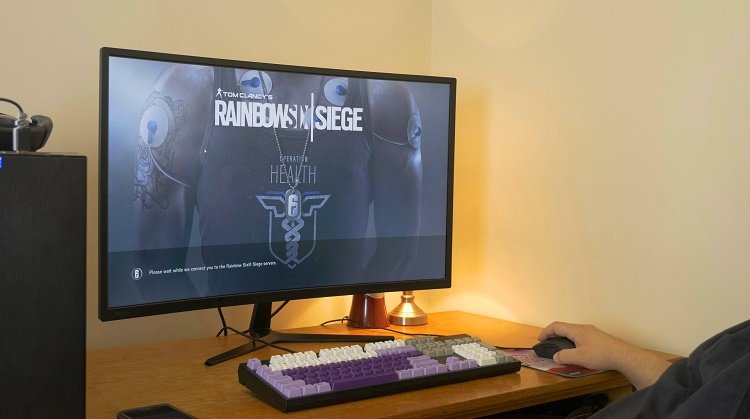 Pixio recently contacted us to review their latest offering, the Pixio PX325c Freesync monitor which retails for just under $350.

The display is a site to see in person standing 32 inches high with a curved 1920×1080 SVA panel and 144hz refresh rate. With this being a Freesync monitor, having a good operating range is important and this one here is pretty decent, with Freesync working between 59 & 144 frames per second. Pixio also offers a 24-inch version that’s nearly identical to this named the PX245c that I’ll announce the winner for on August 8th. Take a look at my channel Joker Productions on YouTube for more information.

I did an extensive amount of gaming on this monitor in titles like Rainbow Six Siege and Overwatch using an RX 580. Gameplay always remained smooth and responsive with no stuttering or tearing that would normally be introduced with V-Sync. AMD’s Freesync technology is doing exactly what it’s supposed to for that one. 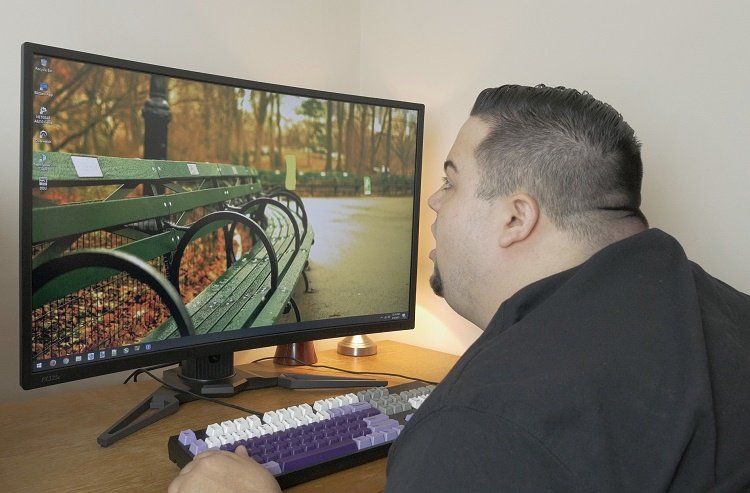 With this being a high refresh rate monitor I of course had to check it for any frame skipping and there was zero present, not a single frame was skipped in the test that I ran and played back here in slow motion for you in the video below after recording at 60fps. That’s what I like to see.

As previously mentioned this in an SVA panel, which is basically Samsung’s branded naming for a PVA panel, or “Patterned Vertical Alignment”. What this tells us is you can expect good colors and deep blacks thanks to the 3000 to 1 contrast ratio. I can say from my testing this holds up quite well and it had some of the best blacks I’ve seen on a non HDR or OLED display. 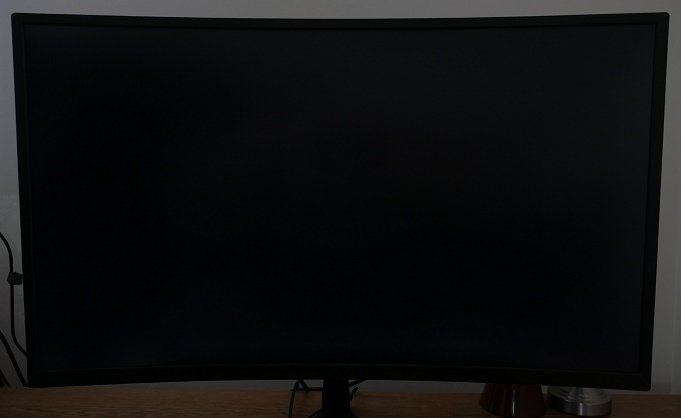 There was also no discernible backlight bleeding that I could see at the desktop or when gaming. When snapping photos at 1/400th shutter speed there are very subtle hot spots towards the bottom, but as I said they weren’t noticeable in normal operation or even when I put up an all black screen.

White uniformity was also terrific across the entire display. There were no gray or dark areas when getting close to the edges that can show up on some cheaper panels. Samsung definitely made a quality panel with this one and Pixio did a bang up job in choosing it. I also did test for things like gradient and color banding and it passed with… flying colors. Pun intended. 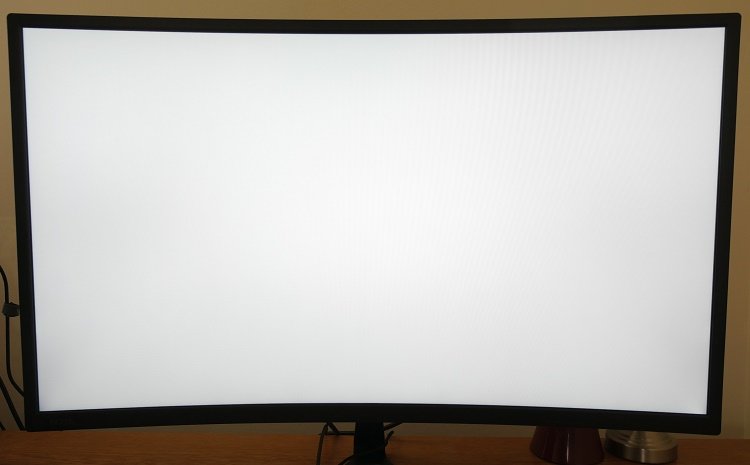 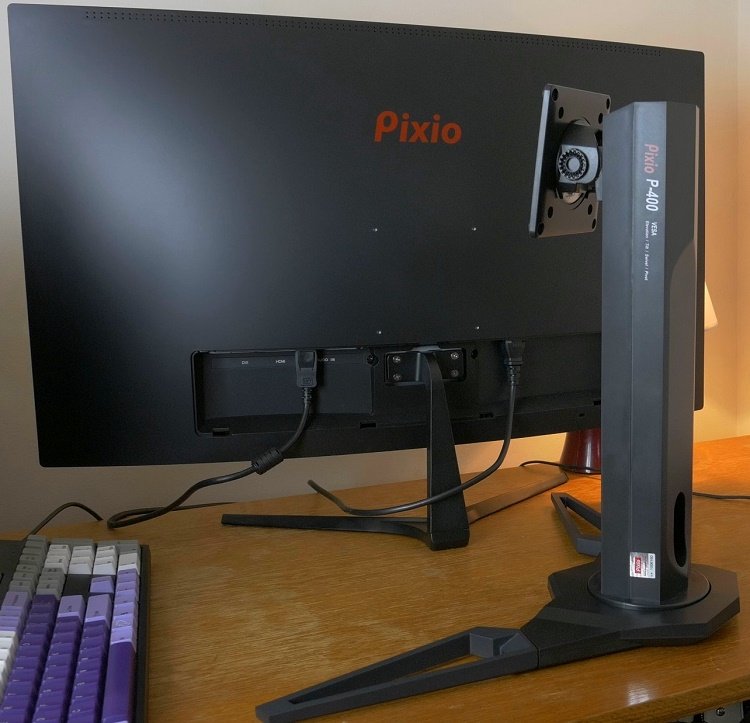 With performance out of the way let’s discuss the design on the PX325c. As you can see Pixio has gone for a matte black design on the entire monitor which is so greatly appreciated. I remember reviewing their PX277 a year ago which had a great panel just like this one here, but it fell short on its design with thick glossy bezels and a glaring red logo on the front of the monitor. It appears that Pixio has taken feedback on that and applied it to all their new monitors in 2017.

We have fairly thin bezels on here for a 32 inch monitor and gone is the huge red logo in the front, opting to put the monitors only branding on the backside which is also matte and not glossy. The only insignia on the front is a subtle dark gray lettering for the model number which doesn’t stand out too much at all.

Menu navigation on here was not the best at its just a basic button layout and on screen display. Perhaps for next years monitors Pixio can look at implementing a joystick design which is just much easier to use with getting around the menu’s.

For connectivity around the back we’ve got DVI, HDMI, Displayport and Audio in. The monitor did come with a displayport cable which is nice as you will need to use that to take advantage of freesync. And there’s also a cover you can use to hide everything if you like, but I honestly just left this off once my cables were situated so I can get to them easier if I need to. 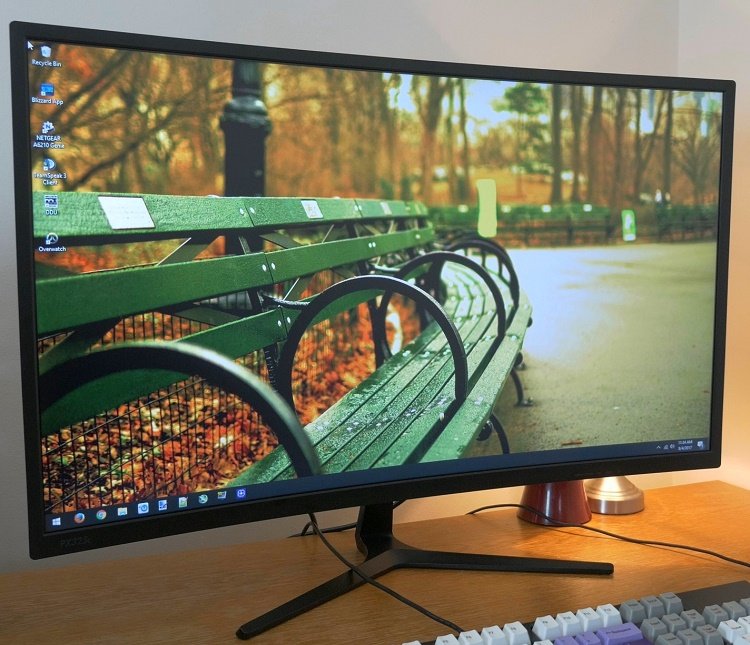 Last but certainly not least is the stand, which looks really nice honestly, but it is lacking quite a bit in terms of functionality, only offering the ability to tilt. Thankfully though Pixio sent me over their PX400 stand that retails for $60 and can mount to any monitor with Vesa support for 100 by 100 or 75 by 75. Since the PX325c has a 100 by 100 vesa mount I installed the PX400 in a couple of minutes and now it can tilt, swivel, pivot and have height adjust.

I did notice an option on Amazon for this monitor to get it with the stand that saves you ten bucks, but really anyone can buy the stand even if its not for a Pixio monitor. Just make sure your monitor has the appropriate vesa compatibility.

That wraps up my  review of the Pixio PX325c. I would definitely recommend this monitor to anyone interested in picking it up. One of my concerns going into it was that 32 inches would be too big for 1080p, but it was honestly very nice to use for desktop browsing as well as gaming. I’d be lying if I didn’t say I wish it had a 1440p or better yet 4K option as I think those resolutions would lend themselves really well to a display this size, but 1080p was still very good and its certainly easier to driver as far as gaming performance is concerned.