There’s no doubt of the heated rivalry that exists between AMD and Nvidia. Both companies are trying to achieve the same goal; Rule the GPU market by giving consumers the best possible graphics card at each price point.

To accomplish this, they use alternate approaches to many of the same problems with varying degrees of solutions. All of these solutions leave many consumers scratching their head with one hand and a fistful of cash in the other wanting to know where their allegiances should lie. For the under $500 to $600 price point, we’re here to help.

AMD’s Releases Their Answer to the GTX 980

In June 2015, AMD finally launched their new lineup of GPU’s in retaliation to Nvidia’s 2014 lineup of their Maxwell based architecture. In fact just mere weeks before the Fury was set to be announced, Nvidia leaned into the punch rather than backing away by releasing the GTX 980 Ti, arguably one of Nvidia’s most competitively priced and performing GPU’s to date by delivering Titan X type performance for a fraction of the cost.

AMD’s answer to this was the Fury X which had a lot of hype around its release built largely in part to AMD’s own enthusiasm for the hardware which utilized first generation High-Bandwidth Memory (HBM) technology. The prospects were exciting indeed, but with the Fury X only shipping in reference models utilizing an all-in-one cooler, it left something to be desired by the enthusiast crowd wanting custom PCB’s from trusted board partners like MSI, Asus & Sapphire.

This is where we get to the Fury with an MSRP of $550, a full $100 less than the Fury X. Definitely an interesting price bracket to be in considering that Nvidia had recently dropped the price of the GTX 980 lineup to $500 and has 4GB of memory like its Fury counterpart, though it does not perform the same as the HBM used on the new AMD chipsets.

For the purposes of testing these two GPU’s, I used the same system on each graphics card. On the Nvidia side, I used an EVGA reference model GTX 980 and for AMD, a Sapphire Fury Tri-X. The dedicated test system had no additional background programs or anti-virus running to try and keep the numbers straight down the middle as possible.

All games tested were done so at the highest available settings without using any specific technologies that would favor one side over the other.

For instance, Advanced PhysX was disabled in Metro 2033 and Last Light; for Witcher 3, no NVIDIA Hairworks were used. All other settings including anti-aliasing were set to the highest available values at 1080 & 1440.

The Fury GPU from Sapphire delivered solid performance at both 1080p and 1440p, though it was evident that for solid 60fps performance at 1440p some compromises would have to be made in terms of visual fidelity by lowering graphics options.

The one area that the Fury is severely lacking in is its ability to overclock in any meaningful way. This is what I feel hurts the Fury more than anything at the enthusiast level. If you are the type of person that doesn’t overclock and you just want a GPU to come out of the box and crush it, then the Fury is definitely a no muss, no fuss type of graphics card.

The highest overclocked I achieved was by about 50MHz, but even that was dicey in about half the games tested, resulting in driver crashes and having to reboot the system. When I was able to make it through an entire test run with the core clock increased to 1050MHz, it only was netting a roughly 1 frame boost in performance; something I felt was not worth the time or problems with instability it was causing.

For temperature, I never saw my Sapphire Fury card go over 75° and for the majority of that testing the fans didn’t even have to turn on. I credit this aspect of the design mostly to Sapphire who have produced a really amazing heatsink with 7 copper heat pipes for dissipation, but having that extra headroom in terms of thermal output made me wanting more from my overclock. 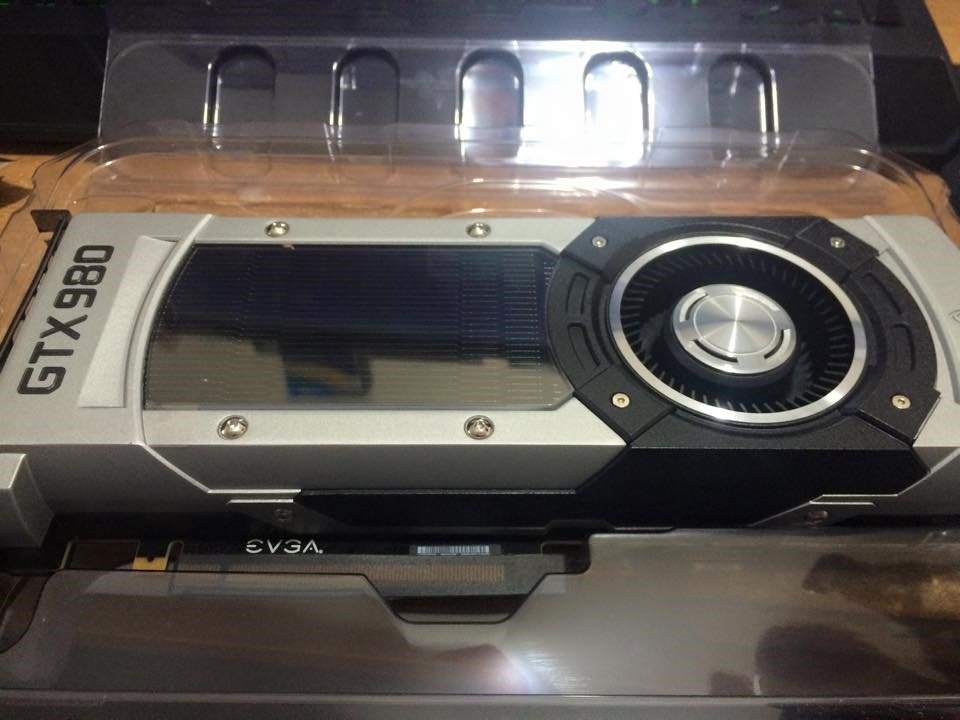 There is no question that in terms of out of the box performance, the Fury showed its dominance in the majority of games tested at both 1080 and 1440. This should in all honesty be expected as Fury is utilizing first generation HBM technology and comes in at roughly $50 more depending on the model. Where the GTX 980 really shines is in that extra performance you can get from just moving a few sliders around in Afterburner.

In addition to our benchmarks below, be sure to check out our 980 SLI vs. Titan X comparison and benchmarks as well as our 980 TI SLI Review. 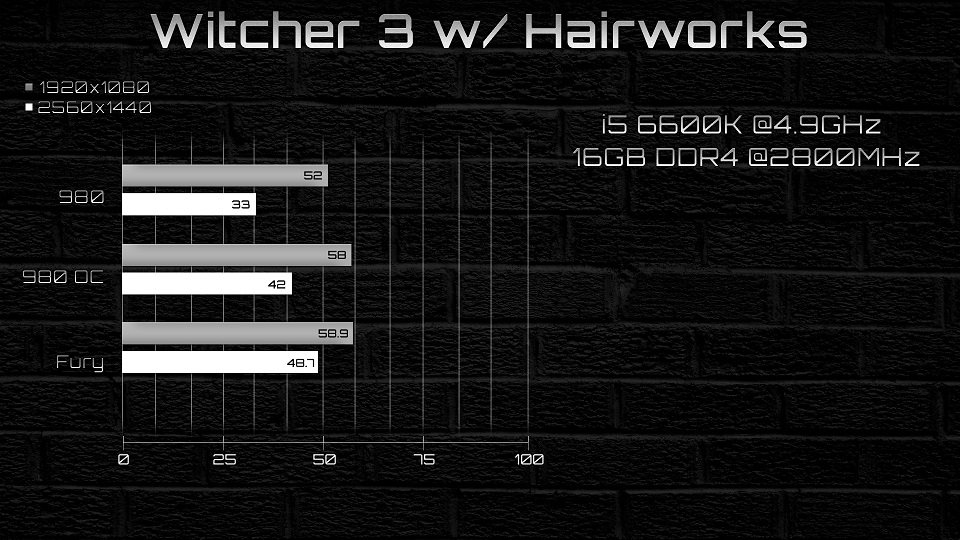 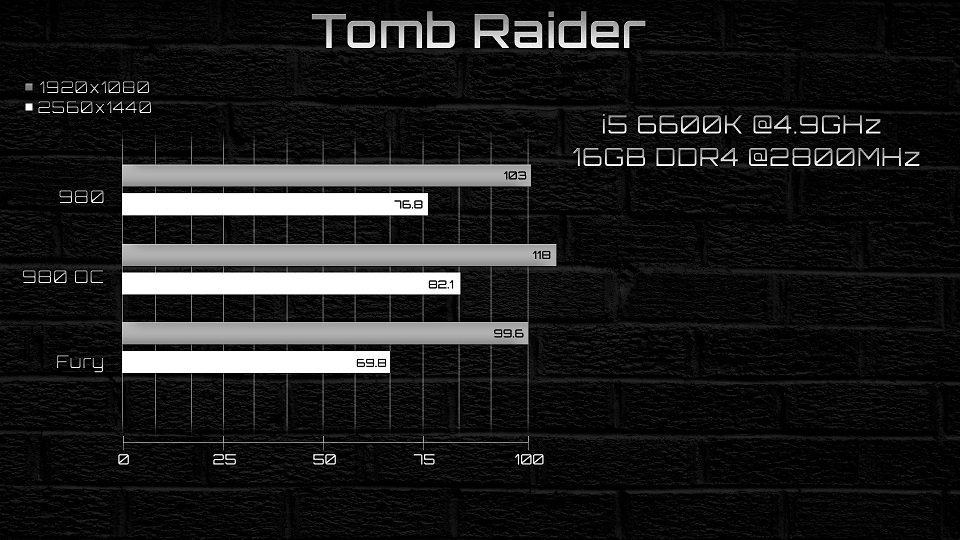 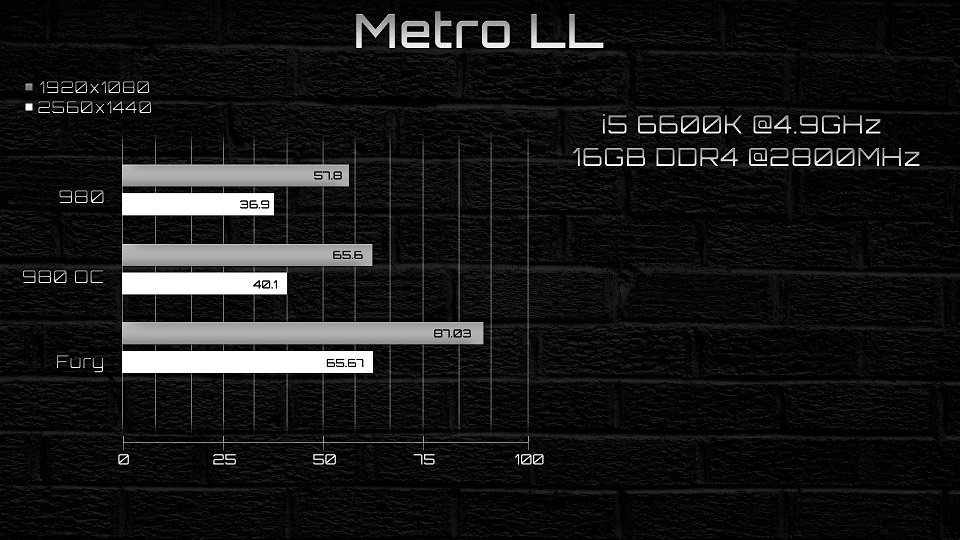 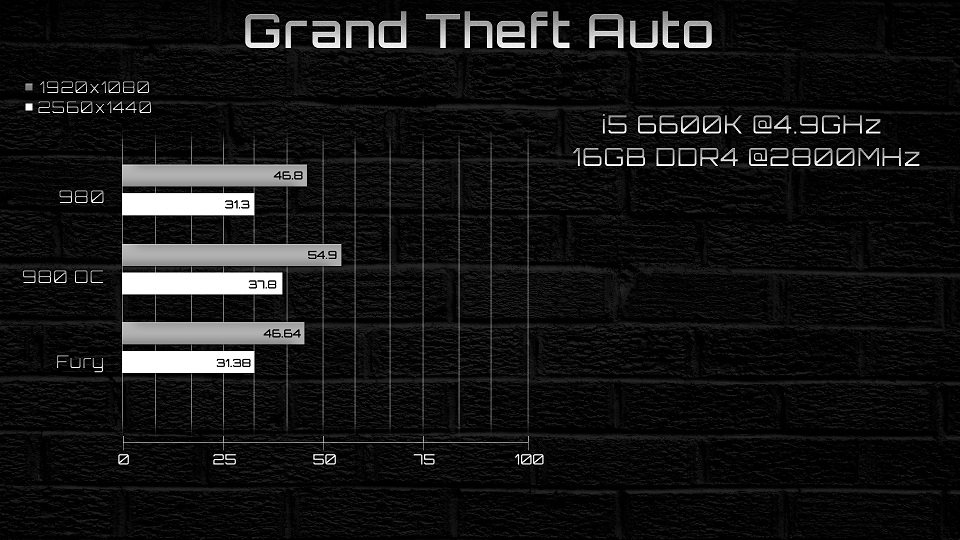 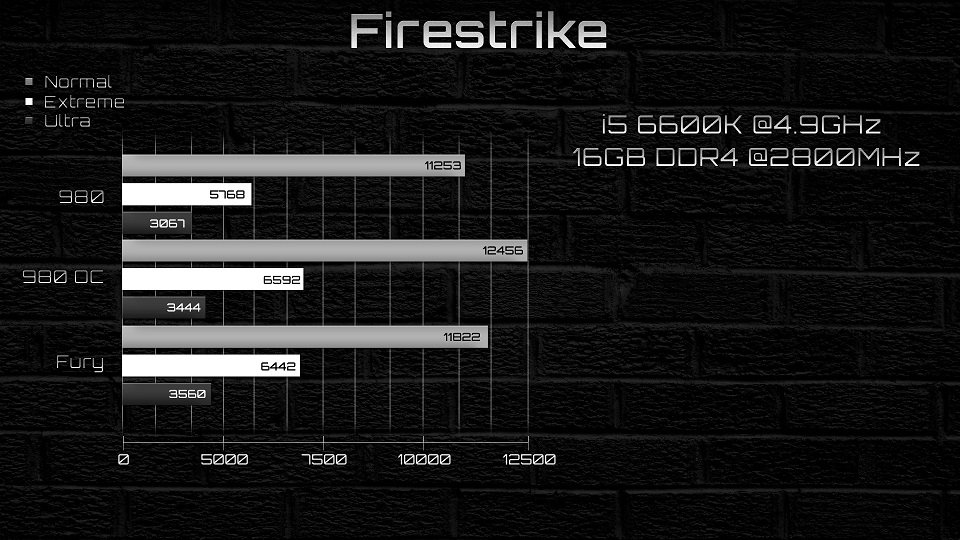 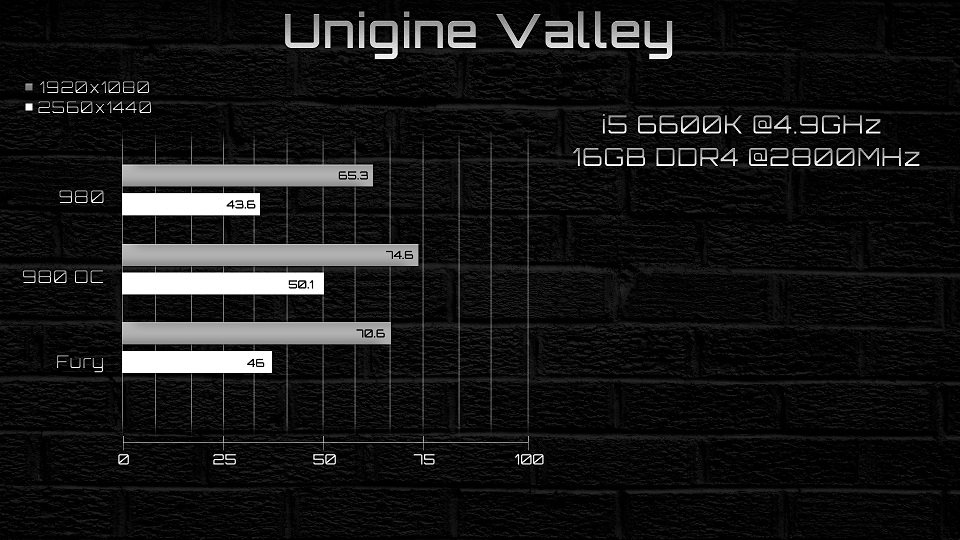 For performance, the 980’s additional overclocking headroom allows it to surpass the Fury and its stable out of the box performance.

It is for this reason, I’d advise most people to seek out the GTX 980 in the $500 to $600 space. Not only does it come at a lower price point, it currently includes a free copy of Metal Gear Solid V.