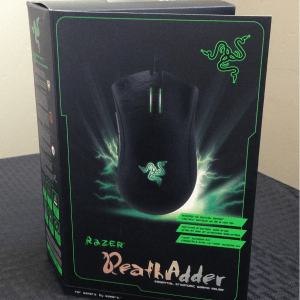 Finding a good gaming mouse in today’s market is not difficult. More manufacturers enter the race to try to gain some of the highly profitable gaming peripheral market share each year, and most of these models are more than adequate for gaming.  However, it’s not adequacy that gamers seek, but rather perfection. With its DeathAdder, Razer seems to be getting closer to this unreachable achievement each year.

Ever since California company Razer launched its first DeathAdder in 2006 it’s been a fan favorite. With Razer’s 2013 DeathAdder they certainly won’t find perfection, but they will find that Razer’s 2013 model has significantly improved vs. Razer’s DeathAdder 3500 which was released in 2009 and the black edition released for 2011 to 2012. Between 2009 and now Razer has released several, mostly cosmetic, changes to the DeathAdder; however, it’s this model that finally brings its accuracy and precision, once again, to the forefront of the gaming community.

Razer upgraded the DPI from 3500 to 6400. There are two differing opinions on this in the community. Kim Ron from SteelSeries says that most professional gamers use a DPI from 800 to 1600 DPI and “That (DPI) doesn’t make you more precise or accurate; I would argue that it does exactly the opposite.” Razer, on the other hand, says that “there are also more high-sense gamers around now, corresponding to the much larger screens and much higher resolutions available.” Ultimately, you’ll have to decide whether dots-per-inch truly matters to your play-style. 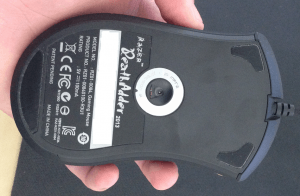 Perhaps a bigger and more important upgrade to the DeathAdder comes in the form of a sensor upgrade. The standard DeathAdder from 2009 used a 3.5G optical sensor while the new mouse uses a 4G infrared sensor. This brings more of what matters most in increased precision and accuracy.

I have to say that for me one of the changes that I liked most about the newer version is the improved ergonomic side grips. Where your thumb would sometimes slip on the glossy face of the buttons, now there is stability in a sort of rubber coating. This gives you better overall control and grip.

While it would be easy to leave the DeathAdder Review without additional details I thought it would be valuable to actually try out the DeathAdder for a while. I did so playing Battlefield 3 over the course of several nights. At first it was a bit of an adjustment coming from the G500 and G9x. I’ve also used the MX518 quite a bit in the past, but after an hour or two of gaming the DeathAdder really shined. It seemed to give me, perhaps, a slight increase in accuracy over what I was used to and just like any mouse it didn’t make up for my lack of knowledge of a few of BF3’s newer maps.

Where Can Razer Take it from Here

Before saying how Razer can improve its mouse it’s important to point out that the company keeps this mouse at around $50. Improving a mouse in the ways that I mention could indeed add to the cost.

After visiting with several gamers I know who use this  mouse regularly we came up with a list of a few things that  we’d like to see Razer implement on the next mouse while retaining its current price:

1.) Weight Tuning: Adjusting the weight of your mouse can increase its accuracy. It’s a feature I like to have whenever possible.

2.) Onboard Memory: Today, gamers want everything to be plug and play. Razer Synapse 2.0 is fine, but we want more!

3.) Free Flowing Scroll Wheel: Most of us use our gaming mice for more than just in-game situations. For this reason having an option to turn on a free flowing scroll wheel would be amazing.

4.) Logo Always On: It gets kind of annoying that the Razer logo blinks on and off. I really like the green color and it’d be nice to have an option to turn it on all the time. That being said for now you can switch it off by using software.

Here’s our unboxing and review of the 2013 Razer DeathAdder so you can get a closer look.