Star Wars Galaxy of Heroes Tips and Tricks for Beginners

I’ve not played Star Wars Galaxy of Heroes from the Beta like many I’ve come across but I do feel like I have a lot of advice to offer in terms of where both the free-to-play as well as pay-to-play player, should begin.

It all starts by having an understanding of the limitations of the game as well as knowing from the beginning what advantages you can exploit to get ahead of others on your server. Speaking of servers, SWGOH has a lot of them and when you start a game you’ll be matched against other people who started recently as well. This works well as it gives you a chance to rank on the server rather than being blown to bits by people who have already been playing for several months.

#10 Focus your Squad on Farmable Heroes 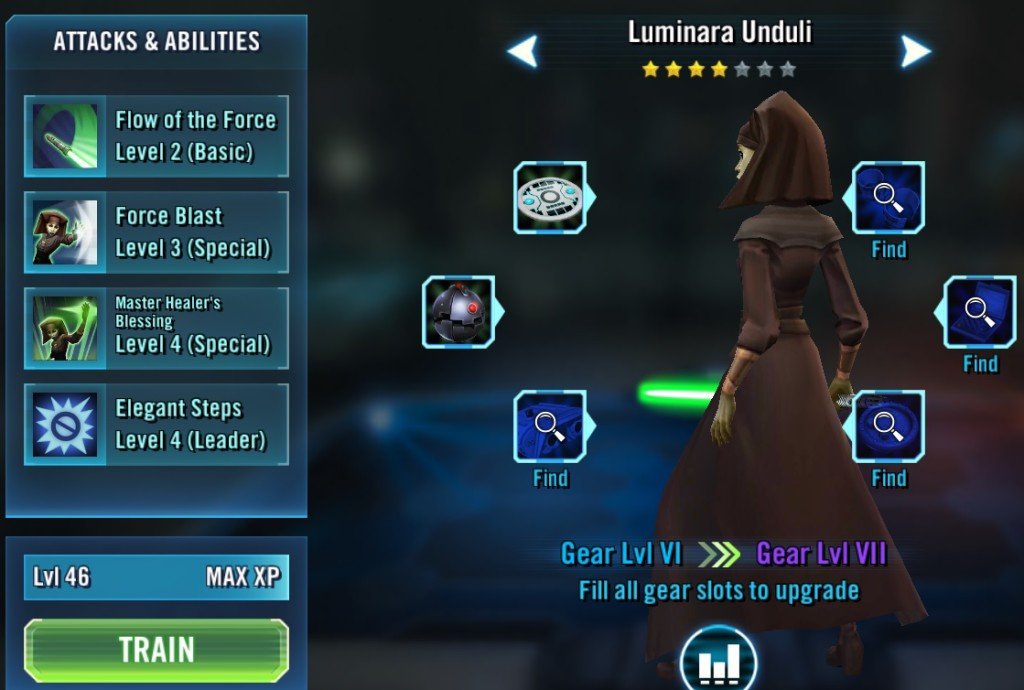 While you can get virtually every character in a chromium pack there are very few of them that you’ll actually want to level up. This is because many of the heroes don’t have available shards for you to farm. Without those shards, you won’t be able to take your characters to the end of the game. While paying for chromium packs or using crystals to open them is a way to get those shards, the random nature of it makes it nearly impossible to get a character to the max number of stars, 7 for now, unless you’re willing to spend a fortune.

With that being said here are the characters you should be looking to farm shards for as soon as possible.

Jedi Consular: You’re given the Jedi Consular at the beginning of the game and will continue to use him at max level as he’s one of the better healers available. If you go into his character screen and click find (below the number of shards you have), you’ll notice that he’s available in a wide variety of areas. This includes 4 light and dark side tiles as well as squad cantina battles. In other words getting the consular to seven stars is ideal.

Luminara Unduli: As the best and most available healer in the game Luminara Unduli should be your priority as soon as you unlock the Galactic War. All characters in the galactic war are readily available and easy to get 10 to 15 shards a day for. In addition to this, Luminara is available on 3 tiles within the Dark and Light side making her shards even easier to get. Get her to 7 stars as soon as possible and don’t look back.

Darth Sidious: Darth Sidious is available from redeeming arena tokens in the squad arena and is one of the best characters in the game as he can inflict healing immunity and do other nasty things to your opponent’s squad. Arena tokens are given based upon your leaderboard rank towards the end of

Arena tokens are given based upon your leaderboard rank towards the end of a SWGOH day cycle. If you’re able to get in the top 200, you’ll be able to get 700 of these tokens a day. As 5 shards cost 400 tokens, you can easily average 8 to 10 shards of Darth Sidious a day. At that pace, it should take you 8-9 days to unlock him, but it will be well worth the wait.

Qui-Gon Jinn: Qui Gon Jinn is a Jedi that’s only available in the Cantina Battle Store or from expensive data cards. His leader ability is ideal at the endgame as it grants other Jedis speed.

It’s easy to purchase around 5 shards of him a day at the Cantina Battle Store. Do this and you’ll unlock him within 5 days of unlocking the Squad cantina battles. Doing this for 10 days you’ll have him to 3 stars, 16 days to 4 stars, 29 days to 5 stars, and around 66 days in total to 7 stars.

Geonosian Soldier: While you’re working on Qui Gon Jinn, I highly recommend you work on the Geonosian Soldier. He’s one of the fastest and hardest hitting characters in the game and because he’s on the very first Squad Cantina Battle, he’s available while you still have an inexperienced squad. Squad cantina battles are available to do over and over again without a cap which makes his shards some of the easiest to get.

Other Good Characters: While, in my opinion, these are the first characters you should be aiming for there are some other really good options you can aim for in the beginning: Count Dooku, Poe Dameron, Poggle the Lesser, Captain Phasma Eeth Koth, and Old Daka are all good options for beginners to unlock. 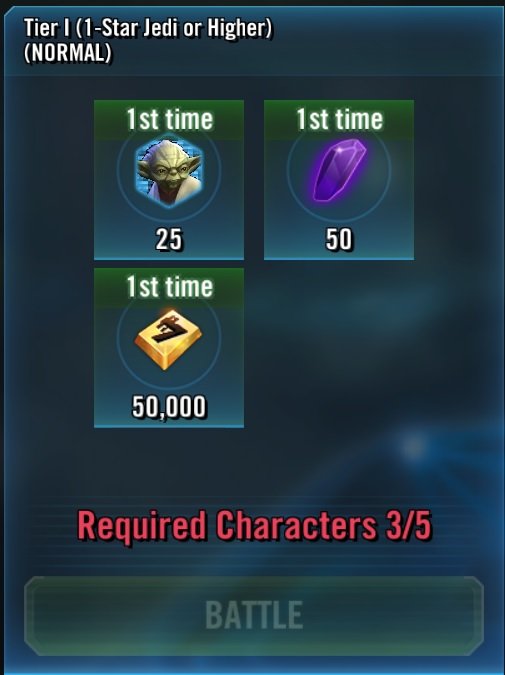 The Way of the Yoda:

For a more Jedi-centric team, you could also unlock Mace Windu and Ahsoka Tano or even the Jedi Knight Guardian if Mace is too hard. Having a crew of five Jedi will allow you to do the Jedi Event and eventually unlock Yoda, but you’ll have to decide whether that’s a priority at first or not. Jedi teams also tend to have very good synergy with Qui Gon Jinn, so keep that in mind.

Because it’s so easy to find these characters on tiles it may be worth your while to level these two characters a bit while you’re farming some other ones. For the end-game, they are both too slow in squad arena; however, I still find Chewbacca and Talia valuable for the Galactic War so don’t feel bad about pouring a little into them at first in order to keep up.

9. Use your Crystals for Energy

As I mentioned above, focusing on a few heroes is more important than collecting all of them. For that reason buying random chromium packs just isn’t worth it.

Unlike in other games, refilling energy in SWGOH is worth it. Since you’ll be gaining some crystals daily, use these to purchase 2 x standard energy refills as well as 1 x cantina energy. In addition to energy, you’ll be given timesaving Sim cash to go along with it.

After this, the purchase cost of crystals doubles for these refills. For those wanting to purchase additional crystals, I still feel like energy refills are the way to go (even at twice the price). 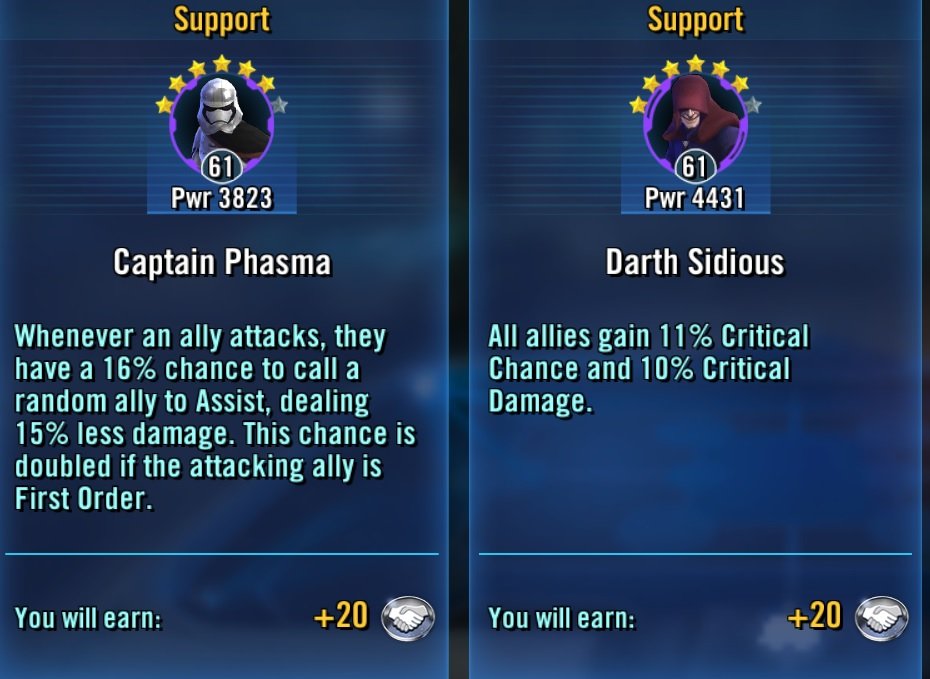 Allies are a huge part of the game and can get you through Light and Dark Side Battles you wouldn’t be able to handle otherwise. This is because they allow you to use a friends hero. That same hero can potentially be miles ahead of where any of your characters currently are. These allies can also be used in some daily event challenges.

To add allies simply go to the allies box, once it’s unlocked, and type in the right code. Want OP allies? Go to this forum thread and add high level players to your hearts content. Now you can use that experienced player’s 7 star Darth Sidious!

7. Don’t Level up All the Characters You Get

While it may seem like credits are plentiful at first they aren’t at the endgame. For this reason, it’s important not to get too trigger happy whenever you get a new character. Try and conserve your resources for your top 10 characters and most importantly for your top 5.

6. Use All of Your Energy

One of the things I love about SWGOH is that you get sim cash to simulate battles each day. In other words, it’s fairly easy to play SWGOH even when you don’t have time. So even if you don’t have time to play your hand at the arena or galactic war, sign in to reap some quick reward.

From the beginning of the game, go to the shipment area and purchase the gear for credits whenever possible. This will make your life a whole lot easier later on as many of this gear is difficult to get. As gear is a big part of what makes your squad strong, this will give you an edge up on the competition.

While your first goal with your time will be to use all of your energy, your second goal should be to finish your daily activities. There’s a ton of useful stuff you get just by completing them.

While you’re normally given two challenges a day to work on to better your squad, all the challenges are available on Sunday. Be there to complete them and get the gear, droids, credits, and ability mats you’ll need to make your squad strong.

2. Finish the Galactic War as Much as Possible

Patience is a virtue when it comes to the Galactic War but the rewards in this case are definitely worth it. Specifically War Tokens will allow you to purchase up to 15 shards a day of your favorite character. The credits, droids, and other items found within the war are also important.

Who you face in the Galactic War is calculated by using your top 5 characters as well as your highest squad arena rank. Keep that in mind before you begin.

1. Know When the Squad Arena Ends

By knowing when the Squad Arena ends you can make sure you reach the higher tier level of prize you’re looking for by facing the right opponents in the last second. For an easier Galactic War, consider staying within the upper ranks of the tier you’re in. If you’re just starting out, a good place to aim would be in the 170-190 range.

There’s a ton more to this game but this should get you started out on the right foot. If you’re wanting to spend money, make it a priority to get your cheaper energy refills each day. After that, look for bundles that are a good deal. Some are much better than others so have patience when looking! The initial $5 offering is usually a good place to start.