Today on the review table we have the Tek Syndicate Standard Issue gaming mouse. The popular Youtube technology channel chose an economical approach for their initial release into the hardware market. Even the name is economical, choosing to call their mouse The Standard Issue, a term often synonymous with the military for a weapon that is not only highly versatile and rugged but also suitable for use in nearly all acts of engagement. Let’s see if this $35 entry can shake up the hardware market.

There are so many factors that come into play when a gamer chooses their mouse. Hand size and comfort are largely subjective things, but getting the right sensor and switches are paramount in my opinion. The Tek crew have chosen wisely with the Pixart 3310 optical sensor which sports 0 acceleration. The 3310 is a popular sensor that you will often see in a lot of high-end gaming mice for double the price like the Mionix Castor, my daily driver.

This is a sensor I’m familiar with. I use it every day and in more than one good gaming mouse so I’m no stranger to how accurate it is. That has not changed here and one can expect stunning accuracy as a result of it. You can also make DPI adjustments on the fly from 1,000-5,000 in increments of 1K using the toggle switches behind the scroll wheel.

The switches here are also of a pro-grade quality in the infamous Omron switches. Rated at 20,000,000 click life cycle, they have become the gold standard of gaming mice leading to responsive and satisfying clicks. Fighting my way through 10 waves of the walking dead via Killing Floor 2, live over on Hitbox was a great test for me pounding the left mouse button in a highly abusive fashion.

I’m also happy to report that the walkers heads were popping like watermelons without the need to iron sight thanks to the accuracy on that 3310 optical sensor ;). 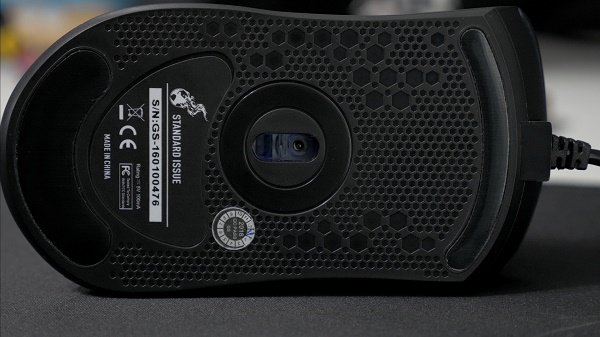 The simple shell, which is from a pre-existing mold, was utilized to keep costs down for the consumer. It’s covered with a rubberized coating that has become popular in recent years and it’s definitely something I’m a fan of. The same coating continues on the sides of the mouse that have some texture for additional grip. I would like to see the addition of a dedicated rubber grip along the thumb rest though in future iterations. I think this would help as I sometimes found my hand slipping when I had to lift the mouse off the desk.

The underside has Teflon feet at the front and back to ensure smooth gliding. I had initially thought the front Teflon was not as smooth, but later noticed it had a thin film over it which needed to be removed. I actually used the mouse for several days like this before a viewer mentioned it in the comments of my video review on the mouse.

The Tek Syndicate mouse is also on the larger side for mice at 129mm in total length with the body weighing 125 grams. For comparison, my Mionix Castor is 93 grams and 122mm in length. So this is something to consider if you have a small or large hands and you think the size and weight could be a problem for you.

Speaking for myself with medium to small hands, I leaned towards the Castor as I use a hybrid of a palm and fingertip grip that is somewhat uncommon.

Palm vs. Claw vs. Fingertip Grip for Gaming

There are 8 physical buttons on the mouse, two of which are used for adjusting DPI/CPI and a sniper button on the side of the mouse which will bring you down to 500 DPI for as long as it’s held. The idea being that a player will have more control when scoping in for a sweet headshot. It is placed far enough forward so as to avoid players pressing it accidentally. For my grip, it was so far that using it became more of a chore so I ended up not using it.

In addition to our standard left, right and middle mouse clicks we have to buttons on the side that can be programmed in many games or just navigating web pages. The back thumb button is quite pronounced in a good position. I found myself using this quite frequently to go back on web pages.

It is much appreciated that a rubber cable was chosen here over the use of a braided one. I recently did a very in-depth video covering the analysis and problems brought on by braided cables. Braiding adds additional weight to the cable and stiffness which in the minds of many professional gamers is a bad thing.

With a rubber cable like on the Tek mouse you get better flexibility so you don’t have to worry about your cable getting caught on your monitor stand. This is something that happens to me CONSTANTLY on braided cables. So much to the point that I have begun to unbraid mice like my Logitech G502.

One of my biggest complaints on gaming mice is the scroll wheel. Very often I find the clicks to be far too heavy. That was not the case here as I had no issues using my middle mouse. I typically will map something here that I need to use in games a lot, so it’s important that I actually can use the button. If I had to compare the wheel to anything, it would be my old Deathadder. Similar size and feel when scrolling or clicking.

I did find initially that page scrolling was slower than what I had become accustomed to on the Castor which I customized in their software. The Tek Syndicate mouse actually ships with no software, but that’s okay because I just adjusted it in the Windows options. It actually made me appreciate the fact that we really don’t need all this extra snake oil being packaged in with mice that use similar hardware of the Tek mouse but cost double the price.

Conclusion: How does it stack up against the Mionix Castor?

The Tek Syndicate mouse is an extremely impressive budget gaming mouse. Not because it has introduced a new technology or feature that drives gamers mad, but because they sat down and really looked at mice and said, what’s important? What do we need to keep so we don’t sacrifice performance, but also can keep manufacturing costs down? Lastly, they passed all of that savings on to the consumer which is RARE these days.

Now I’m not going to tell you that this mouse is above and beyond the Castor or other mice like it because in a lot of areas it just isn’t. It does, however, rock the same sensor and quality switches so you get the performance. Just know that you are getting a pre-existing mold and there are a few edges that will hopefully be polished for a gen 2.

All that being said, though, I don’t think you will find a better mouse on the Internet for under $50, let alone the asking price of $35 which is not that far from cost. Certainly, a commendable effort and I look forward to the next piece of hardware they release into the market after seeing what they could do on their first run.