Today we are going to be taking a look at what I consider to be the best Keyboard & Mouse combo for gamers in the year 2017. When it comes to gaming peripherals, the minimalist approach is one that I’m a big fan of as you guys may have seen in the past with my mouse and keyboard setups. So to that end, we’ll be taking a close look at the Logitech G-Pro keyboard and mouse.

The keyboard was provided out to me by Logitech for review, but the mouse I actually purchased myself a few months ago after having used the G303 for the better part of 2016. It was a very minor change going from the g303 to the G-Pro mouse, but it’s one I’m happy that I made.

Both mice use the Pixart 3366 sensor so you’re getting excellent precision in a tried and tested optical sensor that is found in almost every mouse from Logitech these days. I mostly play shooters on the PC like Rainbow Six Siege, Overwatch and more recently Playerunknown’s Battlegrounds. I can say with confidence that you shouldn’t have any issues with accuracy in shooters using this mouse at least from the hardware itself. When I lose a gunfight, I feel like it was me that lost the gunfight, and not because I was impeded by the hardware I was using. 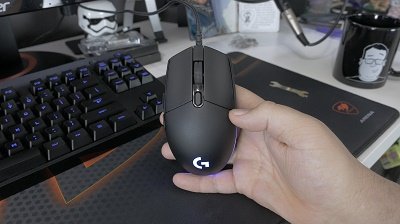 I didn’t notice any lens rattle when doing a test in paint.net as you’ll be seeing that result on your screen now and that’s really what we’ve come to expect from the Pixart 3366 so really no surprises here.

The sensor itself is surrounded by a Teflon ring in addition to four more small feet at the corners of the mouse. After 3 months of daily use, there has been no peeling or significant degradation of the feet and they glide across my mouse pad with great ease.

The g-pro has a total of six buttons; the left and right mouse click are Omron switches. In addition to those we also have your middle mouse, dpi adjust button and forward and back buttons on the side of the mouse. Despite having smaller hands I didn’t have any issue reaching the forward button on here. 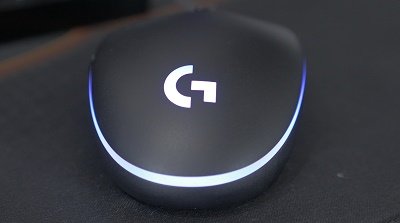 At just 115mm long it is certainly on the smaller side, but that is something I prefer in a good shooter mouse as I use a hybrid of a claw and fingertip grip. Other dimensions worth noting are that it’s 62mm wide, 38mm tall and has a weight of 83 grams. This should tell you that if you have bigger hands and lean towards a palm grip than it may not suit your hand, but it’s absolutely perfect for my needs and others that use a claw or fingertip grip.

Despite being on the lighter side the Logitech G-Pro does not feel cheap or flimsy. If I pick up the mouse and shake it around there is no rattling sounds or squeaking and setting the mouse down on the desk doesn’t have any alarming sounds of movement either. It’s just a solid, lightweight mouse built for competitive shooters.

Lastly, you also have RGB lighting control for the letter “G” on the mouse and a ring that sits underneath your wrist. You can set your lighting profile and make adjustments in the Logitech gaming software which can also be used for the g-pro keyboard we will be moving into now which also has full RGB support if you’re into that sort of thing. I chose to set my colors to just solid purple which helps illuminate my keys in the dark without being too glaring as to distract me. 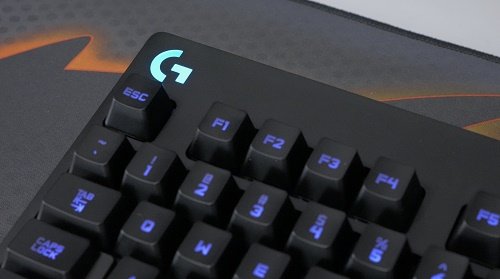 One thing I did want to note on the lighting with the keyboard was the letter “G” in the top left corner. You can change the color of this along with every other key individually, but for whatever reason, the big G requires you to keep the Logitech software open for your custom lighting to be applied. So if you don’t want to have the software open all the time in the background you will be limited to having the G set to default Logitech blue unless you keep the software open. This probably won’t be a huge issue for most people, but as someone that like to minimize the number of startup programs in Windows, this was something that bothered me enough to mention it to you.

You can also disable all lighting any time you want with a physical button on the top right of the keyboard. Next to that is a gaming mode toggle which will disable the Windows key that can get in the way for some when gaming. Both of these buttons work as intended and I have no complaints about them, actually, I love the fact that these functions have their dedicated physical buttons.

To the left of those, we have Caps Lock and Scroll Lock indicators that illuminate white LED’s when activated. You may notice there is no Num Lock light and that’s because this is a tenkeyless keyboard which is my personal preference as I find them to be more ergonomic and also reduce the footprint on your desk for the keyboard. Also, I’m not an accountant so I don’t really need a Numpad. If you, however, do require the use of a Numpad, Logitech makes their G810 keyboard which is virtually identical to the G-Pro, but with the addition of having a Numpad.

The backplate behind the keys is a matte black finish that’s smooth to the touch and feels great. I love the material and finish they opted to use here on the keyboard and the keys themselves. It definitely gives a premium and modern feel to the keyboard overall.

The only thing I wish is that Logitech used this finish on the entire keyboard as the sides of it have a glossy finish that can attract fingerprints rather easily. However, this is really only something I noticed when first unboxing the keyboard as during normal use I never had to look at it or interact with the sides of the keyboard in any way.

The back of the keyboard has a slanted pattern and 5 massive rubber feet to keep the g-pro in place on your desk. We also have two feet back here with rubberized bottoms so even if you choose to raise the keyboard up it should still prevent slippage. The feet can be raised in two separate pieces, one allowing for a 4-degree angle and the larger one an 8-degree angle.

The G-Pro keyboard also has a removable cable which will be good if you plan to travel with the keyboard for e-sports events or LAN parties. It uses a micro USB connector that is supported by a winged design that should prevent the cable from wiggling or being knocked out easily and damaged over time. And the cable here is a sleeved cable just like on the g-pro mouse.

The switches used here are Logitech’s Romer G-switch that I haven’t had the chance to use until I came across this keyboard. I’m glad that I did. It wasn’t a massive change either for me going from using Cherry MX browns as the switch feels very similar to that. Requiring the same 45 grams of actuation force and also giving tactile feedback when pressed. The big difference is that it only requires 1.5mm before actuation while a cherry switch needs 2mm so that makes it just a bit faster for gamers.

I actually did a full interview talking with Mark from the Logitech Team when I was at PAX East last month about these switches and the benefits they offer gamers, I’ll be sure to add in a card here if you want to check that video out.

In the video below, you can find a quick sound test of the Romer G-switches compared to the Cherry MX browns on my former daily use keyboard from WASD.

But there you have it guys, the G-pro keyboard, and mouse from Logitech which are now my daily drivers for gaming peripherals and are definitely recommended as a top gaming keyboard and mouse combination. Outside of the couple of aesthetic things that bothered me with the keyboard, I find both of these products to be near perfect for what I personally look for in a gaming mouse & keyboard. Which is essentially a minimal design that doesn’t skimp on quality in the areas that are important.

The keyboard is one of the most solid ones I’ve used having zero flex when trying to bend it around, not something I can say for all keyboards at the price point of $129. The mouse is available on Amazon for under $60 at the time of me recording this which is very reasonable for what you’re getting so I have no issues recommending either of these products to anyone that was interested in them so hopefully this video made your buying decision a little bit easier as I can confidently give them both my full endorsement for what that’s worth.