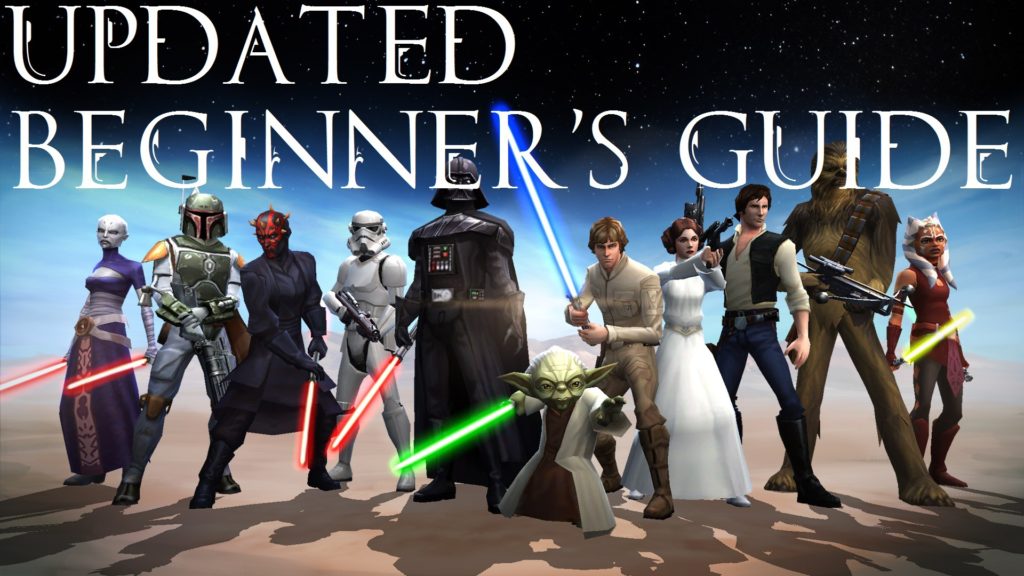 I’ve been playing Star Wars Galaxy of Heroes since January and it’s been a lot of fun. At the time I started various guides were available that made it easy as a new player to get started. Since that time, the game has evolved to where I felt like many of the old guides were lacking. For that reason,  I decided to make this guide. If you’re just getting started, this should help you rank high in arena each day and compete regularly with people who even put substantial amounts of money into the game.

Before I get into which characters you should farm and how you should develop your strategy it’s important to realize that a lot of crystals are available to you at the beginning of the game if you do it right.

Signing in with a Samsung Phone or the Bluestacks program on your PC will give you the Samsung Data pack. This gives you 3 vader shards, 5 snowtrooper shards, 5 royal guard shards, 400 crystals, 75,000 gold, and IG-86.

Welcome rewards give you 200 crystals and 2 Vader shards. This is available to everyone.

Connecting the app to facebook should give you an additional 200 crystals.

Areas of the Game

Light and Dark Side Battles

Light side battles open first and are a bit easier because of the abundance of light side characters you’ll get. For both light and dark side battles there are also hard mode battles for the various stages. These give you shards. For each hard mode tile you get 3 chances a day to get a character shard. At the beginning of the game you’ll want to “hard node farm” these characters as they become available. Once they are complete, you can work on other characters you’d like to work on.

You should try to get Jedi Consular to around 5 stars as he’ll help you complete galactic war every day. As he’s relatively useless in other facets of the game there’s no need to get him up to 7 stars right away.

You’ll be farming Rey in Guild shipments and on hard nodes at the beginning of the game as she’s the best DPS character in the game. Don’t stop hard node farming her until she’s 7 stars.

Royal Guard will be very difficult to farm up at first but you should get started right away. Farm his nodes as they become available. Once you get to 7-c on Cantina battles you can also farm him there. That being said he’s useful even with few stars at the beginning of the game.

Ewok Elder is extremely useful in the Rancor raid, has a lot of flexibility and can be farmed in hard nodes and guild shipments. He’s worth focusing on once you can.

Old Daka is useful in squad arena, Dark side battles, and galactic war because of her stun (so far she’s useless in raids). If you start farming her when her node becomes available, you’ll shorten the long farm in Cantina Battle Shipments.

Fives is another useful character because of his speed down, assist attack, and counter. Like Daka he’s only available in the Cantina Battle shipments. Since you’ll be farming Qui-Gon Jin first, you can get started a little early on fives in his hard nodes.

Allies are available to you very early on in the game. If you go on to the official EA forums there’s a running thread of people posting their ally codes. Getting strong allies will allow you to easily defeat any light and dark side battles you’re having an issue with at the beginning of the game.

Shipments is the first area available to you in the game. While character shards are largely overpriced to the beginning player the equipment at the bottom will prove quite useful in gearing up your characters. Buy what you need but make sure you purchase at least 3 pieces of gear from the bottom each day in order to claim your daily activities prizes.

Having a good squad arena team is the first thing you want to focus on as it presents the rewards you need most (crystals) at the beginning of the game. Crystals are important as they’ll allow you to do more energy, cantina, and arena refreshes in order to gain levels more quickly. Gaining levels more quickly will allow you to access other areas of the game more quickly and give you an advantage with higher level and gear leveled characters. Most effective squads have a good squad leader, several DPS characters, and a tank.

A new server is created for every 20,000 people that join. With luck, you’ll be among the first few people and start at a low arena rank. Restarting the next day if your rank is extremely high is not a terrible idea.

The first few days you’ll need to refresh your squad arena twice so you can fight 15 squad arena battles to move up in the rankings. Later on, you’ll still want to refresh this once a day. The increase in crystals you’ll get from doing this will set the pace you need to succeed in every other facet of the game.

Every squad has a leader with the most effective and easiest to acquire being evasion leads like Dooku and Old Ben. Other leads like Rex and HK 47 can also be effective.

Damage is important as it gives you the ability to take out the opponents most important threats right away. At first, you’ll be farming Leia, Rey, Qui-Gon Jin, and Geonosian Soldier. I’d pick three of these to go along with your Squad leader who will give them evasion and Tank who will protect them.

The best tank in the game is Royal Guard right now. As I mentioned above it’ll be a long farm but you’ll want to start immediately on his hard node farms and hope to get additional shards for him in bronzium packs.

Another good alternative tank would be Stormtrooper Han. He can work very well with Old Ben as Lead as Old Ben ability blocks and removes the opponents ability to take away Han’s Taunt and ultimately giving you massive turn meter. Stormtrooper Han can be a bit squishy at the beginning of the game so he’s ultimately someone I’d recommend more for end game play at high gear levels.

Completing challenges every day will give you access to loads of gear, gold, training droids, and allow you to complete your daily activities bonus. Be sure to take a look at the Guild Schedule as you’ll want to save your Thursday morning dailies for Thursday evening in order to maximize the guild coins you can achieve. Sunday is an especially important day as every daily challenge is available on that day.

Events can offer you gold, shards, crystals, and even the opportunity to get Master Yoda. At the beginning you should complete these as you can and not focus on them simply for an event. Even Master Yoda can be a trap character if farmed to early.

Guild provide major resources for allowing you to level up quickly, get character shards, and endgame gear. You’ll want to join the best guild possible in order to achieve the highest rewards. Guild raids are done in tiers with 1 being the lowest and 7 being the highest. Within each raid you can only use characters with stars high enough to match their tier level. For example a Tier 5 raid allows you to use only your characters with 5 stars.

Even if you’re dead last in your guild it’s a good idea to join a good guild early. They likely won’t have an issue defeating the Rancor and won’t mind a member of their guild that isn’t trying to compete for the top spot. 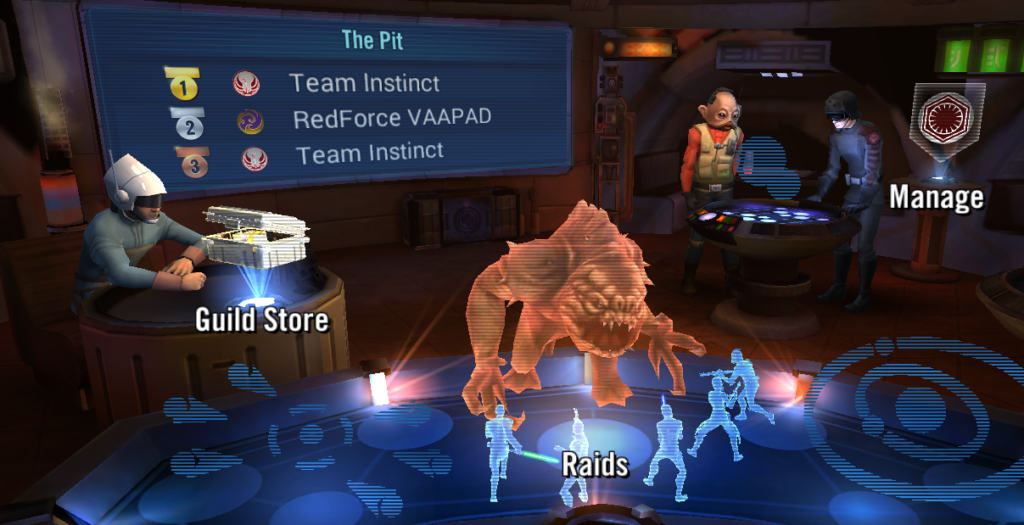 If you join a good guild at the beginning of the game like I recommended, you’ll likely have difficulty in whatever raid they choose. Still, you’ll want to focus on one good raid squad like Phasma, Qui-Gon Jin, Rey, Geonosian Soldieer or Rey, and Admiral Ackbar. This is a good team for the Rancor in Phase 1 that when maxed can do over 500k damage in the first phase without taking an incredibly long time to farm up. The best teams for phase 1 will include a Maxed Teebo, Ewok Elder or Rex (Pay only character), Qui-Gon Jin, Rey, and Geonosian Soldier. That being said you should focus on characters that are good in squad arena and raids and avoid long farms like Teebo at first.

Along with defeating the Rancor each day and ranking in your daily guild activity (see the schedule here) you receive guild tokens. As you won’t be able to use the endgame gear til around level 74 it’s a good idea to farm characters like Rey and Ewok Elder from here at first and then as you get them in abundance grab gear that your squad team will need once they hit level 74.

At first you’ll want to farm the very first node in cantina shipments to acquire Geonosian Soldier. He’s a great DPS character that’s easy to level up. Once node 2-F is available, you’ll likely want to switch to farm old Ben as he’s going to be the leader of your arena team early on. Once you’ve finished with him you can go back to farming Geonosian Soldier.

Cantina Battle Store Credits will give you around 5 shards a day of the character of your choosing. You’ll want to farm Qui-Gon Jin first, then Old Daka, then Fives. From there, you can experiment with whoever is left.

Galactic War is the #1 source for gold in Star Wars Galaxy of Heroes. It also gives you access to a number of characters in the galactic war shipments as well as ability mats. In order to defeat galactic war every day you’ll need to be somewhat savvy about your team going through the various stages (much less so now than before). In order to finish it every day, be sure that important characters don’t go down to bad RNG.

Here is the order of characters you should farm in Galactic War:

Luminara’s heal is the best you’ll have access to in the early parts of the game. Get her to 4 or 5 stars (at least) before starting on Captain Phasma.

Captain Phasma can be used in all facets of the game. She’s especially useful in the Rancor raid because of her speed down, turn meter up, and defense down abilities. This allows you to get in more turns. She’s also easy to level up from the beginning of the game all the way to the end because her gear is easy to acquire.

IG 86 is fairly easy to gear up, has a strong assist, and does a ton of damage. He’s very useful for a droid squad in arena or just a damage dealer. Still, there are other DPS characters you’ll likely choose to use in your first arena squad.

Before you farm Teebo it’s important to know that he can be a character trap for many. A Gear level 10 teebo with a scanner can be your most important commodity against phase 1 of the rancor raid because of his turn meter reduction. That being said he’s incredibly difficult to gear up so be sure to know beforehand that he’ll be rather useless clear up until that time and we’ll likely have other raids by then.

The most important thing is to farm everything you can each day and everything will fall in line. Also, just because a whale player gets ahead of you doesn’t mean you won’t eventually catch up. If you farm as I mentioned above, you’re likely to stay near the top of your server each day. Keep in mind that characters like Yoda and Teebo are good but can be potential traps because of the length of time it takes to farm them.