Should You Upgrade an Old Ivy Bridge Computer or Go with Skylake?

With the excitement of wanting to be on the latest and greatest PC hardware, it can often be forgotten that you could find some good parts from a generation or two ago that can still hold their own in modern titles. Better yet if you look into the used market online, there are always a lot of great deals waiting to be found.

Today I’ll be walking you through the parts set and performance of my old gaming rig to illustrate what you can still do in modern games at 1080 and 1440. I’ll also show what a Skylake build, similar in performance, should set you back. Ultimately, you’ll have to decide whether to upgrade that old rig, build a new rig using older parts, or move on to the next generation.

Does Ivy Bridge Hold Up vs Skylake?

The Z77 line from Intel has been one of the best chipsets of the last few generations. With Sandy and Ivy Bridge being relatively affordable it made it so that most PC gamers could have a quad-core with fast single-threaded performance that helps not only in games, but also with content production.

On that Ivy Bridge series, the i5 3570k, as low as $130 used, was very enticing when it launched and still has great overclocking potential today. In fact, when comparing with i5 CPU’s from the latest generation Skylake, Instruction Per Clock (IPC) gains have been less than 10% over the course of three generations combined, so you really aren’t missing out on much by not going with Intel’s latest processor. The Skylake benchmark results show even less of an improvement for gaming.

My i5-3570k is being held in the MSI Z77 MPower motherboard which was an amazing value when it released at $199. One of its best features is the OC Genie which if you’re a new builder, could save you a lot of the worry that goes into overclocking your CPU. With the push of a button, it instantly takes the 3570k to 4.2GHZ.

A comparable skylake motherboard in the same price range would be the MSI Z170A gaming M7.

Lastly, my old rig has 16GB of DDR3 RAM, specifically the Corsair Vengeance 1866MHz kit. With the prices of DDR3 coming down so low in 2016, there isn’t much reason to get less than 16GB and that really is the perfect amount if not more than enough for most gaming, however if you do have a more professional workflow and you know that you’ll need the memory then you always have the option to upgrade. 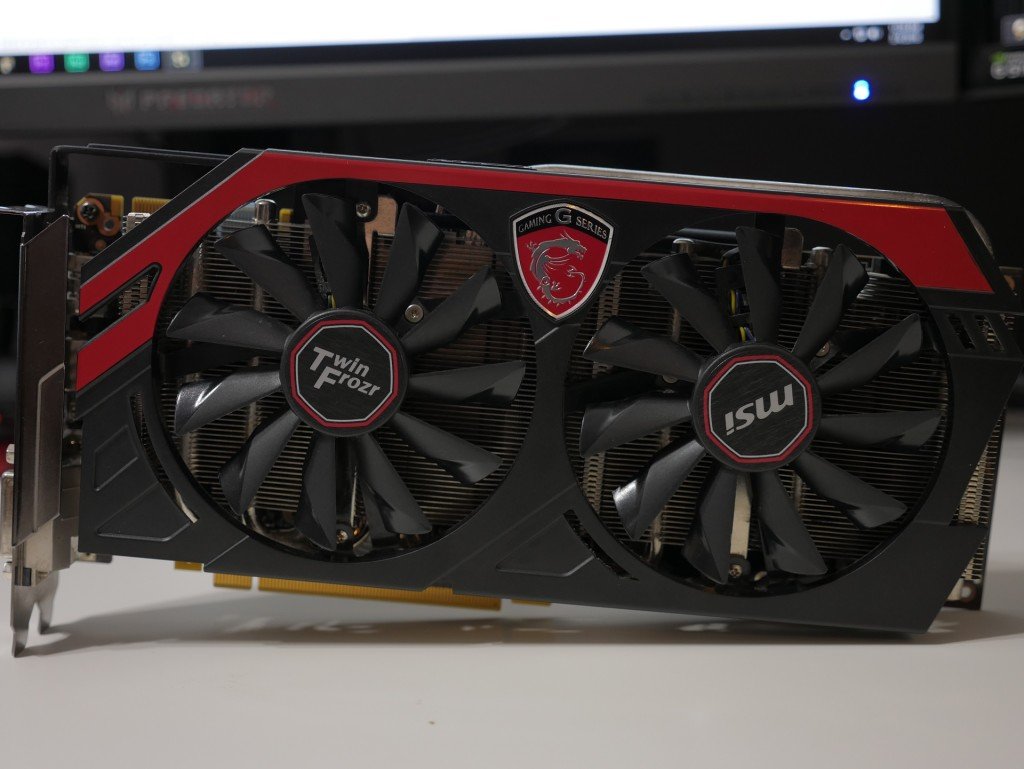 If you’ve got an older graphics card or even a 770 that you might be looking to upgrade, there’s a couple of good options in the $300 price point that perform really well. You could go with a brand new 970, upgrade to a new ($300) or used ($200 to $250) GTX 780. Or you could simply purchase a similar GPU to what you have currently to use in Crosffire or SLI.

I upgraded to two graphics cards here in the MSI GTX 780’s which is definitely an option you could go with vs a 970. Seeing as you would be saving money on older generation hardware, putting some of that reduced cost into an extra graphics card is a great way to get additional gaming performance.

For the purposes of testing, I did a benchmark with the single 780 and both in SLI. I’ve also included the GTX 970 here in my testing to show the comparison to a newer card that costs around $100 more. 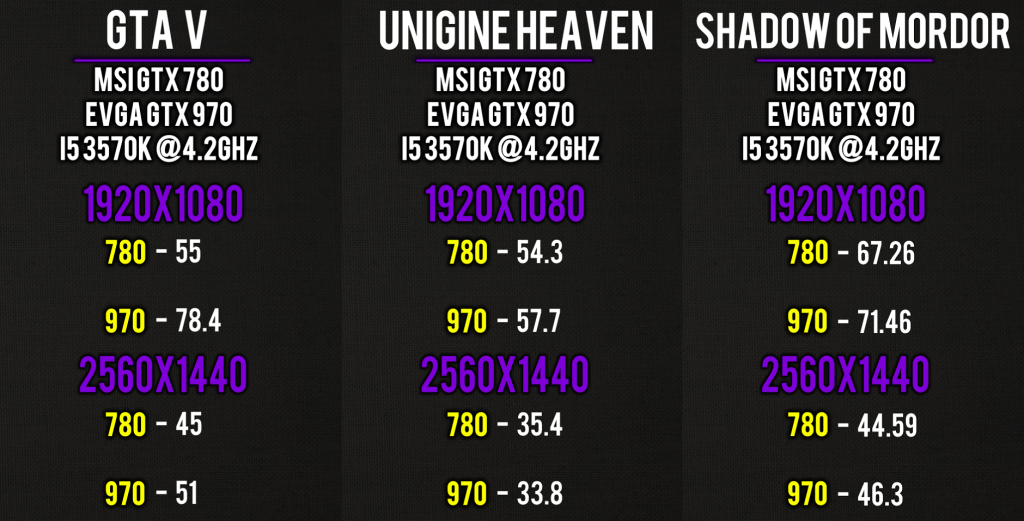 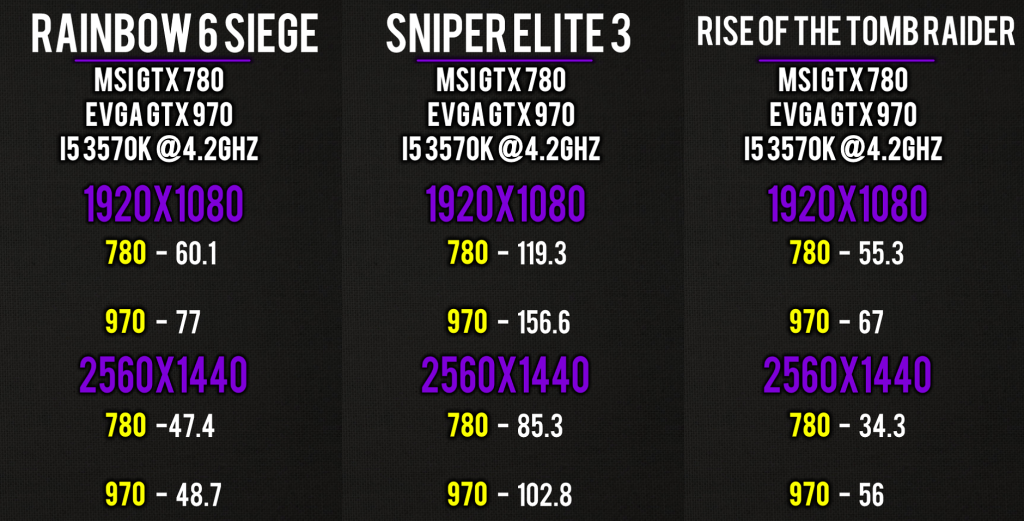 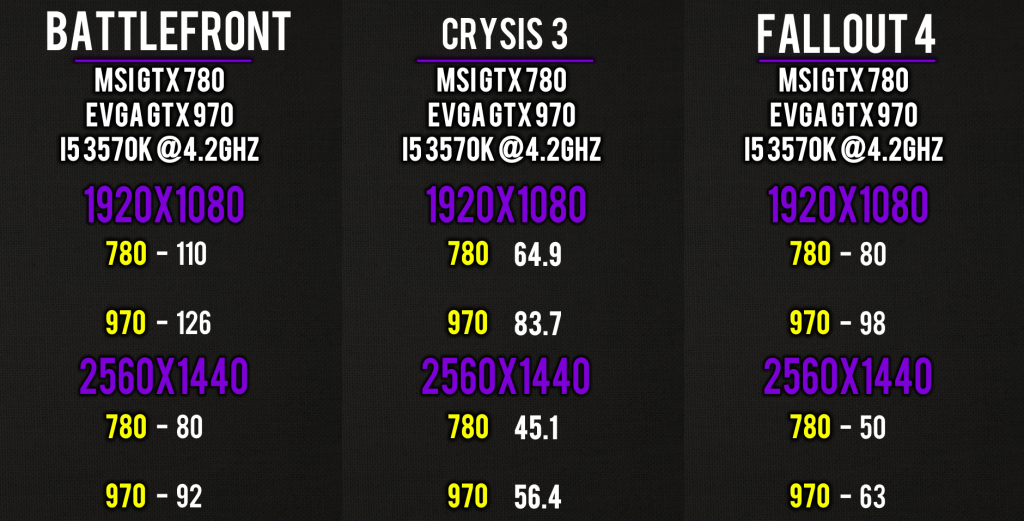 As you can see some really stellar performance on the 780, holding its own in 1080p against the much newer and pricier GTX 970. It no doubt that the 970 wins this showdown, but when you factor in price to performance and the possibility of throwing in an extra GTX 780 for a little more than the price of the one 970, then it starts looking like a really good idea to consider. This is especially true if you are considering 1440p gaming, the two 780’s would be my route of choice, hands down. I didn’t see a significant enough restriction their on video memory of the GTX 780’s even in more VRAM intensive titles like Shadow of Mordor. 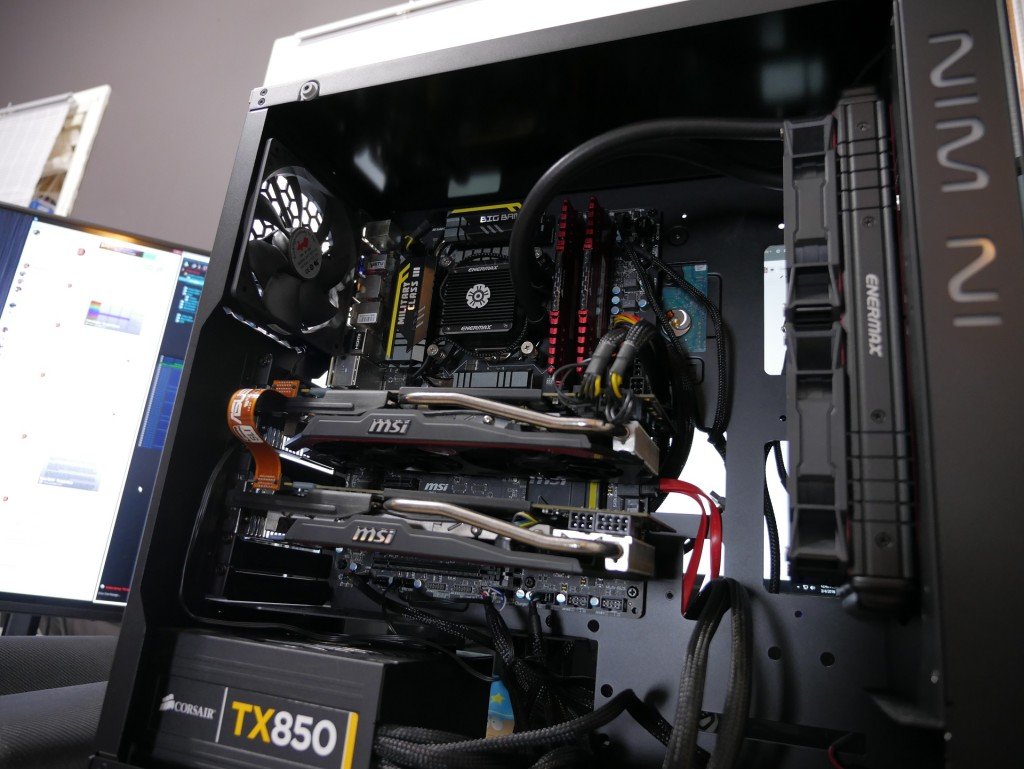 A new case goes a long way in upgrading an old PC. The case I have on hand is actually a real stunner in the InWin 805 and when it comes to the case, obviously go with what suits your style or budget. But, if that style happens to be a gorgeous box made of tempered glass and aluminum, then the 805 does not disappoint.

The 805 was great working in as well. Sometimes with these fancy design cases, the actual functionality is forgotten or compromised, but that was not the case here… pun not intended.

My old stand by for Storage is the Samsung 800 series so pick the biggest size you can afford and throw it in here for your operating system and favorite games. The one on hand here is the 840 Pro, but the 850 EVO or Pro models would work just as well. Lastly for power, I’ve gone with the Corsair TX 850 because it’s more than enough juice for SLI and Corsair has not let me down yet in the power supply department.

I hope this shows you what kind of performance you can get on some older hardware so if you are thinking about upgrading you can now know where you stand a little better or maybe you just need to save a few bucks and get some good game performance, either way, I’m sure this build would satisfy any gaming need.