The two biggest questions for the X7 are not only whether the $400 price tag is justified, it’s whether or not enough audiophiles can afford to make its existence worthwhile for Creative. Only time will tell for its existence. As to whether or not it’s worth it, I’ll take a close look at it’s features and give you my thoughts.

I want to start with the connectivity features of the X7 as they give it the most value. If you don’t need this plethora of features, the X7 probably doesn’t make sense for you. However,  if you can make use of these as well as other features of the device, you’ll have a quality option for audio and be able to free up some shelf space. 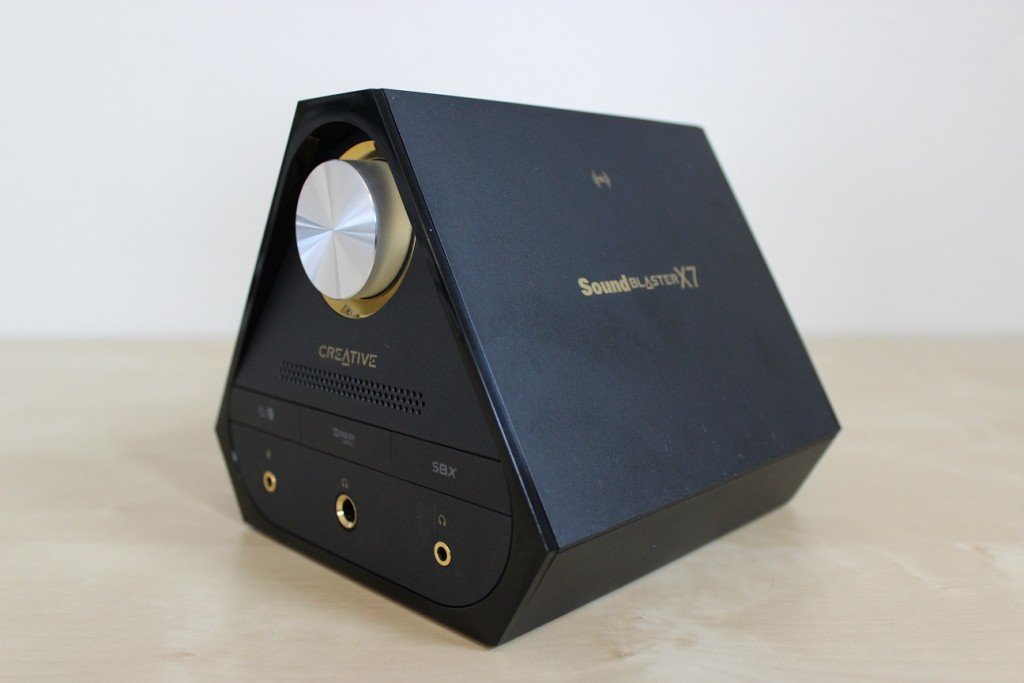 Bluetooth and NFC: The X7 has Creative Multipoint for up to two simultaneous Bluetooth connections and carries NFC pairing for tap and play with NFC enabled devices. With aptX low latency, this allows you to watch movies from your portable device without having to worry about the audio sync.

USB 2.0 Host: In addition to Bluetooth iOS devices using the Lightning connector and Android devices can connect directly to the USB host on the side of the Sound Blaster X7. An alternate way would connect directly through a 3.5mm cable.

USB Connection to PC and MAC: The Sound Blaster X7 can be connected to your computer via USB and used along with Creative’s software suite.

As you can see in the picture there are several other ways to connect the X7 to just about anything you want to use. These include the line-level input through RCA connectors, Optical S/PDIF-Out and In, and connections for your passive bookshelf or tower speakers. The X7 also has a Mic-In Jack as well as a 3.5 and 6.3mm headphone jack. 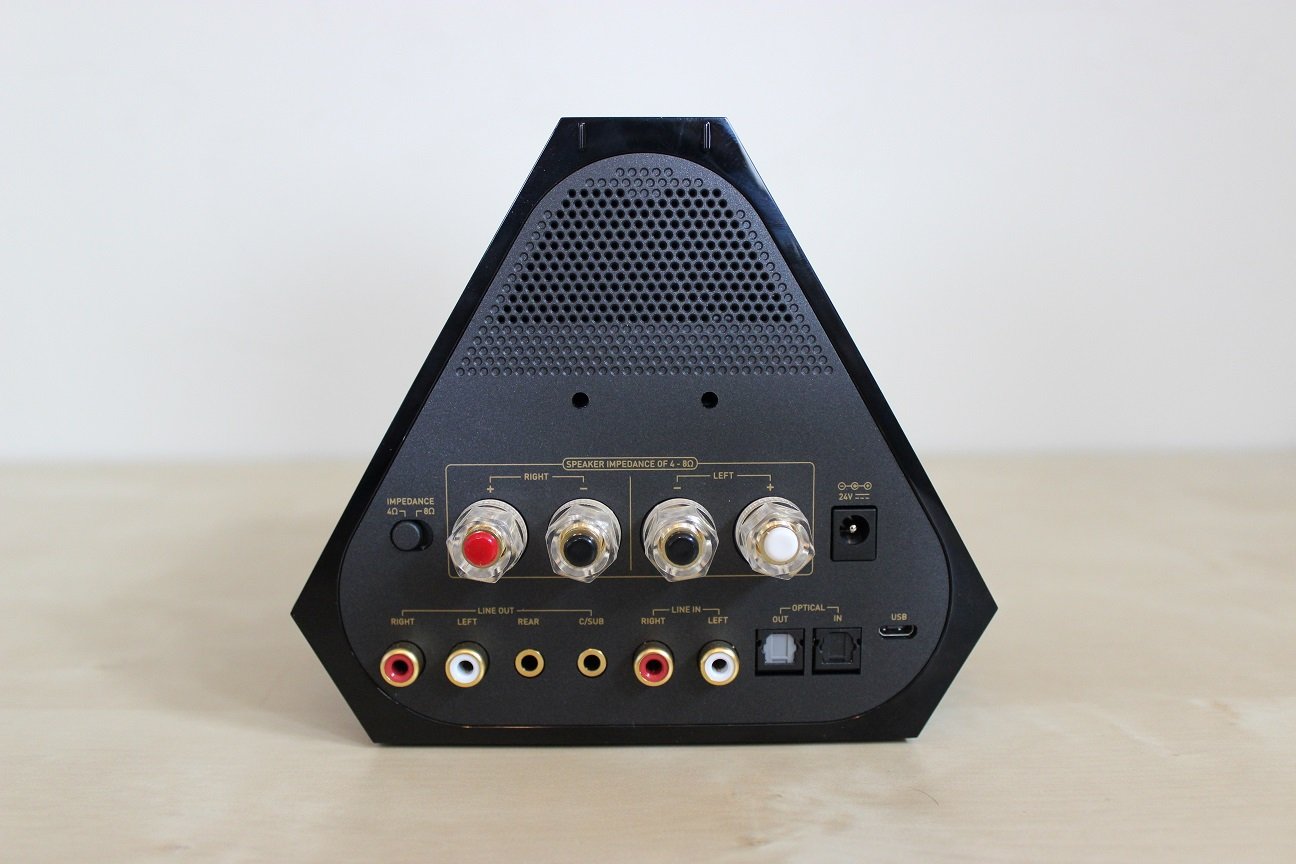 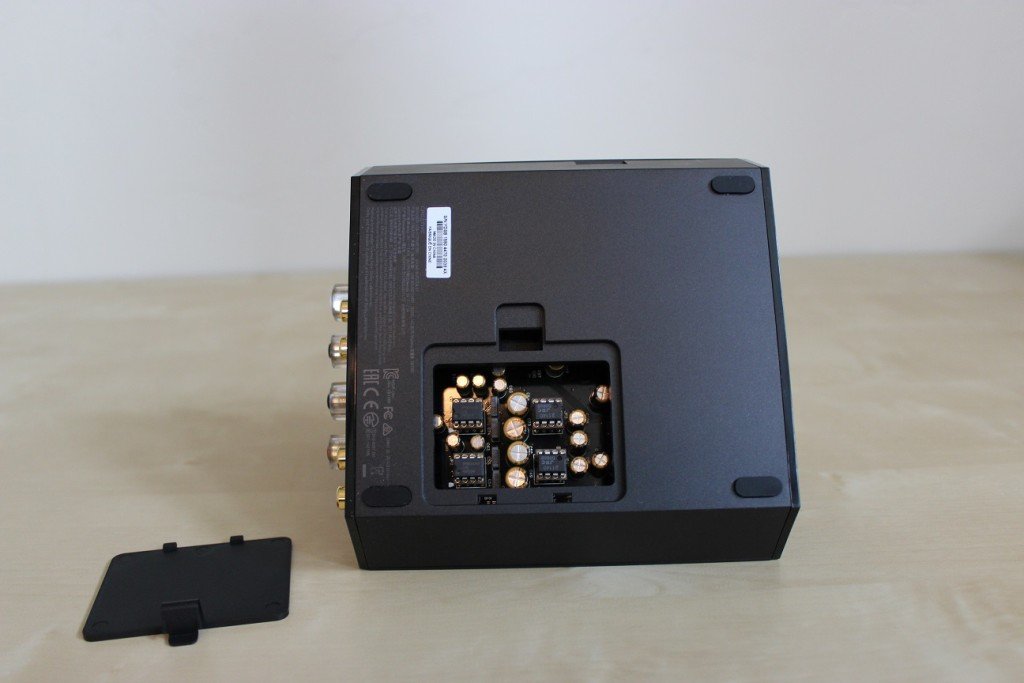 The modern design, profile, and look of the X7 are no doubt one of its best attributes. Combine this with all of its intended uses and you can see why it was a double CES 2015 innovations honoree.

It’s really neat that Creative built the doorway on the bottom of the X7 into their design. Want to use one of your favorite op-amps? Simply swap it out.

The front panel of the X7 features dual beam forming mics that suppress noise and pick up your voice while you talk. While I doubt anyone will be using this for gaming it could be useful for taking calls while at your PC or talking on skype. It’s also convenient  for while you’re listening to music on your mobile device.

This rest works with most headphones but might be frustrating for those of you wanting to use it for your high-end and heavy headphones. It won’t be sturdy enough for some but can be easily removed. 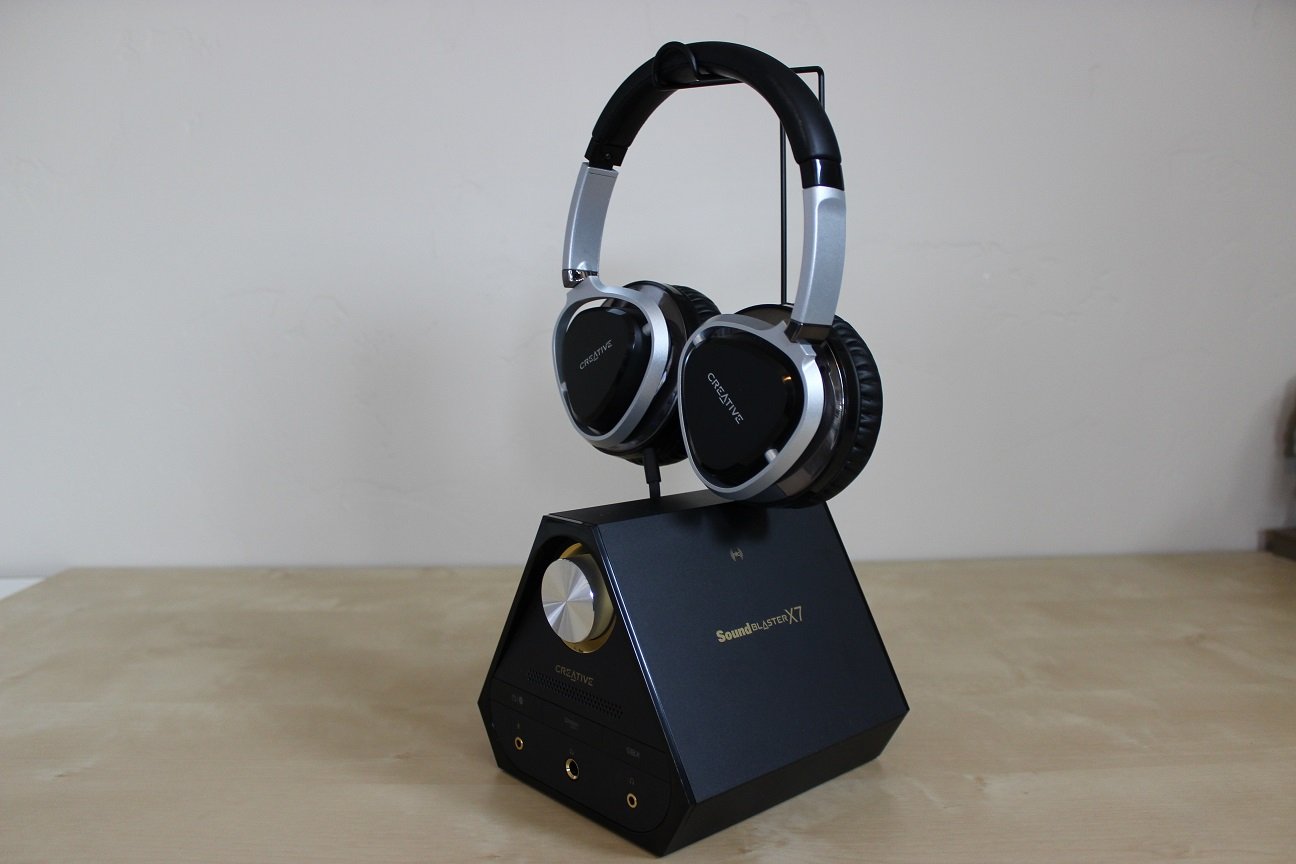 The X7 uses a Burr-Brown PCM1794 127dB DAC to support higher resolution audio playback at up to 24-bit 192kHz. It also has a Dolby Digital decoder for up to 5.1 channel playback. For most audiophiles, this will feel like a mid to upper range DAC overall.

Good enough for most but not everyone. That being said even some of the pickiest of audiophiles may consider the convenience of all its connectivity options a good tradeoff vs their higher-end Yulong or other DAC solution.

The X7 class-D digital amplifier (TPA3116D2)  delivers up to 100W power to allow you to connect to your favorite passive bookshelf or tower speakers. I found this to be especially useful when combined with its Bluetooth features. There are some limitations on this capacity including having the proper power cord (24V 6A0 to run it at high capacity). Here’s how Creative has it listed on their website:

The X7 also uses the Texas Instruments TPA6120A2 600Ω headphone amplifier for use with higher-end headphones.

The X7 comes with both a control app for your tablets and phone and software for your computer. I found this especially useful for gaming which included presets and Scout mode. There’s also value here for music lovers and movie watchers who will enjoy the presets and various options. These include presets, SBX Pro Studio, cinematic options, an equalizer, and more.

I used Creative’s T4 speakers to test out the Sound Blaster X7 with an optical connection from the X7 to the T4 and a USB connection to my PC. It was good to have speakers that allowed me to hook an optical connection into my PC directly and compare that with what I could hear while using the X7. I must say that even without the X7 the T4s sound really nice in this way. For some with a similar solution, it may not be worth the cost.

That being said those who are spending $400 on a DAC AMP wireless solution probably know what they are getting here. With the X7 detail was significantly improved while listening to music, watching movies, and playing games. All the fine tuning and adjustments also allowed me to customize the audio to my personal taste.

For my powered speaker solution, the AMP didn’t really feel that necessary. Those with passive speakers will certainly find more value here. In addition, the speakers I was using already had a built-in Bluetooth solution. More than likely this won’t be the case for many who purchase the X7.

I could go on for days about the Sound Blaster X7. There’s a lot to talk about; however, I feel that this rundown, as well as the pro and con list below, should give you a good idea of whether it’s even a consideration at this price point. Feel free to ask me any question about it in the comment section below and take a look at our list of the best AMP and DAC solutions for the money.

Pros and Cons for the Sound Blaster X7: